Return Of The Idiots

Knock knock!
Who's there?
Tweedledee and Tweedledum! 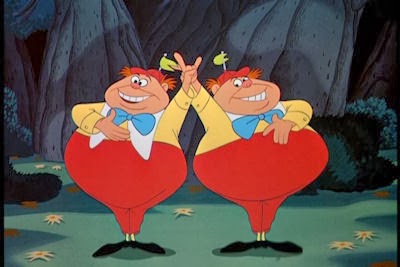 Yes, that's more or less how my evening went down.
Sigh.

That's 3 times this week I've had to deal with these 2 pea-brained buttheads. What's worse is my husband invited them. Way to spoil an otherwise perfect day, Honey! Yeesh.

I was already annoyed by their last 2 visits. Especially since during the last one, MIL complained to Jeremy that she didn't think Raelynn was eating enough food and that she was going to come over and feed her herself. Newsflash to head moron: Raelynn doesn't need people to shovel food into her mouth. She'll be 3 in April. She eats when she's hungry and she likes to eat lots of different things. And she likes to eat those things all by herself. I was happy that Jeremy actually put his foot down for once and told his mother that, no, she could not come over and feed our child; that it was my time with her while I was on vacation and that Raelynn ate plenty of food with me.

Even though he put the kibosh on that one, it still boiled my blood. Thanks for insulting my parenting in my own house. I really appreciate it. Cow.

Our day began as a truly lovely day. We went in for our 12-week ultrasound and were elated to find out that Baby Qu #2 is very healthy and doing great. It put Jeremy in such a happy mood, he suggested we go out for Indian food at the mall nearest to our home in the Wanda Plaza (that's the same mall with the information guy that had no information about the mall he worked in). Raelynn fell asleep in the car on the way there, and quite surprisingly stayed that way even after we took her out of her carseat. And beyond that, as we waited for an elevator from the parking garage with 20 very noisy Chinese people. And beyond that as we walked through the mall. 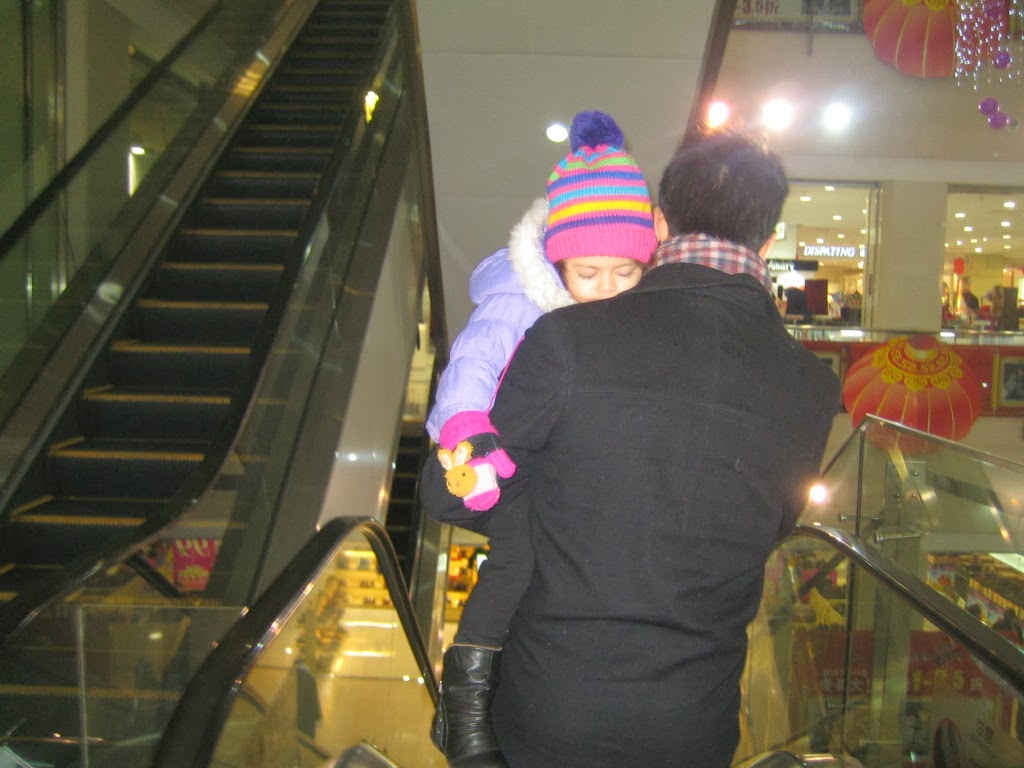 She slept so soundly that Jeremy laid her out on the bench next to him in the booth at the Indian restaurant and she didn't stir. 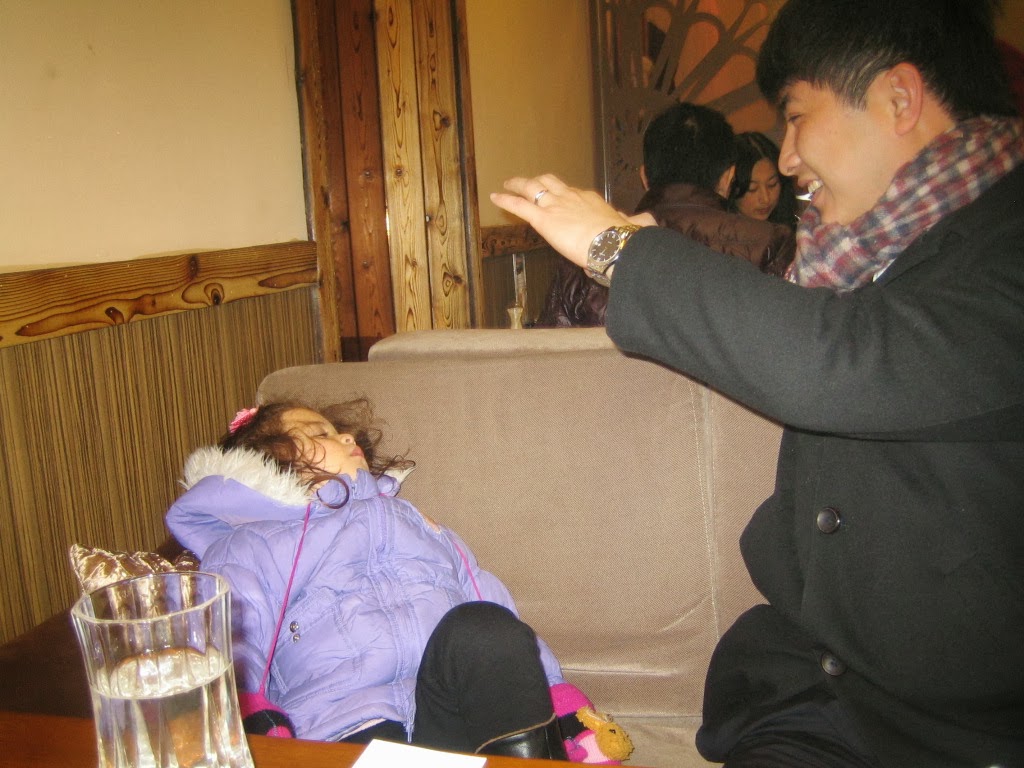 We enjoyed a nice, quiet lunch. So quiet that I even said, "This is the quietest meal we've had since she's been born!" Well, actually, that's not quite true now that I think about it. We did have quiet meals when we went out for our anniversaries without her. But this is definitely the quietest one we've had since she's been born and she has been with us at a meal. DEFINITELY. 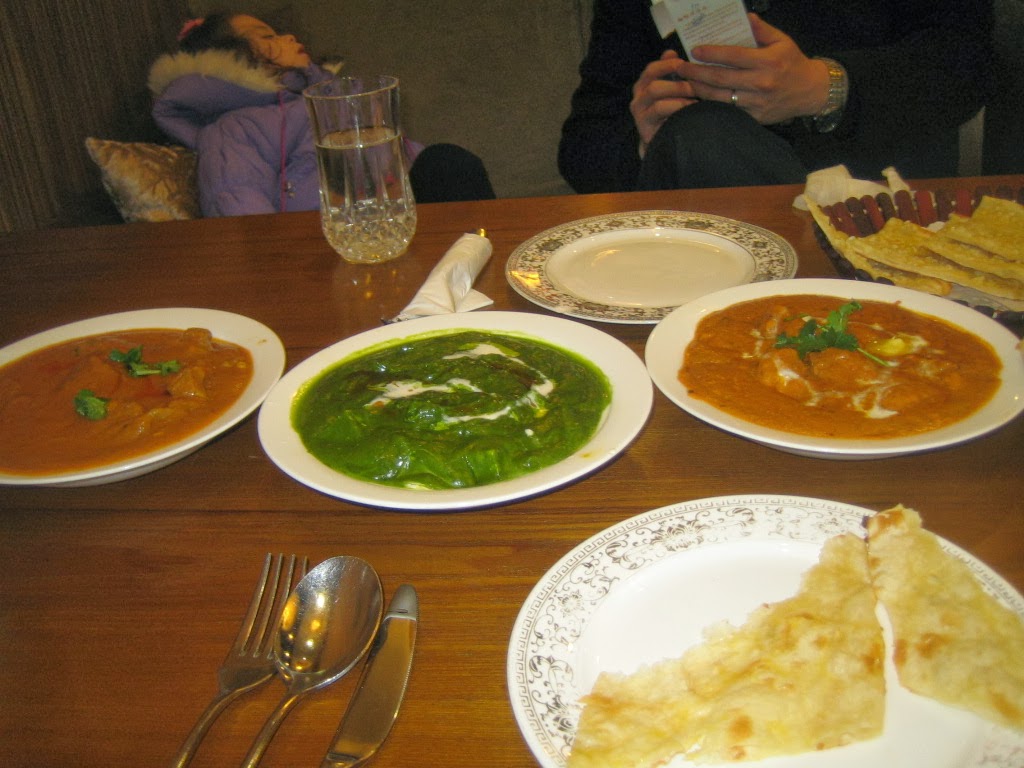 It was delicious. Rogan Josh, which I always want to call Josh Rogan because of the actor, Palek Paneer, which I hope I spelled correctly, and Butter Chicken. All with plenty of nan to soak it up.

We also bought donuts at Donut Stop. We might not have Dunkin or Krispy Kreme. But Donut Stop does a pretty kick-ass job of making delicious donuts. It was the first time we've ever bought donuts from there without Raelynn writhing around on the floor or doing some other embarrassing thing that I'm sure makes everyone in the vicinity question our parenting. She was still sound asleep in her daddy's arms.

Later on though, as evening set in, a shadow was cast upon our fine day. Jeremy insisted on inviting his parents over to see Raelynn. No food was involved this time - I ate the leftovers from lunch and he and Raelynn shared some leftover dumplings - but it was still annoying.

We've been working on potty training Raelynn and when my in-laws come over, they throw a wrench into everything. Instead of going to bed on time, she stays up much later than she should and she's cranky and difficult. Plus, she wants to run around and play with Grandpa instead of sit on the potty. And that I can totally understand. But instead of using his influence for the greater good of getting her potty trained, FIL lets her get up from the potty and goes back on his words constantly. So for example, he'll tell her to sit on the potty or she can't have the balloon he's just brought for her. She cries and he caves in. MIL at least hollers at him for this, but she sounds like a squawking chicken and the 2 of them clucking back and forth at each other is enough to make me go berserk.

So I step in. I tell Raelynn if she wants the balloon from Grandpa, she needs to sit on the potty and try to go pee or poo. She cries and screams and throws a fit. And Jeremy and I don't cave in. MIL looks like she wants to but she actually stays out of it and just watches. Finally, Raelynn comes to me and asks for help pulling down her pants. She sits on the potty and I give her the balloon and an M&M which I also promised if she would sit on the potty. MIL seemed amazed. She told Jeremy she thought Raelynn really listens to me. She said she thinks there's a language problem with Raelynn understanding Chinese. No, dumberella. She understands Chinese perfectly. I've seen her respond to the ayis at play group without batting an eye as they ask her to do things in Chinese. She KNOWS what they are saying to her. She spends every day that I work in the care of 2 people who only speak Chinese. True that she watches English shows on TV with them, they don't just sit inside our home all day every day. I thought it was just another excuse to try to come over and ruin my alone time with my kid.

Well, why doesn't she listen to us then? MIL mused. WHY? WHY??? Because you and your husband (more so him than you actually) constantly backtrack on what you say. Do this or you won't get this. Oh well you didn't do that but here's this thing you wanted anyway. I might not be the world's best parent but I do know that children need limits. Children need to experience disappointment. They need to be given responsibilities appropriate for their ages. They need these things. They need you, the adult, to be in charge. And if you're always a pushover, they are going to walk all over you. Sure, I expect some spoiling from the grandparents. But I also expect them to stand up and call her out on her bad behavior. She will eventually stop crying when she doesn't get her way. And when she does, she will come to you, say she's sorry and be ready to do what she's supposed to do.

My in-laws are nice enough people. They love their grandchild, and she loves them. But every time they come over, I feel like it's 2 steps forward, 2 steps back with Raelynn. I make progress with her and then they come over and I have to start all over again. I'm hoping after tonight's visit, they've gotten the picture and I won't have to constantly redo what they've undone. But I'm not holding my breath.