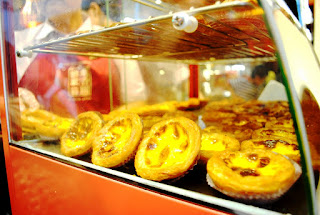 Let me just start by declaring my full on love for egg tarts. I am totally hooked on these things. Chances are, if you try one, you will be too. Oh GOD they're good! They are everywhere here! Here, they call them "dan tat." Yes, I finally found something to not complain about while in China. China is a place that is not known for desserts. In fact, go buy a Chinese-made bar of chocolate and you'll be sorry. It is like fake chocolate-flavored sawdust. Thank goodness for imported goods! Oh but egg tarts they get right. Boy do they get them right!

As you can see from the photo above, they are like mini custard tarts. Some places will put fruit in the bottom which is also quite tasty. I hadn't met a dan tat I didn't like. Until this weekend that is.

My sweet, wonderful husband had gone to a nearby market and found small tins for our oven that were ideal for baking up these delicious little pastries I've fallen so hard in love with. He gave himself away by leaving those out plus leaving the Western-style cookbook I'd bought for MIL to use open to the page about egg tarts. Remember that? She never, ever even tried to use it. Thankfully, Lane has been keeping it from collecting dust. Most of the recipes he's tried from there have come out rather well. But not this one.

After I'd busted him on his plot to make them (and rewarded him properly with many a smooch), he went to work in the kitchen, clanking around as he labored with love to make one of the things I love, while I watched Raelynn who is now attempting the beginning stages of crawling and must be watched closely before she takes off running.

An hour later, we heard the oven ding and we both ran excitedly over to it. Egg tarts! In our own kitchen! As my husband pulled them out of the oven though, something looked off about them. He placed them on a plate and we sat down at the table together to give them a try. I should have taken a photo of our faces, but here are the egg tarts in question: 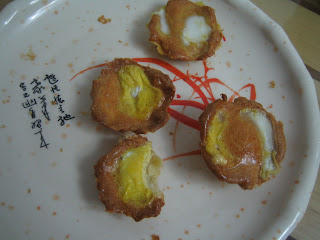 These don't look at all like the top photo of professionally-baked dan tat, do they? Except for maybe the crust. Oh yes. Something was horribly wrong here. It wasn't that it was completely disgusting. Only partially. Just like it didn't look like dan tat, it didn't taste like it either. It was more like an overdone egg souffle.

Here is another look from the side so you can see what it looked like after biting into it: 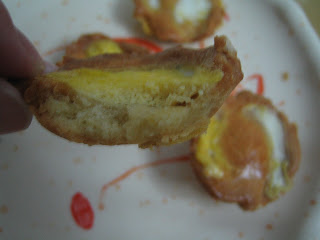 It's SUPPOSED to have a custardy look, feel and taste to it. This looks more like dried out peanut butter cups or something.

Even though I'm a beginner at the Chinese language and can't read many words, I took a look at the recipe my husband used and compared it to ones I'd found online. From the photos, I could see what the problem was. These should be made with just the egg yolks. My husband used whole eggs, which you can see for yourself in his finished egg tarts. You can see the egg whites. That explains part of it. Most other recipes I found called for using heavy whipping cream which I know he didn't use because we didn't have any in our refrigerator. He also confessed he didn't use the sugar even though the recipe he used did call for it. He couldn't offer any explanation to me as to why he did such a thing either.

You might be wondering why then didn't we just go out and buy some egg tarts? Well, in the part of town we live in, there is no bakery on our street or in our neighborhood that sells dan tat. It wasn't early anymore and it was quite rainy. Here, rainy days mean you need good luck to catch a taxi. But today is Sunday, the last day of my weekend. And Sunday is sunny...sunny with a chance of egg tart that is!
Posted by JQ at 11:32 PM