If you missed the first serving of egg tarts (known as "dan tat" in China) that my husband lovingly made for me as a surprise, go here. It's worth seeing for comparison and background on my fascination with egg tarts and a true testament of my husband's love for me that he would go to so much trouble to make them instead of just going to a bakery.

Again, Lane attempted to make egg tarts. How were they? Oh, well...they were much better than that last batch, but they still need some work. Here's some photos: 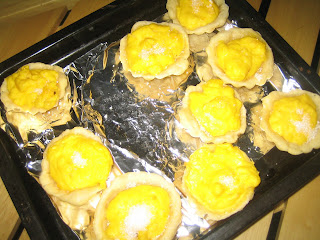 As you can see, these look much more like egg tarts should look, but they're still a little off. The crust tasted a bit too doughy. It reminded me of Play-Doh but thankfully tasted better than that. Oddly, his first egg tarts the other day had a better crust. He said he'd added too much butter by mistake so perhaps that's what did the crusts of these in. The filling was rather yellow and bright. I've never seen them shine like the sun, but there you go. And if you are wondering what that white stuff is on top, it is sugar. My husband forgot to add sugar to the filling before baking them. He remembered just before they were finished and just sprinkled it on top. Oh, Lane. 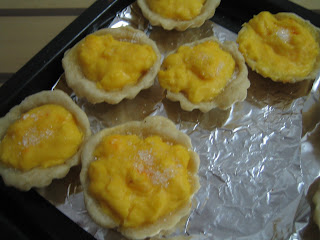 Here is a shot without flash. They are still day-glo yellow!

And now for an interior shot: 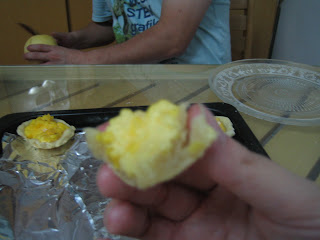 Lane gets major points for getting the texture right! I bet if he'd remembered to add the sugar into the mixture beforehand, it would have been just right. He didn't add enough sugar to the tops of some of them and without it, this batch of egg tarts tasted blah. When I added more myself, it tasted sweet enough but he still has a lot of room for improvement. He gets an "A" for effort.

Third batch will be a charm! I hope so at least or else a certain handsome Chinese husband of mine will be going on a run to a bakery soon. Stay tuned!
Posted by JQ at 3:53 AM