Forgive me for not posting sooner. It's been really hectic over here with redecorating our house (yes, that means we're giving all the in-law interior designs the old heave-ho, which I will devote a whole new post to with photos as soon as possible) and planning for my family's visit in 10 days (which will warrant at least one whole post to itself and quite possibly more as I document my parents' first ever interaction with their first ever grandchild). Add to that one very cute but demanding baby, Chinese lessons and interviewing for teaching positions. That equals one very busy me indeed.

Lately, I've really been trying to step up my game on my Chinese lessons though now that Raelynn is on a bit more of a routine. Plus, MIL misunderstood my meaning the other day and became upset and left in a huff. I know, I know. You probably think I was happy to see her go. I would have been if I hadn't accidentally offended her somehow. It seriously wasn't my intention but in any event, now that all is well again in the Qu family, I'm working hard to build my vocabulary and grammar faster so that we don't have any more misunderstandings. I might not like her and I especially might not like her watching my child, but she's free daycare and she loves the baby. If I get hired for this job (we'll hear in a few days whether or not I get the high-paying teaching gig), we need her to keep an eye on Raelynn. 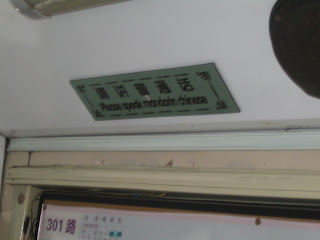 Yes, it says "Please speak mandarin chinese" (and they didn't even capitalize "mandarin" or "chinese" which was irritating on a whole different level). I love this! I asked my husband about it but he wasn't certain why they would post a sign like this. For one, if you can read the English, it is quite likely that you don't know Mandarin Chinese. Or you're like me and don't know enough of it to solely speak the language. For another, if you can read the Chinese characters, does that mean that people from Hong Kong, who use the Cantonese dialect, should just keep their mouths shut? I'd also like to point out that as we got on the 301 bus, my husband was speaking to one of our Korean friends in, you guessed it, Korean. Oh we're such rebels you know. It was nice of the lady collecting the bus fare not to kick us off.

It reminds me of the whole hullabaloo that went on in the states a few years back (well, more like 5 years ago) at that famous cheese steak spot in Philly. The owner had put up a sign that said "This Is AMERICA: WHEN ORDERING Please 'SPEAK ENGLISH.'" It was later ruled that he didn't violate any ordinances by posting this sign. In China where disorder is always served up fresh each day and laws don't really exist, no one cares if we as foreigners are offended. No one cares about our human rights or whether we understand or not. America isn't the only country with a diversely growing population, but in America, people are desperate not to offend anyone for fear of litigation. Here, you are forced to learn the language or forever be left open for interpretation. Which basically means speak Chinese or DIE...on the 301 bus at least.
Posted by JQ at 5:06 AM