If you've read my blog before, then you know that despite how much I love my husband, I miss America and all my family and friends there. China is a bit difficult of a place to love, but it is my home for now and I've got to try to make the best of it while I'm here. One bone picked from my entire skeleton of contention has been our home. It was a gift from my in-laws to "Lane" and me, and though I know you shouldn't look a gift horse in the mouth, I felt like it wasn't really our home since it was still chock full of their craptacular decorations. From wall hangings to dishes, this place was overrun with poor decor. Plus, the constant invasion of my privacy (both before and after Raelynn's birth) has worn on my nerves.

Now I'm pleased to announce that we've been making it a home of our own. That means out with the in-laws and in with things that make this house outstanding and truly our own home. While there's still plenty of things left to fix, I finally feel like our home doesn't look like some cheap, tacky Chinese restaurant on the outskirts of town with discount wonton soup. Step right up and take the grand tour! Follow me, please... 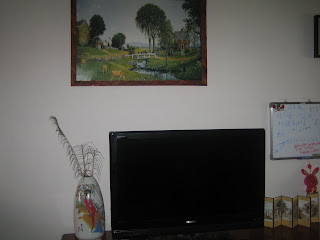 First up on the tour, we removed the large piece of lighter wood furniture that had originally housed the TV and moved the darker, smaller piece there. Yes, the light wood furnishing is gone. I didn't hate it but it took up A LOT of space. The vase to the left of the TV was actually here before. It was one of the few things I did like. The shade to the right of the TV is new as we picked it up in Korea. But the main attraction here, folks, is the artwork above the TV. Let's go in for a closer look, shall we? 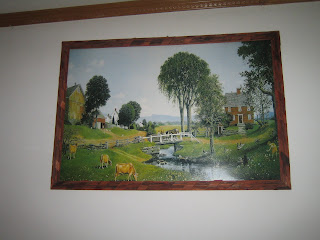 It's some sort of farm scene, complete with cows. "Lane" picked this out as a surprise. Not what I was expecting but at least it's much, much, MUCH better than the framed flower needlepoint that had been up there before. I'm actually warming up to this. Besides, HE likes it and it's OUR house, not MY house so he should get a say in what goes up on the walls. I'll say something else nice...I like the frame too. 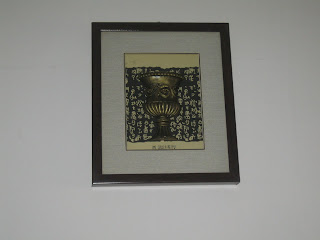 Next, we have this really pretty shadow-box art. I was so happy when he pulled this one out. Great job, Honey! 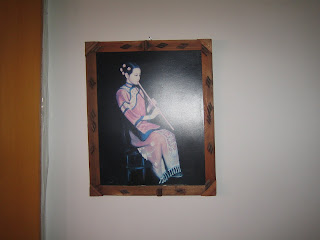 This doesn't suck either. The frame matches the larger farm piece too. I rather like it, actually. It's so much nicer than anything MIL has ever picked out. The poor thing just has bad taste in everything. I'm relieved that she no longer has jurisdiction over how our house should look. Hooray! 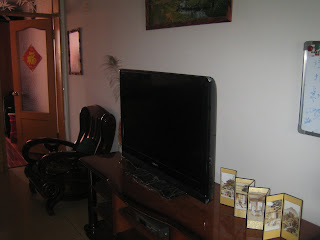 Here is a different angle of the living room so you can see the wood furniture better. 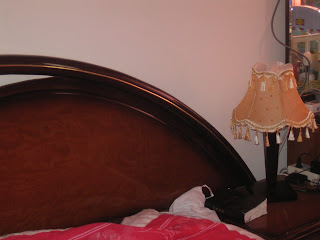 In our bedroom, my husband added this awesome lamp. I love it! It's kind of feminine without being overly girly. The fringes make it fun too, though if I think about it too much, it vaguely reminds me of that leg lamp from the movie A Christmas Story. Oh well. I still adore it! 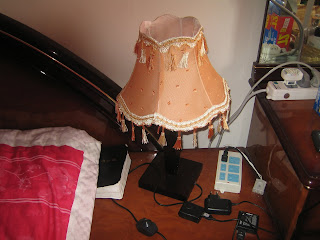 Here's a closer look at the lamp. There's just one thing that sucks about it...my husband only bought one! And this is on HIS side of the bed! "Lane!" How could you??? We should have matching bedside lamps. I'm still stuck with the 1960s-version-of-what-the-future-looks-like-lamp on my side, which is shown in the pictures further down in this post. 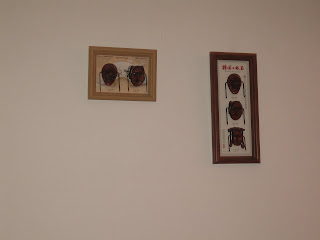 These Korean masks are over our bed now. The smaller one was in our living room before. Then as we were organizing some things, I found the longer piece. I felt they'd make a lovely addition to the bedroom. Incidentally, these replace that horrible framed ship artwork that was above the bed. We did away with the flower tea party one as well but just kept the wall blank where it was. Hopefully that ugly ship picture has found its way to a sea shanty somewhere in hell. 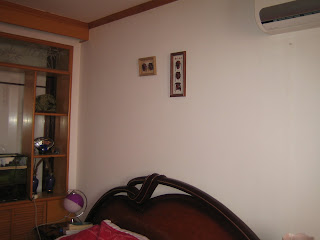 Here's the Korean art from a wider angle. You can see that dreadful bedside lamp that I referred to above that is still on my side of the bed. But wait...something is missing! Can you tell what it is? 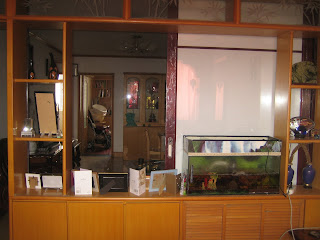 Glory, glory hallelujah! That 70s style curtain that looked like it partitioned off beds in a psych ward is GONE! So are the frosted glass panels that didn't shut all the way. Take a look and refresh your memory... 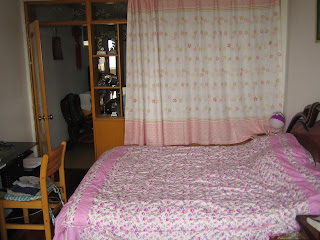 The grandma-style comforter is also long gone too. I almost forgot about that, or perhaps I tried to block that vile pattern out of the corners of my mind.

Yes, there is something much prettier and much more efficient providing us privacy in our room... 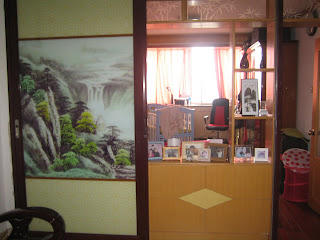 It's these beautiful sliding doors! And they rock! I love them! 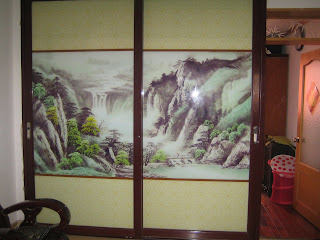 Here they are closed for the full effect. I think the picture of the waterfalls is really pretty and adds a nice element of Asian class. My husband did a fantastic job picking these out. Happy wife, happy life! 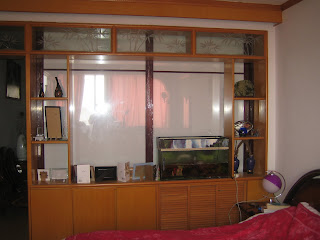 Here it is with both doors closed from behind. We moved the fish to face this way instead so they weren't constantly blocked with one of the doors. This was a simple solution to a major problem. We really like the built-in shelves there in the lighter wood, but we just don't like them THERE. It was so stupid for my in-laws to ever design this home in such a way with no real wall separating the living room and master bedroom. But to remove that thing would cost a fortune. There's also a radiator in there so it would be a huge pain to completely tear apart. Thank you again, Honey. Honestly, it is pure bliss to slam these shut when MIL is here. I can't see or hear her and for that, I am sooooooo thankful! 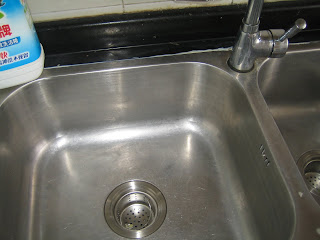 So, I know this might just look like a sink to all of you. And well, it IS just a sink. But now, it is a very special sink. The other night while we were cooking, we noticed water all over the floor. I noticed water all over the kitchen floor the night before too, but I thought I'd spilled it out of the big pot I'd been cleaning. Turns out, the pipes under the kitchen sink were leaking. What else is new in this crap shack? It is always something with old pipes, light switches and anything else built into the walls. I should point out this place is only 10 years old, but just like my in-laws, it seems more like 100 years old. Anyway, my husband called a repairman right away and before I knew it, he'd fixed the pipes. AND, he installed food traps in the sink. Over here, no one has garbage disposals, which is one of the things I miss most about living in America. In our kitchen, I was constantly complaining about how the sink would get stopped up because SOMEBODY (coughMILcoughcoughcough) would just shove food down the small grated openings in the sink. I'd have to use a chopstick to poke everything that had fallen through down the rest of the pipe, which was just nasty. These make it so much easier to catch the food and toss it out properly in the garbage. I would of course prefer a garbage disposal but over here, this is the best we'll get. My nice chopsticks are rejoicing since all they have to worry about now is if MIL will use them in the wok and burn them again (which is a huge peeve of mine...use the fucking spatula! Sheesh!). 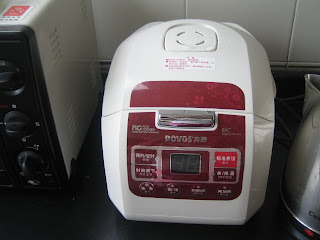 Making friends with our little oven and the electric kettle is our new rice cooker contraption. We had this old, clunky awful thing before that would shoot out steam and water everywhere. It was very difficult to use and it took up so much space on the counter. This is China though and with a Chinese husband in the house, I simply must have an easy way to make rice for our meals. I love this thing. You probably can't tell, but the buttons are in Chinese AND Korean. So if I forget what button to push, I can at least read the Korean and figure it out. Plus, it's sleek and stylish. Win-win! 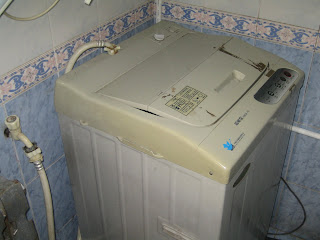 This is not sleek. Or stylish for that matter. But it works! It's our new, used washing machine. When I documented how my MIL makes a mess of our home, there was a photo of our old washing machine in there. Let me just tell you how much I despised the old machine. For starters, it was literally one step above scrubbing everything by hand. You had to manually add water to it, manually drain it and manually spin it. Oh yes. It was horrible. And on top of that fresh hell, it would tangle all the clothes into one massive wet knot that was oh-so-fun to undo. It also had a penchant for tearing your clothes to shreds which is why I never put anything I liked into it and would just hand wash anything that wasn't an old t-shirt that I'd wear to sleep or while lounging around the house. After it ripped the entire strip of fabric where all the belt loops are off of a fairly new pair of my husband's slacks, it went to die quietly somewhere. Just kidding! Knowing this country, someone probably picked it up and is having it wreak havoc on their wardrobe as I type this. This washing machine pictured above was actually in my in-laws other rental property. I was so annoyed that no one brought this one over sooner. 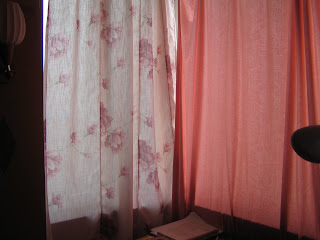 But as I mentioned before, we're still in the process of fixing up and removing the ugliness that once was. This flower curtain is a prime example of said ugliness. The pink curtains cover the 2 large main windows in our bedroom. Just like the vase by the TV, the pink curtains are one of a few things in this house that I actually like. For whatever reason though, my in-laws never used a curtain to cover this side window which, without covering, causes our room to become unbearably hot. "Lane" and I had decided to do something about it but before we even had a chance, MIL ran out and bought this barfy curtain which feels like it was made from a burlap potato sack or something. It doesn't match, which is like her trademark at this point, as are the stupid flowers, making me feel like I am permanently trapped in hell's waiting room.