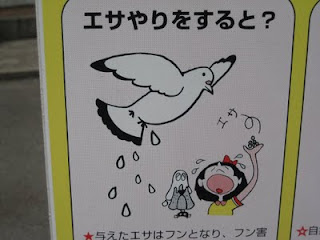 This photo of a sign in Japan, courtesy of Picasa Web Albums, that depicts a little girl being pooped on by a pigeon strangely sums up my feelings exactly.

Yesterday, my sweet husband went to the store and the market while I dealt with a cute but poopy-pants baby. Upon his return, he beckons me to the kitchen to see everything he's got. He's so proud too, as he shows me the goods.  Black pepper! Oh hooray! I had asked for pepper before but MIL, in an attempt to be useful, got spicy Szechuan pepper instead. It's not bad but it doesn't work with mashed potatoes, for example. He also got sesame seeds which were another pleasant surprise. He shows off a variety of things from vegetables and butter to a brand new tea set, and then he pulls out a package of something and tells me it's "pig-on" (which was his actual pronunciation).

"Pig-on?" I inquire.
"Yes," he says smiling proudly.
"Do you mean 'pigeon?'" I ask him.
"Oh," he answers and I can see him mentally taking notes on the pronunciation. "Yes, that's it. Pigeon." He's careful to say it just like me.
"You brought home pigeon for lunch?!?" is my incredulous response.
"I make for you!" he says with a happy smile and I mentally paw through our refrigerator for a back-up plan. 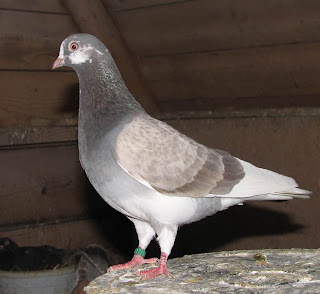 Who's hungry? Yeah, me neither! Blech!

Only I didn't need one. He whipped up some pork chops which were awesome, despite he served them with a side of ketchup. Also on the menu, a potato pancake-like creation which won my praises as well. And then, there was this soup. It had potatoes and onions in it and what he claimed was "pigeon." Though it looked like something familiar, I couldn't place it. And it smelled familiar too. Do I smell pigeon? He spent a great deal of time making this lunch for me, so despite being terrified of eating the rat of birds, I took a teensy bite. And to be quite honest, his soup turned out wonderfully. He'd used the cookbook I'd bought for his mom that she never uses so it was nice to see it put into action. He proudly showed me the recipe he used too, and even though I cannot read Chinese, thanks to the photos in the cookbook, I finally figured out that what he thought was pigeon was actually BACON. Oh yes. MUCH better than pigeon.

The next day, I wasn't so lucky with lunch though. Lane thawed out what he THOUGHT was some pork. I should interject here to explain that when we moved into this house his parents gave us, we inherited even more than ugly artwork and filth-encrusted items. We also got a freezer full of unidentifiable meats, some that have likely been frozen for years. Oh. Joy! I have been begging my husband since we moved in to either toss this crap, particularly the items that are freezer-burned at least. Or to label them with what they are and the date they went in so we can efficiently use them. I've had this happen to me on many occasions. I take out what I think is pork and I wind up with a bag of chicken heads and feet. Which is just what he thawed out, thinking he'd be preparing pork. Wrong. Wrong. Oh so wrong! He decided not to waste it and prepared it though. Meanwhile, I'm seething because I asked that old troll to take her bag of heads, tails, feet and Lord knows what else out of our freezer. But she never did because, surprise, surprise, she's a senile slob. As my husband took a phone call, he asked me to go stir the pot of chicken. When I did, I saw a black claw-like foot emerge and I quickly retreated from the kitchen in fear. Like when Roy Scheider's character in Jaws comes back and says the famous line, "We're gonna need a bigger boat." Suddenly, I wasn't hungry anymore. Perhaps pigeon would have been better. Unless MIL made it...remember this? 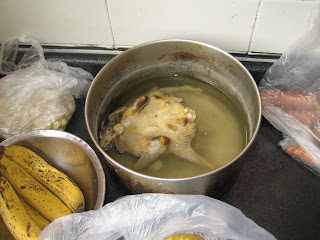 Oh barf! She is just SO gross.

In any event, I stuck to the tomato soup and salad that he made, which was free of nasty chicken parts and full of good taste. And later, I showed him what true love is by making him chicken fricasse. 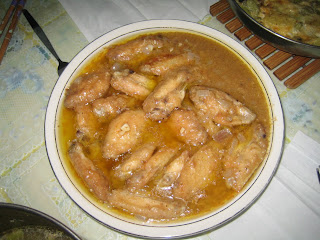 It was so incredibly delicious that my husband asked me to make it again. And soon. I had to wipe the smile off my face when, while we were eating the leftovers for lunch, he served some to MIL and told her how fabulous it was. Take notes, MIL. THAT is how you cook a bird. But please, please, please...NO MORE PIGEONS. Bacon, however, is more than welcome in this house anytime.