The Kitchen Gods Must Be Crazy 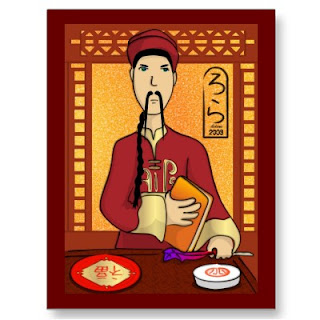 The other day, I was busy cooking dinner in our kitchen. This is nothing new. I spend a great deal of time in there and quite happily do so in order to make us food that doesn't suck (like MIL does). But on this day, it was much more enjoyable because my husband was home keeping Raelynn occupied. When it's just Raelynn and me, it takes me 100 times as long thanks to her whining, crying and fussing. I put her in there with me in her little chair and she coos and seems entertained by my running commentary on what I'm doing. But then, perhaps due to having food-envy (which I've coined as my original term to define what it is when I make or eat food in her presence and she just has a spaz until I feed her again...even if she just ate), I've got to cease and desist and handle my precious daughter.

Yes, this day in the kitchen was enjoyable indeed. I could get everything finished within an hour. But as I put everything on plates and began the procedure of schlepping it all to the table, I felt something. Like I was being watched. I looked up, and to my great amusement, as I gazed into the kitchen window of the people next door, I noticed a Chinese woman gaping back at me. It absolutely amazes me that these folks have never seen a white person. Don't they watch TV? Or maybe they just thought we were made up like gnomes and minotaurs. She was a little older, perhaps MIL's age, so maybe she believes in the Kitchen God. If she does, she most certainly is praying to him right now.

Here is a look at their kitchen from our kitchen window: 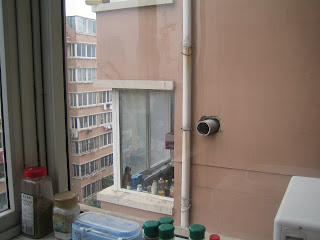 And here's a more zoomed-in view: 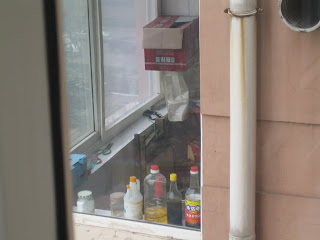 Look at this mess (or 'disorder' as Lane calls it)! It's like MIL and her should TOTALLY be best friends. Our kitchen was like this when we first moved in here, though based only on what I can see here, the neighbor's kitchen isn't quite as bad. FROM THIS VIEW at least. I'm willing to bet this woman keeps her vegetables on the counters and stores cooked fish in the cabinets instead of the refrigerator. I feel like flies would be right at home in there, am I right? She also has the obligatory giant bottle of soy sauce, along with all the same lame sauces all Chinese people cook with, and that oil you see is peanut oil. Because they just have to cook with the most horribly fatty one of all. MIL kept using it despite my protests until I tossed it out. Bwahahaha! Anyway, I am now convinced that keeping your home in a disgusting, slovenly state is a Chinese tradition of some sort. And if it is, it is the one that I would like stricken from the heritage, please.

Oh, and in case you're wondering, no, I didn't flick her off. I pretended not to notice her, eyes widened, mouth agape, gawking at the sight of a white girl in this neighborhood. I pitied her too much to retort with a lewd gesture though as I brought dinner out to our table, I had a great big urge to go back and wave big and make funny faces at her. Sadly, she'd left the kitchen, probably making an offering to the Kitchen God in hopes of keeping him from going crazy again.
Posted by JQ at 12:33 AM