The 10 Most Irritating Things My MIL Does 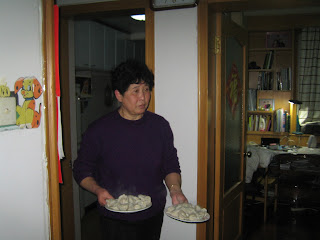 I should start off by saying that I don’t hate my mother-in-law. I really don’t. She’s a very nice person. That being said however, I find her impossibly difficult to deal with at times. I know, I know...I should be grateful that she is so nice and that she didn’t forbid her only son to marry a non-Chinese woman. And to her credit, she really does try hard to adapt to having an American in her family. But some of the things she does truly grates on my nerves. Maybe my tolerance to her is low due to my pregnancy hormones. Maybe it is the language and cultural barrier. Or maybe she really is as annoying as I think she is. With my due date fast approaching, one thing is for sure, we’re about to find out!

What does she do that drives me so crazy? Oh, let me count the ways:

1. Putting perishable foods in the cabinets. With the dishes. Yes, she does this. She does this much less than she used to but I swear, if she comes over and I don’t check our kitchen cabinets where the dishes go, I can almost guarantee that she’s stuck the remainder of a fish she cooked for lunch in there. 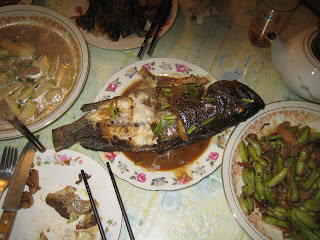 2. Storing perishable food outside on the window ledge. While I have to hand it to her that in winter when it is freezing outside (and sometimes snowing) this is pretty clever. It is definitely cold enough here to do such a thing. Though I’m not wholly on board with it, being brought up in a country where you put things that need to be cold in the refrigerator or freezer.  I let it go initially, since it was so cold outside, most of the items froze. Until one day I saw a bird come up and start snacking on everything. Then I asked that her outside ‘refrigerator’ be removed permanently.

3. Buying inappropriate/stupid items for the baby. In China, it is against the law to reveal the gender of a baby to an expecting couple. This drove us nuts at first but with so little time left, it’s kind of neat not knowing. As you might have guessed, my in-laws are quite excited for their first grandchild. However, my MIL will go and buy clothes that are pink. HOT pink. While blue could work on a girl, I’m not so keen about putting a boy into bright pink without his expressing a fondness for the color.  Even worse though is how she tried to tell me there are no mattresses for baby cribs in China. THEY MAKE THEM HERE! Despite my conversation with her (aided in part by using the Google translator) where I told her that babies cannot sleep on soft items and need firm mattresses, she continued to epically fail in this area. She MADE a ‘mattress’ which was nothing more than a large blanket. A blanket too large for the crib. And too soft for the baby too. I had to suppress the urge to scream. She also bought a pillow for the baby. I had to suppress the urge to cover her face with it.

4. Completely demolishes my good housework within minutes. See my previous entry including photographic evidence of how she fucks up my clean home, particularly my kitchen.

5. Cooks the same things all the time. I love to cook. Love it! I feel creative and fulfilled when I do. And nothing makes me happier than to see my husband’s face fill with pure satisfaction when he takes the first bite of something I make. I’m not my mom, that’s for sure, but like her, I have the ability to combine various ingredients into different dishes. And I try not to make the same thing every day, or week for that matter. My MIL surely can make dumplings which are quite tasty. But she’ll make them too often. It would be like my mom making her signature dish every day. I doubt my dad and I would be so happy to eat it if it were served to us with such frequency. Other times, she just makes everything too salty. Cuisine here is quite different than the Chinese food you get “Americanized” in the states. For one, at Chinese restaurants in the states, many different regions are combined on the menus. Sichuan and Cantonese, for example. But my MIL only seems to know how to make things with brown sauces. Mostly soy sauce. And often, she fries everything. So in the rare chance that it does taste good, it’s not healthy. But mostly, it’s the same shit, different day, and hence why I cringe when she insists on coming over to cook for us.

6. Pees with the toilet seat up. This is a Chinese woman thing. They use these horrid squatters here, which, if you’ve never seen one, are like porcelain holes in the ground as you can see in the picture below (from the Google Picasa album). But in homes, many people have toilets. If you’re out in public and have to use the bathroom, you’re lucky if you find one with a toilet and not a squatter. And whichever one you do find, you’re luckiest of all if the bathroom happens to be clean! But you’ll note that many women here will leave the seat up if they use the toilet before you.  They actually squat over the toilet! They are worried about the dirtiness of the toilet which cracks me up since people here don’t exactly do the best job cleaning things. Still, in our own home, she shouldn’t be afraid of germs especially since I’m the one that cleans the toilet. Especially since I’m the one that actually bought toilet bowl cleaner to clean it with. She never once used any cleaning agent on the toilet (or the sinks, or the floors). That would explain why it took me forever to polish everything to a shine the first time I cleaned our home.  Oh, and she also doesn’t flush the toilet either…she throws a bucket of water down it to flush it which means she’s splashing pee all over my bathroom. Thanks, MIL! 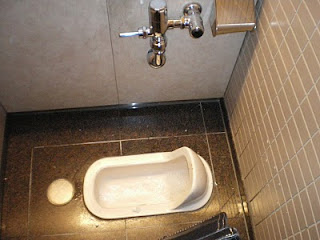 7. Chews too loudly. Maybe I’d give her a break on this one if I weren’t pregnant. But the sound of her gnawing on food is enough to put me right into a murderous rampage. My father-in-law is also guilty of this offense.

8. Uses the last of a vegetable or meat I had planned to use for our dinner. For weeks, she kept either using all the spinach or all the mushrooms, thus thwarting my plan to make stuffed mushrooms for my husband. It almost became funny to me. Almost. Being this pregnant and new to the Chinese language, going to the market alone is a bit too difficult at this time. Thankfully, my husband ran out one day after she’d pillaged my kitchen and I was finally able to live my dream of making stuffed mushrooms. And they kicked ass.  Just today though, she wasn’t even here and threw a giant wrench into my cooking plans. She used ALL the garlic. All of it! By the time we discovered this, the market down the street had closed and I had no choice but to go on without garlic. Dinner tasted quite good despite her inadvertent sabotage but it would have been absolutely perfect with garlic.

9. Is frugal to the point of being ridiculous. I get it that here, we’re in a developing country. And my in-laws are more minded like my depression-era grandparents were than how my own parents are.  Sure, it’s wise to save money but to not spend any money at all makes all that hard work pointless. What if you got hit by a bus tomorrow and died? I know, grim, but the way people drive here, it is a daily fear of mine. What if you saved every penny and never once went out to eat, even at a cheap restaurant? My in-laws never do anything to enjoy the fruits of their labor. And they pick the wrong things to be cheap about. When they designed this apartment (long before giving it to us as a wedding present), they decided to try to save money by NOT having hot water in the sinks. Yes, that’s right. They thought it was perfectly acceptable to wash dirty dishes with cold water.  Um, just because you can’t SEE germs does not mean they don’t exist! My FIL, being very handy, was also to blame for many potential fire hazards in our home. We recently replaced some old power strips in our home thanks to one shorting out. Xiaolong and I decided to just replace them all. When he dug back behind the entertainment center, he came out with a tangle of wires. My FIL had tried to retape the wires back into old power strips. I should have taken a photo of this but I was too stunned at the time. The next time my MIL showed up and saw it in the trash, she actually tried to dig it out of there! Augh!

10. Has the worst taste in fashion and home décor. No doubt if you’ve read my previous post about her demolishing our clean household, you’ve seen some of her decorating choices. The grandma-floral patterns. The stupid open wall. The ugly artwork. But I’d rather let her choose the pattern of our linens than to ever let her choose clothing for my husband, baby or me. Again, I do recognize she means well. But a fashionista she is not. Actually, this is so awful, it deserves its very own post so stay tuned!