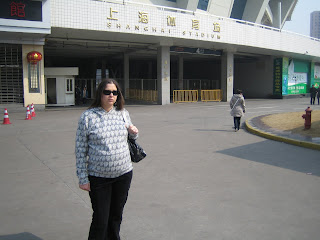 A very annoyed and pregnant me stands in front of the Shanghai Stadium in February of 2011, giving my husband the look of death because my feet hurt from walking and I have to pee yet again.

As my pregnancy draws to an end with my little one ready to pop on out of here at any moment, I can’t help but think about the things that I’ve loved about being pregnant. How fresh-faced my skin has looked. How shiny and thick my hair has become. My gigantic boobs. And most rewarding of all, how amazing it feels when my baby moves around inside my belly.  I try to think of these positives in this last month where everything I do is a struggle just to stay comfortable.

Overall, I’ve enjoyed the experience of being pregnant. Though I could definitely have dealt without the roller coaster of emotions brought on by my hormones. Suddenly, sweet songs make me sob. Going from anger to hysterical laughter in .5 seconds. And the general feeling of constantly being agitated. That’s been the worst by far. I am not usually this easy to annoy. But throughout my entire pregnancy, I’ve had a tendency to be one grouchy gal.

In an email with my friend Chrystal who was kind enough to listen to my complaints about my MIL and share how her own experiences were when she was pregnant with her son, she summed it up quite perfectly. She said something to the effect of, “I never thought that someone’s good intentions would irritate me so much.” It really struck a chord with me because we all know from many of my previous posts what the most irritating thing has been in my life over the last 9 months…MY MIL! Everything she has done has grated on my last, poor, raw nerve. Clearly, she takes the cake on my list of things that have greatly annoyed me during my pregnancy. So now that we’ve got that out of the way, what are the less obvious annoyances?

Moronic comments from strangers.
Before we moved to China, while still in Korea, when I was just starting to show, random strangers would come up and ask me (in Korean) how far along I was. I would answer and then they would say something like, “Wow, you’re really big for x amount of months pregnant.” So, I’d ask them their age. And then I’d tell them, “Wow, you’re really stupid for x amount of years old.” Every woman’s body is different. So every woman will carry differently. Some bellies pop out earlier than others. The people of Asia tend to assume that all Americans are just fat. What they don’t realize is that most Asian women have longer torsos and therefore, more space to accommodate a baby before their bellies pop out.  They also don’t realize that in our culture, saying something like this is considered quite rude.

Even worse, foolish comments from your own friends.
Speaking of rude comments, it seems men in our own culture are quite idiotic themselves when it comes to their pregnant friends. Yes, you know who you are, fellas! It seems my guy friends fancy themselves comedians with comments like, “Wow! You’re huge!” and “Are you carrying a litter in there?” on my Facebook page. My grandpa always said to “consider the source.” So, when I do, I realize that my guy friends who think they are funny must be insecure with themselves. After all, what else could it mean when they make a comment like that and they weigh more than I do while I am carrying another life form inside my body?

Comment bombs.
What is a comment bomb? It’s when you have a comment thread going on your Facebook page about a certain topic and then, out of nowhere, one of your friends randomly comments on that thread about something completely unrelated. With my pregnant hormones, this one annoys the living daylights out of me. Stay on topic! Or at least start that way and segue. Otherwise, start a new comment on my page or email me about it. It just drives me absolutely nuts!

Heartburn. EVERYDAY.
I was lucky. I had only had heartburn twice in my whole life before becoming pregnant. Now, it is a daily occurrence. That and vurps. You know, when you burp and vomit a little? I don’t know the technical term for it but I call it ‘vurp,’ meaning ‘vomit burp.’ Some nights, it keeps me up more than the baby’s kicking and my husband’s snoring combined.
Clicking noises.
I love my husband very much but he is the biggest offender of this. He likes to click his pen open and closed. And even more so, he likes to make a clicking sound with his tongue while he reads, uses the computer or watches TV. It is so completely distracting when I am trying to read or write. He’s endured a few episodes of my outbursts of the “WILL YOU JUST BE FUCKING QUIET? HUH? HUH? HUH?” kind which makes him a saint, but that sound has me literally jump right out of my skin.
People with too many cumbersome items taking the bus.
In Korea, we had the subway. Here, one is being built but it will take a few more years until it is complete. So our options are buses or taxis for transport. My husband desperately wants to learn to drive but I’ve begged him not to learn here. People here are the absolute worst drivers I have ever seen, even worse than in Mexico! I don’t mind the bus here despite it often smells. People here are rather nice to pregnant women and will jump right up and give you their seat. In Korea, it was almost always another woman who gave up her seat while the men just sat there uselessly. But here, almost every time I take the bus anywhere, there is always some jackass who has huge bags full of vegetables or a massive stroller that just has to squish their way onto the bus, making it impossible for others to get on or off quickly and easily. Taxis are not that expensive here at all. If you’ve got that much shit, just spend the money and take a taxi! It’s worth it!

And perhaps the most annoying thing, staring.
America is a country made up of foreigners. Most Americans don’t bat an eye when they see people from different countries because our country is made up of all kinds of people from all kinds of places. But in China, people only know Chinese people. Or at very least, other Asians. So when they see white people, a great many of them stare. Add a black person and they are transfixed. And some of the older people just stare when they see my husband and me together because they cannot understand a mixed relationship. I swear, people stared much less in Korea. Maybe it’s because they stare more here or maybe it’s my hormones but I just get so agitated when people gape at me open-mouthed like a bunch of yokels. This is why my husband taught me to say, “Ni de yi ci kan bei ren ma?” Which means, “Is this your first time looking at a white person?” He also recently taught me, “Bu guan ni de shi,” which is the rudest way to say “mind your own business” and “bu yao kan le” which means “don’t look at me.” All of these have been the perfect remedy for this kind of annoyance. As for everything else, I am hoping my hormones balance out and that having my precious baby in my arms turns my frown upside down.