Last I checked, we are not impoverished. We are not living on the street. We might not be the richest people in the world, but we have many things to be grateful for. Food. A nice home (albeit in an old neighborhood). Clothes. And if you're my daughter, Raelynn, you have the nicest clothes in this house.

Raelynn has so many nice clothes. I must admit, I'm a little envious. She's gotten so many adorable things thanks to her aunt and uncle and from her Papa and Mimi. And we buy her nice pretty stuff too. Despite having a closet full of lovely clothes though, MIL keeps insisting on buying shit like this. Or this. Or THIS. 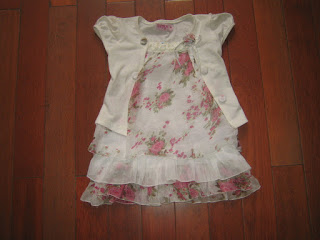 I know...you're looking at it and saying so fucking what? Aside from that it looks like a miniaturized version of what an old lady would wear to church on Sunday, it's not so bad. Oh? Please, come take a closer look... 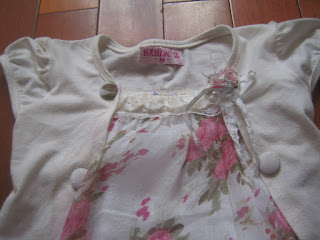 If you look more closely, you'll see that bow-thing is shredded and this is stained. Is this used? Did another demented elderly relative give this to MIL and she was being nice dressing her in it? No, no. She had to have done this herself. So did she buy this stained and frayed like it is? Or, has she been sneaking it over in her hag-bag, nestled between the potatoes and luo bo?

I don't even know what to do anymore. I am so tired of her shenanigans. I just want to shred this into strips and shove it down her throat. I let those 2 pairs of green pants with the stars slide. But this? COME ON. Even if you did buy it new and it's now like this, this is the kind of thing you throw on the kid when she's eating mangoes...NOT the nice, new clothes in her closet. ARGH!

I almost threw it out the window. I really had to stop myself. For one, because it would have fluttered down below Raelynn's window, which is on the same side of the building as the entrance. The troll would see it and just pick it up, put it back with the produce and garbage she carries with her in her bag and carry on her merry way of pissing me off daily as she clomps her goat-faced-self up the 6 flights of stairs. I thought about throwing it out our bedroom window but I know one of the other old bags in the building would see it and think we dropped it by mistake, returning it dutifully to us. Why couldn't they just steal it for their grandchild?

Since I found it crumpled and lurking in the crib with 3 fucking blankets (it is SUMMER...why in fuck my daughter needs 3 blankets to take a nap during the summer is another fucking mystery), I accidentally-on-purpose dropped it through the slats in the crib on the side facing the wall and there, it conveniently fell right into our extra baby bathtub. I doubt the old cow will look there, and if she does, I can be all "oopsy poopsy." Take that, cow!