Look Before You Drink!

My husband is in the good habit of taking water with him wherever he goes. He loves to use this thing: 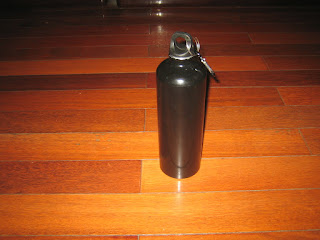 Unfortunately for my husband, our toddler daughter very much enjoys using anything that belongs to Daddy. She likes to get into my stuff too, but Daddy's stuff is absolutely irresistible to her. His phone. His keys. His bag. His computer. His plate of food. Yes, everything that is Daddy's is Raelynn's too. Especially this water container. Sure, she has her own cup, but she refuses to drink from it when Daddy's cup is around. Here it is with the top off... 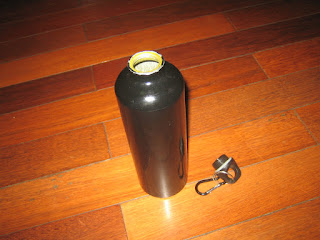 And just like any active toddler, Raelynn also loves to put things into other things. She'll drop bits of her dinner into her soup. Or her cup. Or your beer, if you're over having dinner with us. Once she scared me half to death by putting one of her toys into my snow boots. I nearly jumped through our ceiling until I realized it was just a toy.

It doesn't take a genius to see where I'm going with this, does it?

The other day, poor Jeremy started to drink from his water and nearly choked as something flew into his mouth from the bottle. THIS thing: 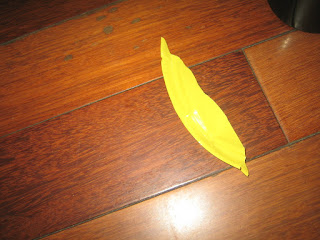 Check it out with no flash below... 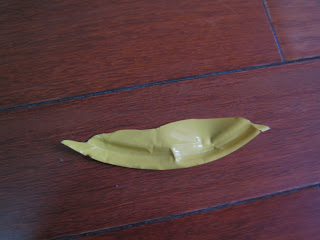 Thankfully, he has such a great sense of humor. As he pulled this out of his bag to show me what he damn-neared swallowed, I burst into hysterical laughter. This is a piece of a toy drum Raelynn has that she (obviously) broke. But then she broke the plastic down further into this strip. I could have sworn I'd thrown it out, but her idiot grandparents must have let her take it from the garbage...how nice.

At least this incident serves as a reminder for us both (mostly for Jeremy though) to look before you drink. Lord knows what she'll try to shove in our beverages next!
Posted by JQ at 9:01 PM