Found: Engrish Snack In My Kitchen

The other day, I discovered a package of Chinese cookies that look a bit like mini-Nilla wafers. Remember those? Well, these don't taste as good. But they're not completely disgusting. I've been working hard on working out and shaping up and so to me, those aren't worth the calories. But Raelynn likes them. MIL had brought them for her.

And in grand MIL tradition, she had opened the package and neglected to close it properly. My husband does the same damn thing. I see where he gets it from. I grabbed the package to close it up better and that's when I noticed there was English on the front. Once I read it, I realized, "Hey, that's not English. It's ENGRISH." 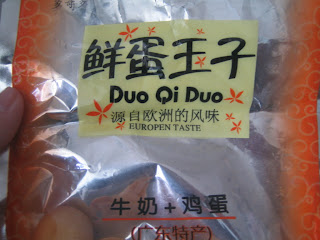 They were aiming for European taste, but instead, they got "Europen taste." Europen? Is that a pen for one Euro? It should be. Maybe it's a pen that has traveled all over Europe. Or most likely, some inept cretin was in charge of the packaging and didn't know European from Europen. The dumbasses are taking over indeed.