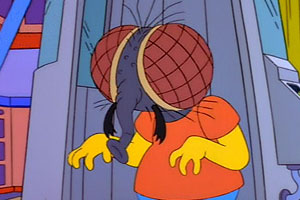 I couldn't resist using this image from one of my favorite Simpsons Halloween Episodes.


If this sounds like the title to some stupid movie, you're only half right. It's not a movie but it is plain old stupidity brought into my house by none other than MIL. Of course, you're not surprised. She was the reason we had a fly problem 2 summers ago.

Today, when I came home for work, 5 - yes FIVE - large flies were flying in erratic circles around my bedroom. There's nothing to draw them in there though I suspect because the sun beams through those windows in the afternoon, they thought they were trying to get out. I immediately lunged for the bug spray under the kitchen sink, while MIL looks on in utter confusion. I tell her there are flies in the house and dart back into the bedroom.

Soon, I've sprayed them all dead. One of them was as hard to kill as Stripe, the most evil of the Gremlins. He must have been the fly leader. 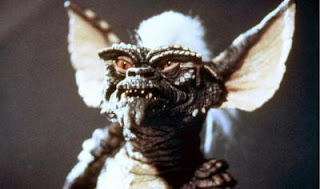 After bringing the flies to their doom, I put the spray back under the kitchen sink and I ask MIL why there were flies in my house. She stares at me like I've asked her to compute nuclear physics off the top of her head. And she just stares. I'm sorry but how do you not notice you've let 5 flies into someone's house? Would you leave them there or would you get rid of them? If you're MIL, you let them have a fucking party. Why not put out some fruit for those little fuckers to munch on while you're at it? That hideous, stupid zombie. And let's even play devil's advocate here. Let's say the old gal didn't realize there were FIVE FUCKING LARGE FLIES zooming about our small apartment. Why wouldn't she say anything at all? I bet she summoned them to make me crazy as payback for the "mysterious" disappearance of her stained mini-troll dress. I should have sprayed her instead.
Posted by JQ at 2:29 AM

Email ThisBlogThis!Share to TwitterShare to FacebookShare to Pinterest
Labels: I Hate Bugs, MIL Problems, Stupid People, Thanks For Nothing