Breaking All The Rules

As Christmas quickly approaches, Jeremy and I took the kids and headed to the mall this weekend. In America, I'd just say fuck it and order everything online because there is no way in hell I will set foot in a mall there after Thanksgiving all the way through around January 10th. But here, it's quite different at this time of year. Sure, there's Christmas crap everywhere. And Christmas music, much to my joy (and before you think I'm insane for that, please come join me for Chinese New Year and you will understand what annoying music being piped through a sound system truly is). But Christmas shoppers? Not really.

On a Sunday at around lunch time, the Marina City mall, which is usually busy even when it is not the holiday season, was very placid. I was thrilled. I'd wanted to go there because there's an H&M. I had no idea what to get Jeremy for Christmas except this shirt I'd seen him looking at the last time we were there a few weeks ago.

Can I just tell you how much I love H&M? It's true. I can always find something I like in there. Always. This time, as soon as we walked in, a sweater called to me. It did. It was so me, it wasn't even funny. I rush up to it and adore it some more. It's black and has a fluffy pink heart in the center. Oh I have to have it. HAVE TO. It's 149 rmb which isn't too bad. And they have it in my size. Oh please fit me. Please look nice on me. You have to! Jeremy loves it. He wants me to try it on. On the way to the fitting room, I find another gem. A Tiffany-blue sweatshirt with a horse silhouette on it. It's so soft and comfy. I dash off with one of those too. I hand the baby to Jeremy and try on clothes faster than Superman. Lucky for me, both items look awesome so I've just gained 2 very fab Christmas gifts. Sure, there's no surprise but at least my husband knows they fit and they are liked.

Now for him. We head to the men's section. There's a huge sale going on but the shirt he liked is not where it was before. I finally find it and discover it's 249 rmb. Jeremy doesn't want me to spend that kind of money on him for a shirt. But it's Christmas, I'd protested. I want him to have something he really likes. So he says he'll look at the sale items instead. And for about 300 rmb, we found him 2 dashing sweaters.

We were high on a shopping buzz. And to top it off, Raelynn had been such a good girl. We decided to buy her an ice cream from McDonald's to reward her. After that, as we were walking around, we saw some weird displays. I thought they were dinosaurs and wanted a closer look. 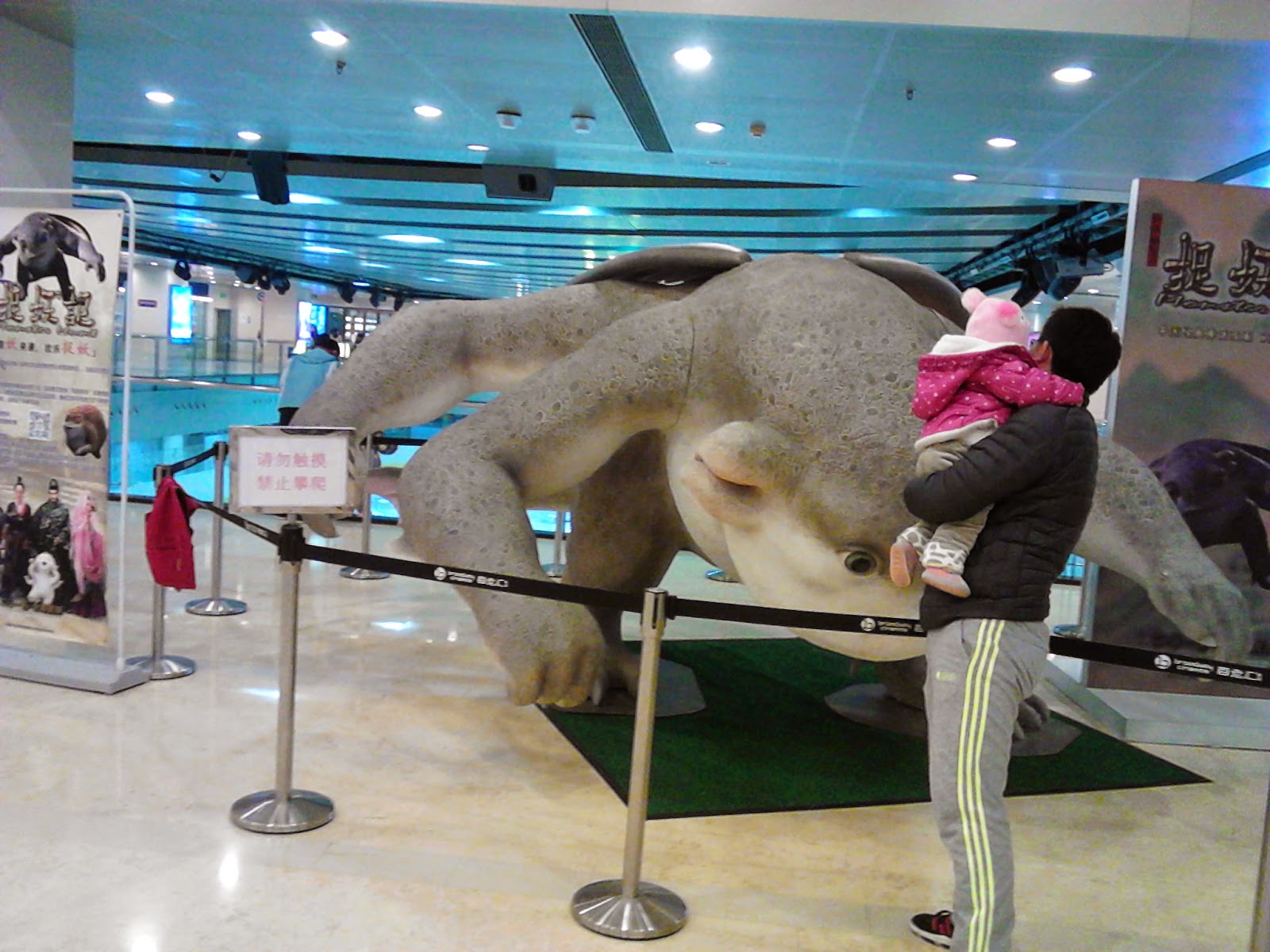 Well, it's not a dinosaur but it is some sort of life-size creature from some movie. Which movie, I've no clue but there's some poster to the left that seems to be advertising it. Unfortunately, it's in Chinese. And my Chinese just happens to suck.

But you know what? Despite my sub-par Chinese skills, I will tell you this: I understand the sign posted with the creature there. That coupled with the roping tells me that you do not want me to get close to this display or touch it. So I don't. But the Chinese people around us? Oh, China... 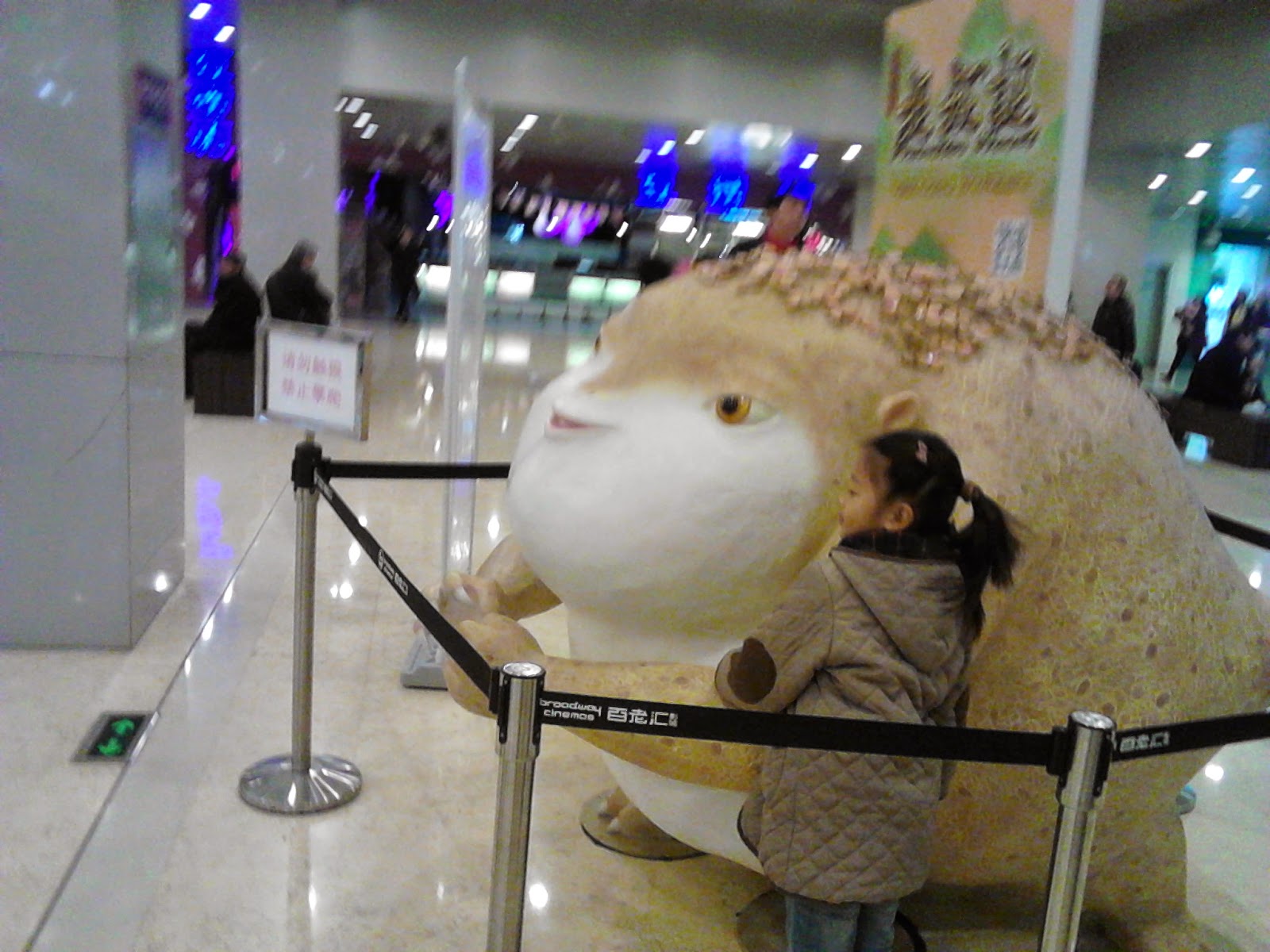 This little girl's mom told her to get inside with the creature. Great parenting. Let's ignore the sign that's posted which, Jeremy says, essentially translates to "do not touch or climb." Why is it that I suck at Chinese but yet I totally understand and obey the sign that I can't really read? Oh, and the man with the baby in the first picture? Just before Jeremy snapped that photo, he was putting his baby on top of the creature. We just didn't snap a photo quickly enough. 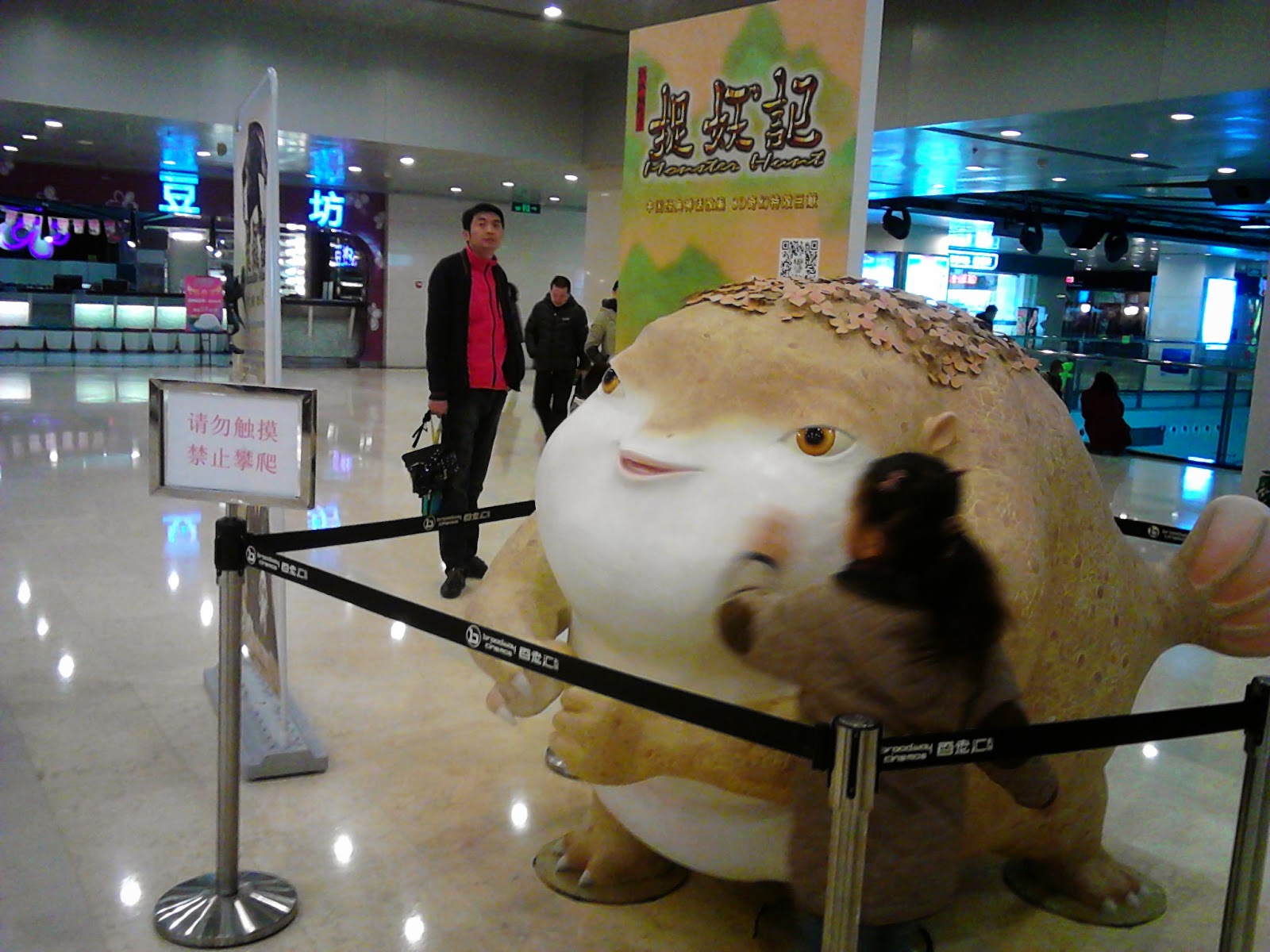 Yes, go ahead. Touch the display even though it says not to. Get inside the roping even though it is obvious you are not wanted within its' confines. Brilliant.
Posted by JQ at 5:26 AM