Today, we went to the Wanda Plaza mall after Raelynn's play group. I'd been talking with some of the moms in the group about maternity wear. Many of them had stuff they'd brought with them from the US (or had visiting relatives bring). I myself have some things that are still in good condition from when I was pregnant with Raelynn, but I bought those things when we still lived in Seoul. I'm still able to fit into regular pants but they are getting more and more snug. It's only a matter of time before I have to say goodbye to real waistlines and don maternity wear full-time.

One of my guy friends is married to a lovely Chinese woman who happened to be there today. They have 2 kids, so I asked her where she shopped when she was pregnant. She told us the name of a store called October Baby. She said they're in every major mall here, even the Wanda Plaza mall, which is closest to us. So Jeremy and I decided we'd go there for lunch and then look at maternity clothes for me.

We ate a quick lunch and then we went to find the maternity store our friend had told us about. We decided that, instead of wandering around the mall with a toddler (who actually happened to be very good today, thankfully), we should ask about it at the information station. Now, just like in the US, there are information stations in the malls and the airports and such. And they are universally adorned with an "i" to indicate information can be found there. So we head toward it. 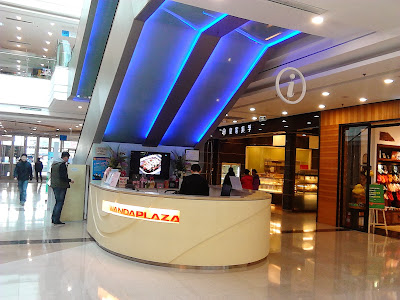 There's one lone guy behind the counter. Jeremy asks him if there's a maternity store called October Baby. The guy says he doesn't think so, but he's not sure. So Jeremy asks him if he could tell us where ANY maternity stores are in this mall and the guy says he has no idea. He tells us he only has a small list of stores in the mall, not a full list. One of them is the Vans Department Store (not affiliated with the brand of shoes, incidentally). He says maybe there might be maternity clothes in there. Ok, could you call them and ask them if they carry maternity clothes, my husband asks. And then the sorry excuse for an information guy points at some phone numbers on display and says WE can call them. Then my husband asks him where the closest entrance to the department store is from where we are and the information guy says, "I don't know, but you can try walking that way. I think it's over there." Yes. This really happened. There are many people like this in their jobs here. Utterly useless. How the hell can you work in an information booth and have no fucking information for anyone? I have never before seen anything like it. It's even worse than the Carrefour on Shandong Road where you ask employees what aisle something is in and before you can even finish asking them they curtly snap, "Meiyou!" which means "don't have." Lovely. It's why we never go to that location anymore. It's the worst Carrefour in the city. In case it's not obvious from this tale (or many of my others) customer service doesn't exist in this country.

Would you like to see the lazy mis(ter)information guy? Sure you would! Photo credits for this post go to my amazing husband. Thank you Jeremy! 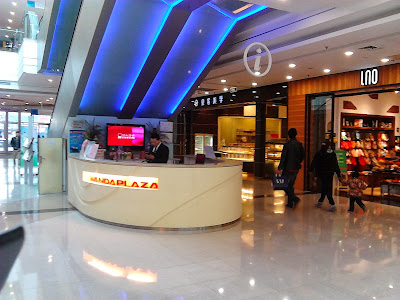 Do you see this? He is just playing on his phone. What a waste of a salary on this guy. I guess if you want a cushy job in China, work in an information kiosk. 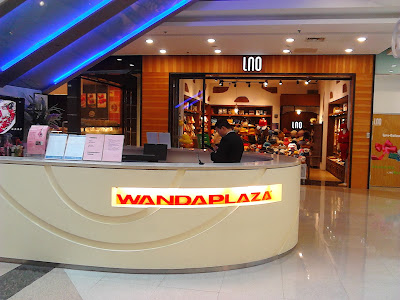 I love my husband. He blatantly walked up close for this shot. And this guy is too oblivious to notice. Congratulations, useless tool! You're being made fun of in my blog.

So, you might be wondering if we found maternity wear or not. We sure did. But in the Vans Department Store, it was insanely priced. I found a ton of pants I liked priced from 346 rmb to 549 rmb. Yeah, I'm not paying those prices. I showed Jeremy every pair I liked and we checked the sizes. We ordered them off TaoBao for much cheaper. Here's hoping our measurements are correct and the material isn't shitty. It's got to be better than the crap we found at the market out in Taidong (the best area of town to shop). There, some buttfuck was smoking inside the store and my child had thrown an epic tantrum but I still got a chance to leaf through a few things. And all of them were horrid. They looked like they were made for midgets or small children (child bride, anyone?) and they all were decorated with stupid babyish crap on them, like bears or bunnies. I'm 37. I'm having a baby, I'm NOT a baby! Yeesh! I wouldn't even put my kid in something like that. At least the stuff in the department store gave me hope that I can find maternity clothes that won't make me look like a giant baby.
Posted by JQ at 5:07 AM