I have been meaning to write about the following since late March. But every time I sit down to write in the ol' blog, something else has come up and it has effectively slipped through the cracks, day after day, week after week.

At the beginning of this semester (which is a funny thing to type right now considering the first semester is halfway over), we were all in charge of pitching in to decorate certain parts of the kindergarten. The other English teacher, Jon, and I were responsible for decorating some boards in the hallway. The Korean teachers had some as well. And the Chinese teachers were given the task of making the bathroom a cheery place.

First, the Chinese teachers had made signs for the sinks. They came to Jon and me with a paper featuring a design of a water drop and a picture of a faucet. They wanted to know what they should put in English and we told them "Don't waste water." That was easy enough. 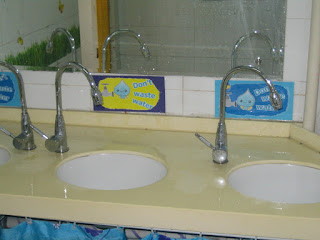 But then, for whatever reason, they created these signs to go in the bathroom stalls. Why they wouldn't consult us first and ask us if it made any sense was beyond me, especially since they asked us about the signs for the sink, but in any event, here you go: 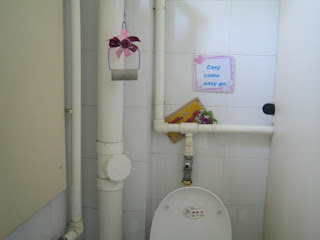 When I told my husband about this, he cracked up. He totally understood what the Chinese teachers were trying to convey from Chinese into English. Jeremy says the Chinese thing to say is "lai ye cong cong qu ye chong chong." And according to Jeremy, it wouldn't come out as "easy come, easy go," but rather "don't forget to flush."

They made some other signs more recently and despite spelling out the words for the Chinese teachers, they spelled "toilet" as "toilrt." And wrote "ten" instead of "the." And "handas" instead of "hands." I have no photos of these but I'll go snap some on Monday and update this post. Stay tuned!
Posted by JQ at 7:11 AM