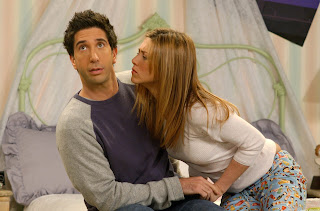 On Saturday afternoon, as my husband channel-surfed through our satellite channels, something caught my eye. It was Phoebe and Monica from Friends. "Stop!" I shout! "Please go back! Please please PLEASE!" I beg him. He obliges and I squeal happily. I haven't seen Friends in ages and I am beyond delighted to get to watch it again. Jeremy tells me he's seen some of the episodes before and liked them. Raelynn busies herself at our feet, playing with blocks while we zone out on the TV.

It's the episode where Ross and Rachel are expecting the baby any day now but still, no baby. They go to the doctor together and the doctor tells them about the things they could try that might cause Rachel to go into labor, like eating spicy food, castor oil or *bleep*. Actually, there wasn't even a bleep. It was just silence as the doctor mouthed the so-called offensive word on TV. The word that went missing? SEX.

Yes, they removed the word "sex" from ancient Friends re-runs. I couldn't even believe it. It happened again - several times actually - as Rachel and Ross sat at the Central Perk, talking to Monica about everything. When Monica said the word "sex," she was silenced too!

The channel we were watching these re-runs on is ETC, which is run out of the Philippines of all places! I'm stunned that they would edit out such a normal word. What's wrong with saying "sex" anyway? What's even more unusual is that, later in this episode, Ross and Rachel are having dinner at his apartment. They're eating enchiladas and spicy peppers and she's making a plea for him to just give it to her good because they have tried everything and she just wants the baby to come out. He's been worried that it will open up a whole can of worms. He says he doesn't want to make love to her. "Make love? Are you a girl?" Rachel asks him. And those two utterances of "make love" didn't get cut. Neither did the scene that followed where Ross finally just jumps on her and starts making out with her, incidentally.

How is saying "sex" so much worse than "make love?" I don't understand the rationale of deleting such a normal word. It's not like "fuck" for example (which offends me not, of course). It's more like "coffee" or "chocolate." Good grief, Asia! This side of the world is so prude and closed up about sex. Astonishingly, it is the most populated part of the world. I'm surprised people here even know that sex exists at all when the spoken word is edited out of TV shows. It's crazy. Then again, I've been told that back home in the states, they've taken sex education out of the schools. That might just be crazier than the censorship of oldie but goodie episodes of Friends. Maybe it's a tie.
Posted by JQ at 6:39 AM

Email ThisBlogThis!Share to TwitterShare to FacebookShare to Pinterest
Labels: Asian Censorship, Society Down The Tubes, WTF