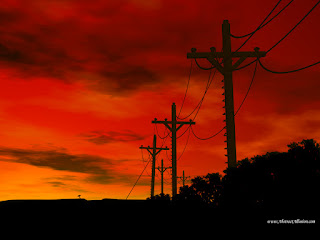 If you're a U2 fan, then perhaps the title of this post causes you to smile and sing:
Boy, stupid boy
Don't sit at the table
Until you're able to
Toy, broken toy

Thanks to the "boy, stupid boy" part, this song was one of my favorites as a little girl and this will probably always be one of my favorite U2 songs ever (take a listen here). But this post is not about U2. It's about the actual electric company. And maybe only marginally involves Bono and the band for I did revert to playing this song over and over inside my head while my husband blabbered on and on about the electric company. Allow me to explain...

Here, you get your electric bill every 2 months. So your charges are for 2 months. My husband had previously yammered on and on about how if you exceed a certain amount of electric usage per month, the government charges you something extra or something something. Oh go ahead and make fun of me for not knowing. It was THE most boring conversation you could ever hope to have with someone, even if it's someone you love as dearly as I do my husband. Anyway, our charges for the last 2 months amount to a little over 700 yuan. To anyone not living in China, this means jack shit. Let me break that down for you all. The US dollar is worth about 1 to every 6 yuan (roughly speaking) so would mean this bill is worth a little over $100 US. For 2 months. In the summer. Yeah. So I'm fine with it of course.

Jeremy, who makes it a hobby of complaining about how expensive EVERYTHING is, tells me about this electric bill and in the same breath says that his parents only had a 60 yuan bill. For 2 months. In the summer.

How is this possible, you ask? Well, for starters, my in-laws NEVER use hot water. They do not have hot water in their sinks, meaning their dishes are always germy since they wash them with cold water (another reason to avoid visiting their home, as if I needed one). They do not have a water heater. Their shower is solar powered. We have a solar powered shower AND one powered by a water heater. The solar powered one is just fine on a sunny summer day. But in winter you are S.O.L. if you want a hot shower. I think that is why most geriatric Chinese people (like my in-laws for example) skip showering during this time. As if they weren't stinky enough.

Next up: laundry. I do laundry every 2 to 3 days, depending on if there have been any poop explosions from the baby or not. Today, I did 2 loads - one for our clothing and the other for our floor mats and kitchen towels because everything was filthy, especially the floor mat in front of the bathroom, thanks to MIL who wipes her fugly-ass granny shoes on it when she comes and goes despite being told many times by my husband not to do that (and to instead, wipe her feet on the mat IN FRONT OF THE FRONT DOOR). I sincerely doubt my in-laws do so much laundry as they wear the same few things every day. And they don't have a poopy-pants baby in their home who has lots of little things for me to wash.

And we've got the big one now: air conditioning. We're paying now for 2 months of electric usage. Since it was just summer, we're paying for all the electricity we consumed during that time. We have 2 wall-mounted units. One is in our bedroom and the other is in Raelynn's room. And if you have no idea how I feel about being hot in the summer and/or enduring someplace that lacks A/C, please click here. So given that we ran the air a lot, especially in August, it's no wonder our bill was in the 700s.With as much as we used the A/C, I'd say this 700 yuan is a bargain. But my in-laws can't believe it. As you may have guessed, the hideous troll and her husband do not have an air conditioner. Of course they don't! They don't even have an actual toilet so why would you expect them to have air conditioning?!? They might as well sell their house and go live in a tent somewhere. Somewhere far away, preferably.

Let's not forget we've got a big and awesome refrigerator, which uses up lots of energy too. Maybe THAT is why MIL unplugged it! I can assure you that even though my in-laws have a refrigerator (an old, small one) that they store food outside on the window ledge. This is such an older Chinese person thing. I may have mentioned this in one of my posts a while back, while I was still pregnant with Raelynn but I am too tired and lazy to go looking for it now. MIL used to store some food items outside on our window ledge too. Which did bother me though because it wasn't in a place that got direct sunlight and it was beyond frigidly cold outside, I decided to let it go. That is until one day while in our kitchen, I watched with a mixture of amusement and disgust as a bird swooped in and began chowing down on the offerings. From then on, MIL's outside kitchen was closed. At our house at least. You can bet on it that she keeps food outside on her window ledge. And she'll probably still eat it, even if a bird munches on it or shits on it too.

Then there are smaller things, like the filter for the fish tank. Or the satellite dish. Or our 2 laptops. Or the oven, which I tend to favor when cooking since it's healthier than frying everything. My in-laws don't have any of those things. I don't know what they do when they are at their house. It is very boring there. They have Chinese cable TV, but as I've said before, even Jeremy states quite plainly that Chinese TV is very boring. But not to them. MIL and FIL just love those shitty singing shows. Not like an American Idol type of thing. Like these dreadful dinner and a show type things that  you'd see on a cruise to hell. In fact, I do have pictures of that in this post (just scroll to the end for those). They don't have any books or magazines over at their house that I have ever seen at least. So, if they just sit and stare at the walls, and perhaps occasionally, the TV, and then they don't bathe and then go to bed at 9pm, well, then it is easy to see why their electric bill is only 60 yuan for 2 months.

But wait! Let's not forget the troll is here Monday through Friday to watch Raelynn while we're working. Sometimes FIL comes too (I can always tell because Raelynn's room is even messier as he lets her destroy papers and magazines and doesn't dare to clean it up). So here they are using our electric, cooking on our stove, using our lights, watching our Chinese cable (we have that as a back up for when the satellite isn't coming in, or when these 2 morons come over) and unplugging our refrigerator and causing our kitchen sink to leak (I swear, I am writing about that one next...hopefully tomorrow if I have a moment). So yeah, that clinches it for me. Next time Jeremy opens his mouth to complain about this one, I'll remind him who is here in our house all day long. Of course, with how much his mom talks, you could easily say her mouth has used up all the power. If only there was a way to turn that noise off. Maybe Jeremy could ask the electric company!
Posted by JQ at 7:56 AM