Sucks To Be Sick 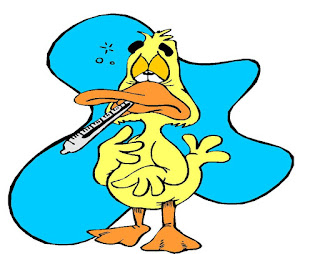 How can you tell if I'm really sick? Well, chances are, if I willingly let MIL cook for me, I am rather ill. And that's just what happened this week. I had to go home sick on Wednesday. My throat was burning and I had THE worst headache ever. If you're a teacher (especially to small children), you KNOW that you've got to go home and rest.

Jeremy was home between some meetings and had already told his parents I was on my way home. His father had run to the pharmacy to get me some medicine for my throat. When my husband learned of my piercing headache, he ran out to get medicine for that. MIL was actually not so bad, I must admit. I fed Raelynn and then she took over, keeping Raelynn busy with play and giving her naps so I could sleep.

When I awoke, MIL asked me if I'd like for her to cook dinner. At first, I said no. But I still felt like total ass and the thought of standing over the stove trying to cook dinner for my husband and me further exhausted me. I also had visions of Jeremy being unhappy cooking dinner after a long day of work so I changed my mind and told her in Chinese to go ahead and cook. It wasn't a culinary masterpiece of course, but I wasn't up for eating much anyway. I picked the potatoes out of the dish and ate them with my rice. Before she left, she even cleaned up after herself. Nice job, MIL!

This morning I woke up and still felt sick. I reluctantly called in. I couldn't see myself standing there, repeating the same things over and over with my throat hurting as it did. I knew I needed to rest up and kick this horrible illness out of me. But the thought of being trapped in my house with my in-laws made me want to jump out the window. Both MIL and FIL showed up to take care of me. I wanted to cry. It's not that I don't appreciate the help. I do. Even if it comes in the form of two slow-witted people who leave half-eaten cucumbers sitting about (no fucking joke). But to be sick in bed in our small house with both of them lumbering about just sucks.

I have to say though that they left me alone fairly well. I was given my daughter to feed her breastmilk. They were quiet while I rested. And MIL actually made a lunch that tasted more than good. It was great! It was just like wonton soup we'd be served in the states, only BETTER. I briefly questioned whether or not I was dreaming as you no doubt remember some of the things she's cooked, right? Scroll to the bottom of that post for the photos. Just looking back at that gives me nightmares! Blech!

She also made some herbal remedy for my throat that was horrible but actually worked. I took a nap soon after and slept deeply. I feel loads better! And now that I'm awake, she's in there cooking dinner that, dare I say, actually smells rather tasty? That's it. Perhaps the fever went to my head. Though hopefully, perhaps she has just gotten better at cooking and perhaps I have finally learned how to be kind to my in-laws. Don't worry...they'll still do plenty for me to make fun of. Of that I am sure!!!
Posted by JQ at 3:09 AM