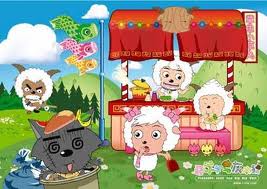 Here in China, this sheep cartoon is quite popular. It's called 喜羊羊与灰太狼 which says Xǐ Yáng Yáng Yǔ Huī Tài Láng. That translates to Happy Lamb and Grey Wolf, or officially on merchandise, Pleasant Goat and Big Big Wolf. You see this shit everywhere. And I do mean everywhere.

So naturally, I was not at all surprised when my brother and his girlfriend, Kimmy, were visiting us a couple weeks ago, we spotted someone dressed up as a budget-version of this as we walked through the famed May 4th Square. Phillip and I immediately began joking with each other, reverting to our old childhood game of this-is-you-that's-you. As we got closer, the sheep character approached us and got all huggy and mugged it up for pictures. Kimmy, being an outstanding photographer, snapped a few of them and then we waved goodbye. Only budget-sheep-costumed person wasn't budging. She was raising her voice angrily in Chinese. Not missing a beat, my husband suddenly feigns that he isn't Chinese and just starts speaking to her in English. She's not thrilled about this and finally, Lane begins yelling back at her in Chinese. Meanwhile, my brother is on high alert as the other character had bumped him so he's checking his pockets to make sure all his belongings are still intact. I'm holding the baby but I'm wanting to seriously push this crazy lady down and kick her ribs in. The woman in the sheep costume was now demanding we pay her 10 yuan a person per picture. Kimmy had already deleted them from her camera and had even shown the woman as she did so. Two men are also standing there this whole time and at first, we thought they might be in on it but it turns out the budget beggars had weaseled them too. Lane told her he'd only give her 10 yuan total to shut her up. I glare at the two men and yell, "Is everyone in this fucking country a fucking crook?" Not that America is without its' faults but there are some really lecherous people here. Lane throws 10 yuan to the ground, a huge sign of disrespect in his culture, and we leave.

My brother and I then began discussing how annoying it is to encounter people like this who have no real job and try to earn money by cheating people out of theirs. Just like those countless "cabbies" at the airports who offer to take you to your hotel or wherever you're going for an astronomical fee. They mob you in some places as you're busy carting your luggage around. It's tempting, especially being in a different country. But don't fall for it. Keep walking and outside, perhaps with a little guidance from a legitimate staff member at the airport, you will find a taxi stand where you wait your turn and you get a real taxi, one that won't rip you off.

Phillip also told me about a guy on Hollywood Boulevard (which, being that we grew up in South Florida, I immediately thought of the Hollywood Boulevard there, but he was talking about California) who dresses up as Superman, will take photos with you and then demand to be paid for taking a photo with you or will chase you down the street if you don't. Why can't these people simply state up front that they charge a fee for their services? Perhaps they're afraid no one would take a picture with them. But if they were honest, maybe they'd find more people would give them money out of sympathy. Hell, if they were honest, they wouldn't be standing out in the cold trying to con everyone that walks by.

Despite the encounter with these cartoon crooks, our visit with Phillip and Kimmy was wonderful. We were so happy to have them here. Our only complaint was that time went far too quickly and before we knew it, they were both back in Singapore. It was great to watch them bond with Raelynn and to share Chinese New Year with them. Now I'll end this post on a happy note, with some photos of Phillip and Raelynn, who FINALLY stopped crying when she was around him. Insert obvious joke about my brother: perhaps she finally got used to how much he smells. Bwahahaha! Kimmy (who does not smell) loves taking photos but seldom likes being the subject of them, despite how stunning she is. I know she reads my blog regularly (thank you!) so if you don't mind me using a photo of you too, just let me know (you can even pick which one) and I will update this post to include it. 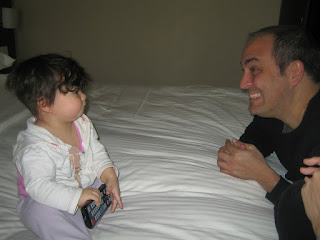 Raelynn loved playing with the remote control in her Uncle Phillip's hotel room. 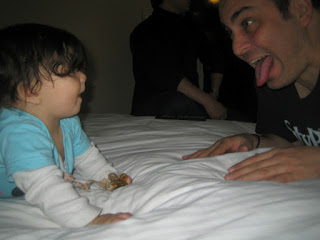 Phillip making one of his typically goofy faces at his niece who now finds him funny instead of scary.
Posted by JQ at 11:36 PM