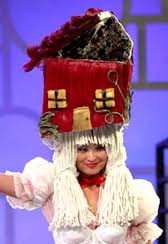 This evening, Lane and I sat down to dinner with the TV on. In typical male behavior observed all across the globe, my husband clutched the remote control with his death grip while clicking and cruising through the channels for something to watch. He usually sticks it on soccer or changes it from the one thing I've found that I want to watch but this time, when he came upon one channel, he froze. And so did I. Our mouths gaping, we stared in amazement at the show on television.

It was called Hair Battle Spectacular. Has anyone seen this thing? Is this something everyone back home in the states is fully aware of? If you're just cluing into this like me, you can read the full description at the Oxygen website here. Basically, thanks to the annoying pop cultural icons of Nicki Minaj and Lady Gaga who constantly try to gag us with their bizarre styling, this show pits stylist against stylist in an attempt to outdo each other with the most insane hairstyle. It's so demented. It's so horrible. It's so riveting that neither of us chewed for a good 10 minutes. We just sat there staring, mouths gaping open. It's sheer lunacy, pardon the pun.

Finally, I broke the silence. "I am so ashamed for my country right now," I tell Lane. And truly, I am. Not that all programming was intellectually stimulating before I left the country. I'll admit I do love a good competition show. I adore Hell's Kitchen. Lane loves Masterchef. Cake Boss has us both glued to the tube. But Hair Battle Spectacular is an all-time low. It is just beyond terrible. Yet we couldn't turn away. The episode we saw had the stylists designing wedding cakes out of hair that their models would wear upon their head. Two would face off at a time and the judges would make unoriginally bitchy comments to the contestants about their designs. Here is a shot of two contestants facing off with their models. This is not from the one we viewed this evening. 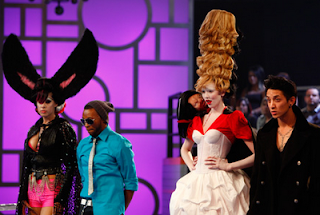 Like holy what the fuck Batman, right? I mean, wow. Just...wow. It's epically over-the-top, bats in the belfry, fries short of a Happy Meal infuckingsane. Have they all just run out of ideas for television shows over there? Was this made as a joke? Has everyone gone crazy since I left? I'm not quite sure what to make of this. What I do know is that I am seriously embarrassed to say I come from America after seeing this crap. And I thought I was embarrassed when Jersey Shore and those Kardashians popped up. This is the icing on the cake! Then again, the Canadians came up with curling so I guess that is decidedly MUCH worse.
Posted by JQ at 12:53 AM

Email ThisBlogThis!Share to TwitterShare to FacebookShare to Pinterest
Labels: Meanwhile Back Home, WTF