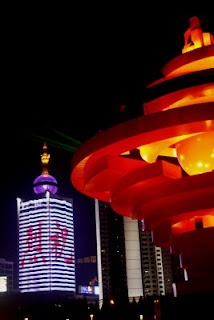 Night view of May 4th Square in Qingdao.

Silly me. All this time, I thought Qingdao was famous for its beer (which is packaged as "Tsingtao" for all the rest of you out there). It's darned good beer too, so imagine my surprise when my husband "Lane" (his new English name he's decided to use now, in case you didn't read my last post) tells me, proudly, that his hometown of Qingdao is famous throughout China for the use of plastic bags. Allow me to clarify. 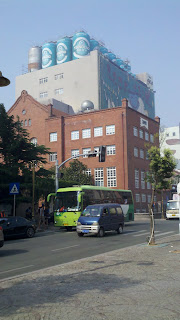 The Qingdao (Tsingtao) Beer Museum, which is sure to be loads of fun, especially with my family. After their visit, I'll blog in extensive detail about our adventures there.

Sure, it's still famous for tasty beer. And many people come to see the beer museum, which is close to our home. I've actually yet to see it and am quite excited to do so. When I first arrived in Qingdao, I was a bit too pregnant for such an adventure. Now, we're just waiting for my family to come visit in August to go with them. Also, for you Olympics aficionados, when the 2008 Olympics were held in Beijing, they made use of nearby Qingdao for the sailing activities. Plus, in all the advertisements, Qingdao is touted as "The Sailing City." But apparently, the locals are quite pleased by this distinction of being known for using plastic bags over all else. "Lane" pointed this out to me when I was perplexed by his arrival home with 2 plastic bags full of beer. His parents were over for lunch and perhaps in an attempt to make them more fun or make me less annoyed by their presence (whichever it was, it worked!), he'd gone out to purchase some beer. You'd think he'd come back with a 12-pack or something like that, right? Oh, not in Qingdao! Oh no siree! I was absolutely mesmerized. Imagine 2 clear, plastic bags - the kind you'd get at the supermarket - filled with beer. Not Ziploc bags, but the kind you'd have your groceries bagged in. Yes, those.

Since then, I've noticed this EVERYWHERE in this city. If we get take out or if we have any leftovers we want to take home after dining out, they put the food IN PLASTIC BAGS. Even soup! No containers, just plastic bags. That must be why all these tourists are here now...for the bags! Aha! It all makes sense now. No wonder the buses are even more crowded than usual. Everyone is flocking to Qingdao to enjoy beer and Chinese food out of plastic bags. Yes! Come for the beaches. Stay for the bags! It should TOTALLY be their new tagline.

Several different beach shots in Qingdao, which actually translates to "Green Island" though it isn't actually an island. It's a peninsula which still makes for plenty of beach space here. And though I may complain about living here sometimes, I have to say a quick trip to the beach will always put a smile on my face. 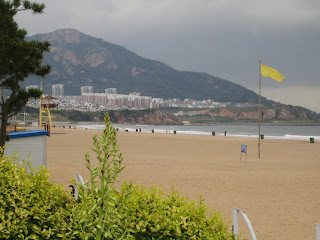 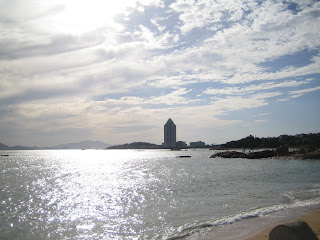 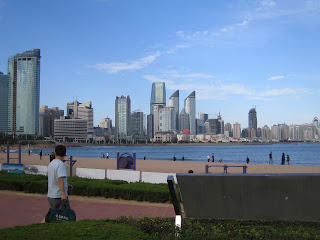 Perhaps the real mystery is why they're so proud of such a thing. I mean, there's plenty of really cool things here worth bragging about. Beautiful beaches. Scenic mountains. Outstanding seafood. The Tsingtao Beer Museum. Underwater World. May 4th Square. Polar Ocean World. Qingdao Huadong Winery. The Qingdao TV Tower. And let's not forget the epic Qingdao International Beer Festival which happens every August (and hence, why my parents decided to plan their visit next month to coincide with the festival). But plastic bags? Where are those environmentalists when you need them anyway? They'd have a field day with these people and their plastic baggery for sure. On the other hand, I've never been to a place that lets you do take out with draft beer, so I guess that's an advantage. It's certainly an odd thing to gloat about though. That's like me telling people I come from Miami and bragging about the constant live gunfire that takes place instead of boasting about the Everglades or Florida oranges. Then again, with all the bad publicity Florida gets these days, maybe I shouldn't even mention I'm from there at all. Oh hell...you can take the girl out of Florida but you can't take the Florida out of the girl. If anyone needs me, I'll be drinking my bag o'beer.


UPDATE!
My lazy-ass FINALLY got a picture of the beer in the bag: 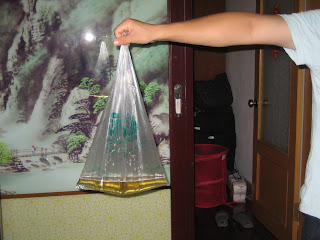 Here is a recent bag of beer we were consuming, as held out by my husband who is now contemplating arm modeling. Of course, I remembered to photograph when we were almost finished, but you get the idea. Imagine that thing full! Pouring takes some skill though.

Email ThisBlogThis!Share to TwitterShare to FacebookShare to Pinterest
Labels: Beer Me, Qingdao, WTF