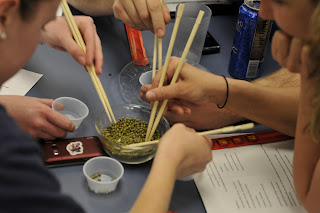 A few days ago when my husband and I went out without our beloved angel baby (the same day we had the pleasure of being driven around by Qingdao's best-dressed bus driver), we happened upon a partially-indoor shopping area. It was really hot outside so we'd stopped in a convenience store for some ice cream before heading home to rescue Raelynn from my MIL. We were eating it inside the store when we discovered a very cool breeze coming from a partially opened door in the back. Through that door, we found something spectacular. My husband, who was born and raised in Qingdao, didn't have any idea this was there. It was quite perfect finding it now since we're starting to plan activities for when my family comes to visit in August. It's a shopping and dining area that's not completely indoors or outdoors but it's painted to look like a charming European-esque street with starry skies. We saw something similar in Shanghai at the Renmin Square subway station, which I've included to give you a rough idea of what we're talking about. 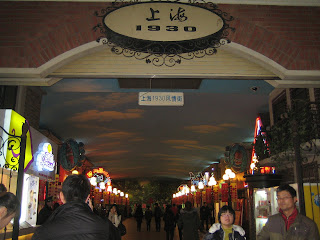 Nice, huh? Anyway, we poked around the little shops and carts with the kind of trinkets tourists would buy. One cart was very different though. It had a bunch of crappy, cracked-out looking toys. I should have known what we were in for when the woman running the cart was mean to a bunch of children who were just trying to look at the toy selection. I wouldn't have paid any mind to this cart but there was - get ready for it - a plastic double cheeseburger-shaped truck with a very scary Ronald McDonald driving it. Seriously. This was the day I'd forgotten my camera so I point excitedly and ask my husband (who is also rather amused by this item) to get a picture with his phone. But the woman was a total bitch! She realizes we just want a photo of it and grabs it like a football and covers it. Um, yeah. Thanks you cow. Good luck getting any sales with your attitude! My husband says something not-so-nice to her and off we go. We pass a large fountain and as we enjoy the cooling mist from the water, we notice another long stretch of this lovely shopping area, filled with more little shops and restaurants.

We decide to check out one of the restaurants as we walk by. There's a menu out front and we're curious to see if this might be a good place to eat with my family during their visit. My husband might have been oblivious to this area ever existing, but apparently tourists are not because the menu of this establishment (and others including a sweet looking dessert place) was in Chinese and English. And that's where the real delight occurred. Because some of these items truly got lost in translation.

So here are a few of our favorites that we snapped shots of. An extra big thanks to my wonderful husband for his photography on this one. I should also mention that when he gave them to me on his jump drive, he had put them in a folder that he named "Stupid Menu." My husband LOVES the word "stupid." I would venture to say that it's his favorite English word. By far! 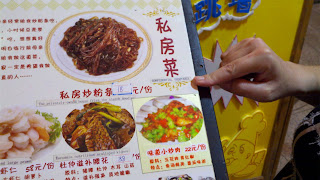 You'll notice my finger off to the right, pointing at "Confidential Vegetable."This, incidentally, was what prompted me to cackle with glee and ask Xiaolong to get on camera in the first place. They're not telling you whatever it is. Maybe it's not even a vegetable. Hey, it's a communist country, folks. The photo (which is below the title) isn't any more telling than the name. It's a secret! Shhh! Also in the same photo, we have pure confusion with "The privately owned starch fries the house noodles." So, the starch, which is owned privately, will fry the house noodles? Or are the starch fries a thing? And of course, we have "Eucommia nutritious scalloped kidney." I probably don't need to tell you that "eucommia" is not a word. To their credit, they probably used a translating program to interpret their menu. English is my husband's third language and while he speaks it very well, he doesn't have the words for everything. When that happens, he'll use the translator on his phone to explain his meaning. Unfortunately, much of the time, it will give some random phrase that doesn't make a lick of sense. As a matter of fact, I think I've seen some of those phrases on other menus in town. Anyway, if the "eucommia" didn't frighten me away, "kidney" did. 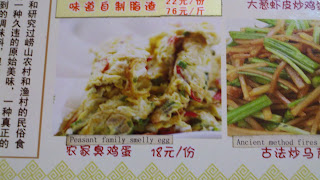 In the next photo, we have "Peasant Family Smelly Egg." It speaks for itself (and probably stinks for itself) doesn't it? Blech. 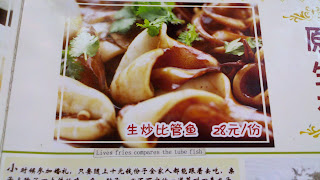 And "Live fries compares the tube fish." What do they compare the tube fish to? And what, pray tell, IS a tube fish? Maybe I'm just not on the up-and-up with the whole seafood movement, given my disdain for sea life on pizzas. This one's just as perplexing as the starch fries from the first photo. Maybe live fries are related to starch fries somehow. Or, Lord help me, maybe they meant "tube snake?" Eep.
Posted by JQ at 7:00 AM