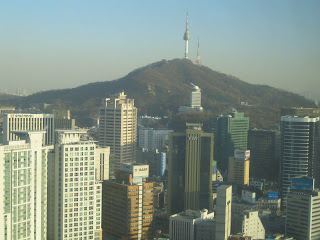 A spectacular view of Seoul from high up, featuring the iconic Namsan Tower in the background.

My love for Seoul knows no bounds. An incredible metropolis with a side of silly thrown in, I'd fallen hard for it in December of 2009. It's where I met my wonderful husband, Xiaolong. And it's where I up and moved to teach English in February of 2010. But when we got pregnant and then got married in September of 2011, we had to make plans to move due to my husband's visa complications. In November of 2011, we moved all our things over to Qingdao, China where we now reside.


Qingdao isn't a bad city. It's just that it takes a lot of getting used to. I had very little in the way of culture shock when I lived in Korea. But here, it's an entirely different story. Here, things can be frustrating by being difficult or just plain outdated. I have missed Seoul from the moment we boarded the plane here. I cried the entire flight. I have wanted to go back from the moment we got here. And I finally got my chance. But there was a catch. A huge catch.

The Chinese government won't consider Raelynn an official US citizen until she goes to a Chinese Embassy in America to get her visa. Don't you have enough citizens, China? Sheesh. This place is full of your citizens. Xiaolong and I had to take care of some important paperwork with our marriage certificate back in Seoul. The Chinese government again was making things difficult by telling us they wouldn't recognize us as a married couple until we went to the Chinese Embassy back in Seoul to get it validated. And so, because Raelynn doesn't have a Chinese visa from one of the Chinese Embassies in the states, we had to leave her here. With my dimwitted in-laws.

To their credit, Raelynn was alive and relatively unscathed when we came home. But of course, my in-laws didn't listen to us on some things. I'm not too angry though as it came back and bit them on the ass. Hard. See, the day before we left for Seoul, Xiaolong and I had lunch out at a nearby Chinese restaurant. It's hot out, but hey, why run the A/C, right? Cheapskates. It was very hot in the restaurant and Raelynn became instantly agitated. So much so that I could only get several bites of food in before we gave up and had it packaged as take out. Nosy people kept coming to stare and I yelled for them to go away. Normally, this would make my husband uncomfortable for me being a total bitch but he was totally behind me on this one. As soon as we got outside where, by comparison, it was largely cooler (and breezier), Raelynn stopped screaming immediately. We warned his parents to make sure that Raelynn is not at all hot. She'll whine a little if she's cold but if she's hot, she'll flip out. Apparently, my in-laws didn't sleep much during their 6-day stay with Raelynn. And I know just why.

But meanwhile, back in Seoul, we handled our paperwork with relative ease. And I turned 35. It doesn't feel too different from 34. I wish I were as skinny as I was last year before I got pregnant but Rome wasn't built in one day, now was it? More than being stick thin again, I wanted to be with my little baby but that wasn't going to happen. I was torn between two loves. My love for Seoul and my love for my daughter. Ultimately, the love for Raelynn trumps all. We decided to make the best of it and try to enjoy the city we both love so dearly. It was complicated due in large part to SK, the phone company I'd had my prepaid phone with before I left, which was handed down to me from my brother when he'd lived there. I never had trouble adding money to it before. But now, they made some upgrades and my phone was considered obsolete. Because they wouldn't add money to it at the SK location in the airport where you can actually rent phones, I had to go into the city to find this out. Now we were stuck without a working phone. My husband's cell from China would only accept calls but would not dial out. We had to make do with pay phones which were all very difficult to use due to being in crappy conditions. I get it...why replace those phones when everyone has a cell phone? Little things like this are what make foreigners feel unwelcome there. Still, we did the best we could with what we had. 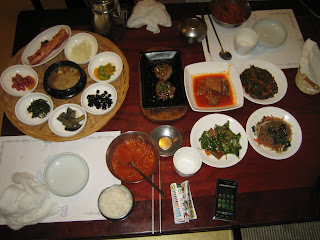 For my birthday lunch, we enjoyed a traditional Korean meal. We so totally missed all the side dishes that come with the meals here. Yum!


We enjoyed the Korean dishes we'd missed all these months. We managed to get in touch with some of our friends and enjoy drinking in their company, though there were still many more we couldn't reach, much to our great dismay. We visited the site of where we got married. There was a lot of walking and shopping involved too. All in all, a lovely visit. But something indeed was missing. And that was our little Raelynn!

While we did our best to enjoy ourselves despite missing our little angel, my in-laws suffered the consequences of not heeding our advice. We had called via calling card each day while we were away and his mother mentioned they did not sleep more than 3 hours a night. When we came home though, I figured out WHY they didn't sleep. Sure, Raelynn missed us tons and was probably annoyed that she had to hang out with her grandparents for that long without seeing us. But that's not why she kept waking up. I discovered just why when we finally got home. It was very hot outside, about 80 degrees. And when we got upstairs with our luggage and entered our home...it too was 80 degrees! And muggy, just like outside. They had the windows open during a huge storm. It wasn't one of those storms where it cools everything off either. It was as bad as I remember how hot and wet the summers of Florida are. I also discovered one of Raelynn's long sleeve shirts on the couch, a sign they'd had her dressed in that. This particular shirt is made from terry cloth, not exactly summer material. I checked the baby's closet and all the short sleeve onesies were clean and folded, waiting to be worn. Raelynn herself was wearing a short sleeve onesie when we got in. The same one we left her in too. Nice. They must have yanked that long sleeve job off of her when we called from downstairs. I have no doubt that they overheated Raelynn each night trying to save on electric. Dude, it is HOT. Just use the air! It is only hot here from the end of June until early September which isn't as bad as most places. Friggin' morons could have slept a good solid 5 hours each night if they just listened to what we had told them. Joke's on them! Ha!

We hated to leave Seoul but we were so happy to get home to our daughter. And after the hellish day of travel we had in order to get home (coming soon in a future post), only one thing made it all better...Raelynn's smile. 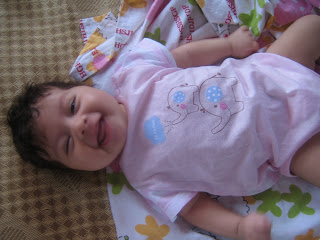