Even if it means we have to spend it with the trolls.

Small Chinese New Year, as my husband calls it in English, is about one week before the actual gigantic Lunar New Year celebration. Traditionally, the people of China just couldn't wait to kick off the festivities, so they started having a smaller celebration one night the week before just to tide them over. There's tons of food, drinking and fireworks but it is all small-scale compared to what will take place next week.

Last year, we had to go to my in-laws' house for the occasion. This year, because I'm pregnant with their second grandchild, they were happy to come to us. The real reason is that their house truly stinks worse than 1,000 silent-but-deadly farts intermingling with fish guts, but my husband would never tell them this. You are actually supposed to go to the older family members' homes because it is considered rude otherwise. So it is truly a blessing that they agreed to come to our home for this and the official Chinese New Year holiday.

And it IS fun. Despite my in-laws' being here. And the mess being created in my kitchen. And my inability to drink anything with alcohol in it thanks to the sweet baby inside of me. At least here, our home is cleaner, more comfortable, has more than just Chinese cable TV, is filled with all of Raelynn's toys and I can sneak away to play on my computer. Excellent!

So, on a smaller scale, fireworks have been going off most of the evening. But when the real deal happens, it will be a constant din of popping and kabooms outside. Now, it is becoming more intermittent as the night wears on. During the actual Chinese New Year celebration, Raelynn will likely have to sleep with us because the noise is so intense.

The food is supposedly on a smaller scale too, but you wouldn't know it looking at it. Oh no no no. And this is one of the few times where MIL's cooking is spot-on. She pulls out all the stops for this mini-fiesta and goes even bigger for the official day.

So, let's take a look at my 4th Small Chinese New Year celebration, shall we? 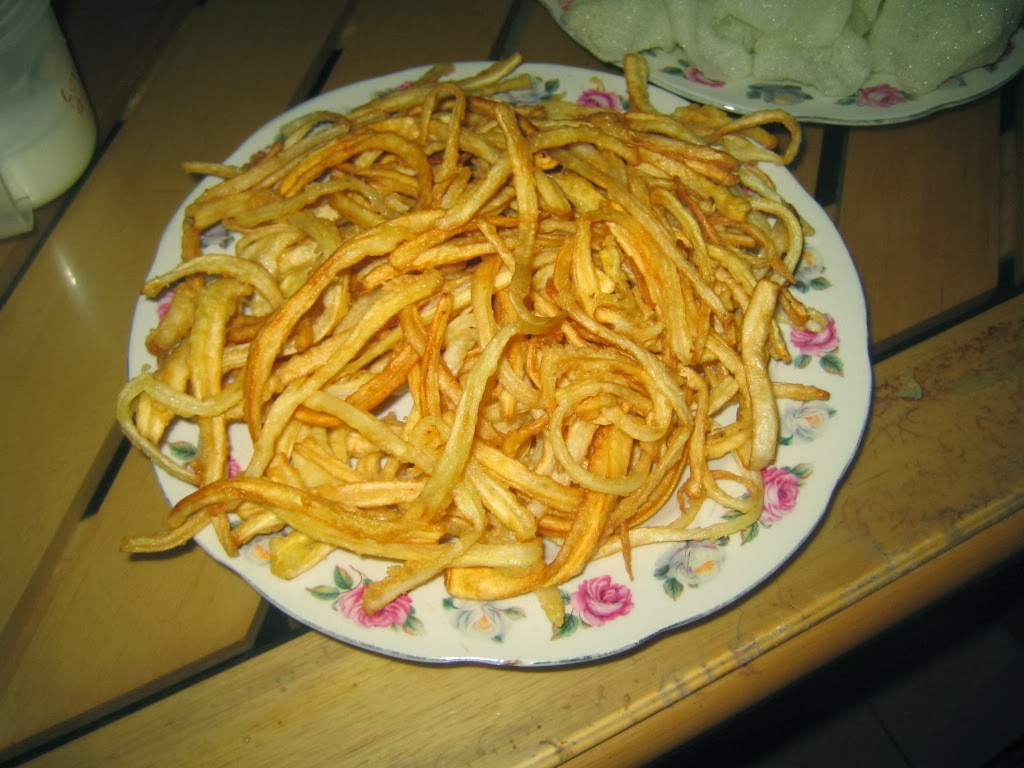 Hey, cool! French fries! Right? Wrong! It tasted a lot like them though as far as the seasonings and method of preparation. But the texture gave it away that it was not potatoes. It's actually ginseng root. This was one of the first things she put on the table, like a small pre-snack to dinner. I used to eat these back in the states too. I thought she just popped open a bag of shrimp chips and put them out with those ginseng fries. No! She MADE these. Holy fucking wow. MIL did something cool for a change. That IS amazing. 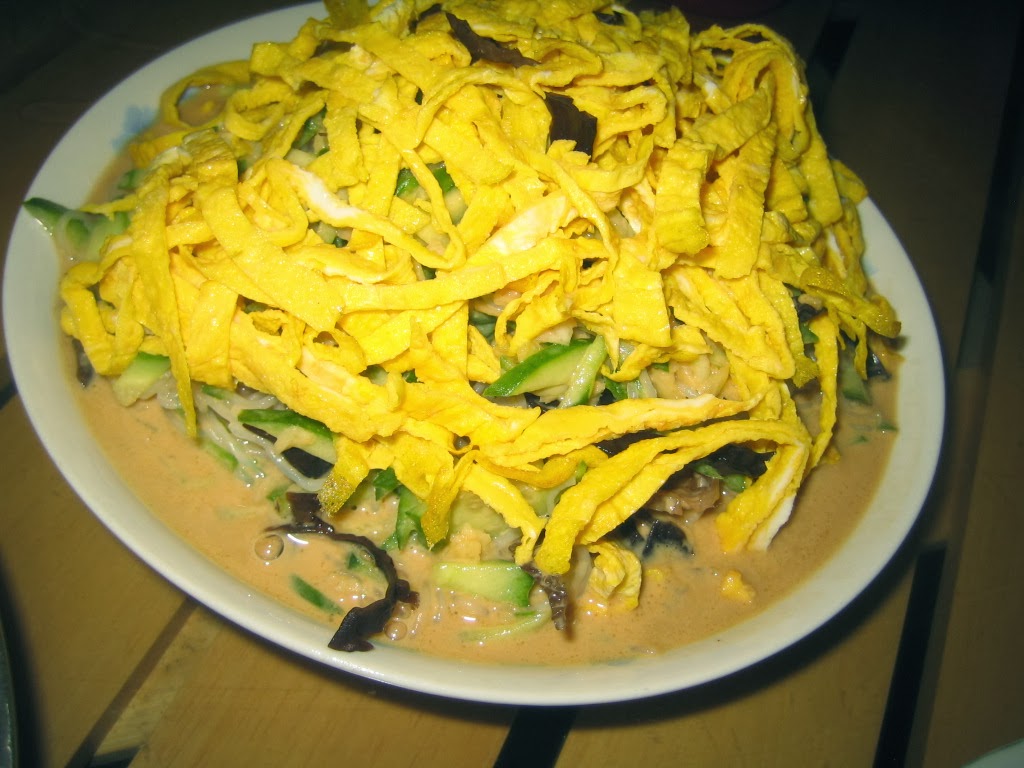 This is MIL's version of the la pi dish I liked from the Chinese restaurant we went to recently. She killed it. Why she doesn't make this more often I will never know. 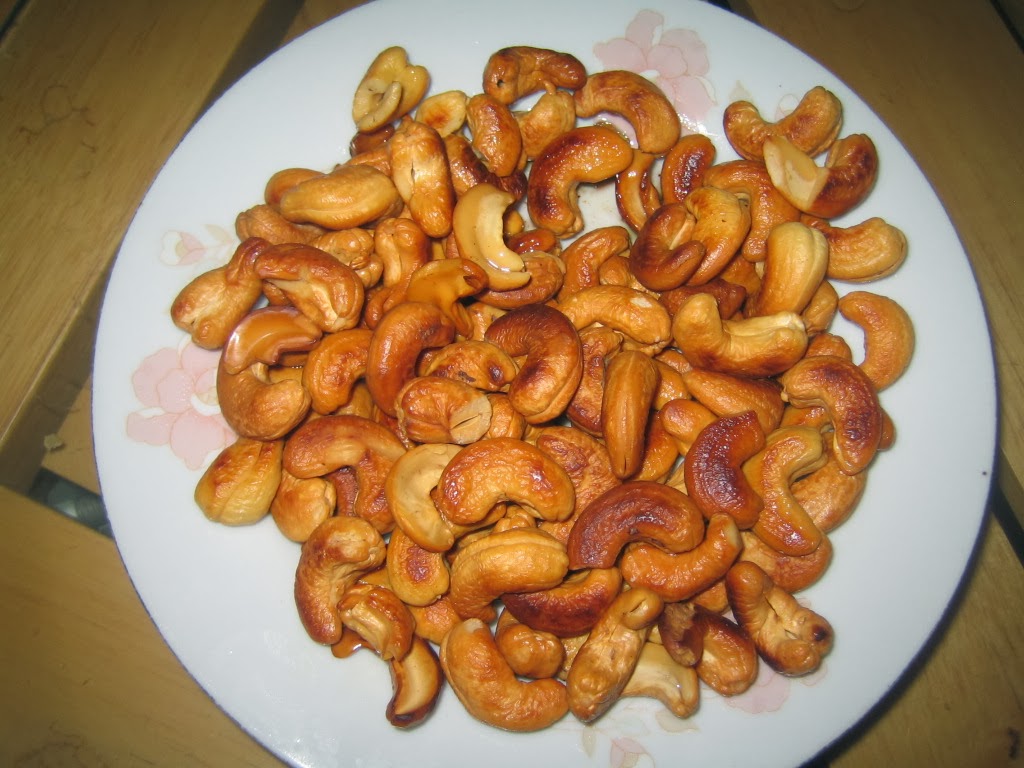 Toasted cashews. Another snacky little thing that I had grown sick of last year, largely due to the fact that for weeks, she kept serving them to us, leading me to believe she'd bought a ridiculous amount of them. Because we haven't been forced to eat these with every meal, it was so nice to have them again. 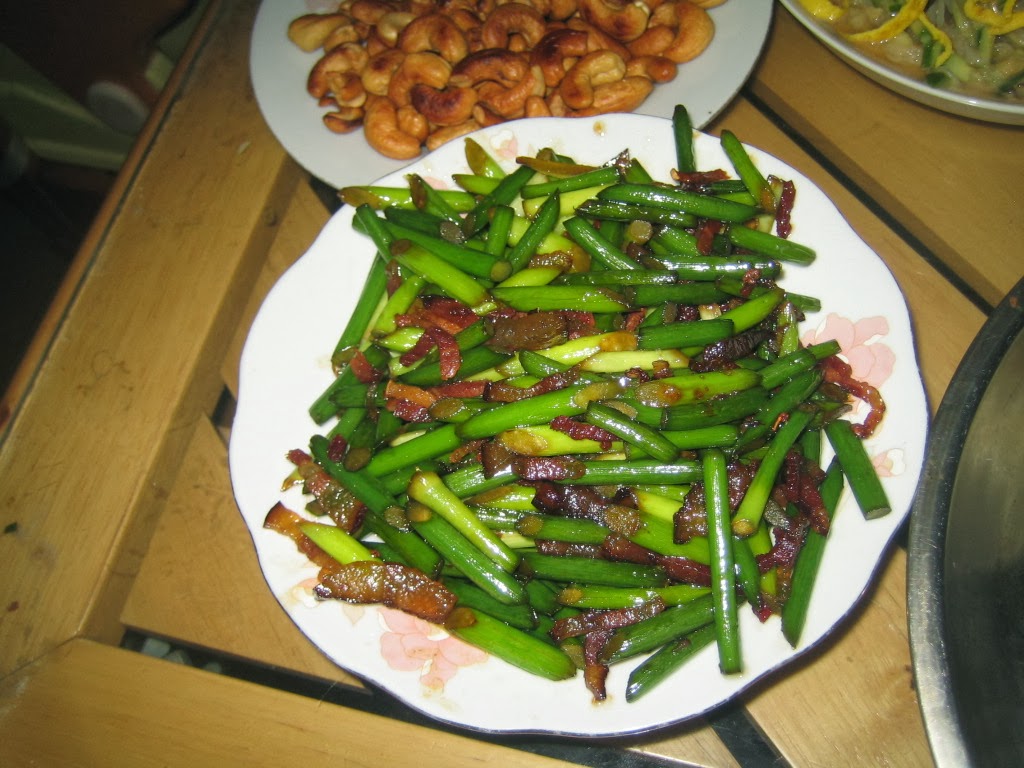 This is some strange but tasty green vegetable with some gross meat bits. Not my thing at all. I was about to snag some of the veggies there but the meat put me off. 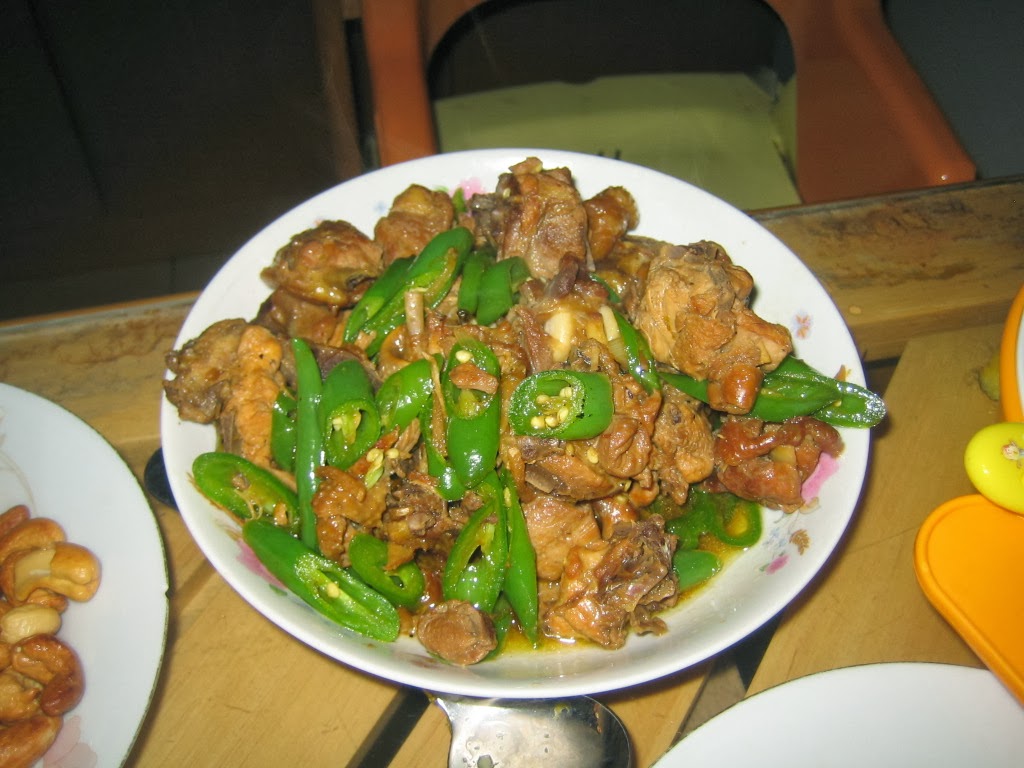 Pepper chicken. I asked for pepper steak, dammit. But hey, it was delicious all the same. I just can't get past the mangled chicken pieces here in China. They hack up every part of it into unappetizing boney bits and being pregnant, it makes me feel queasy. 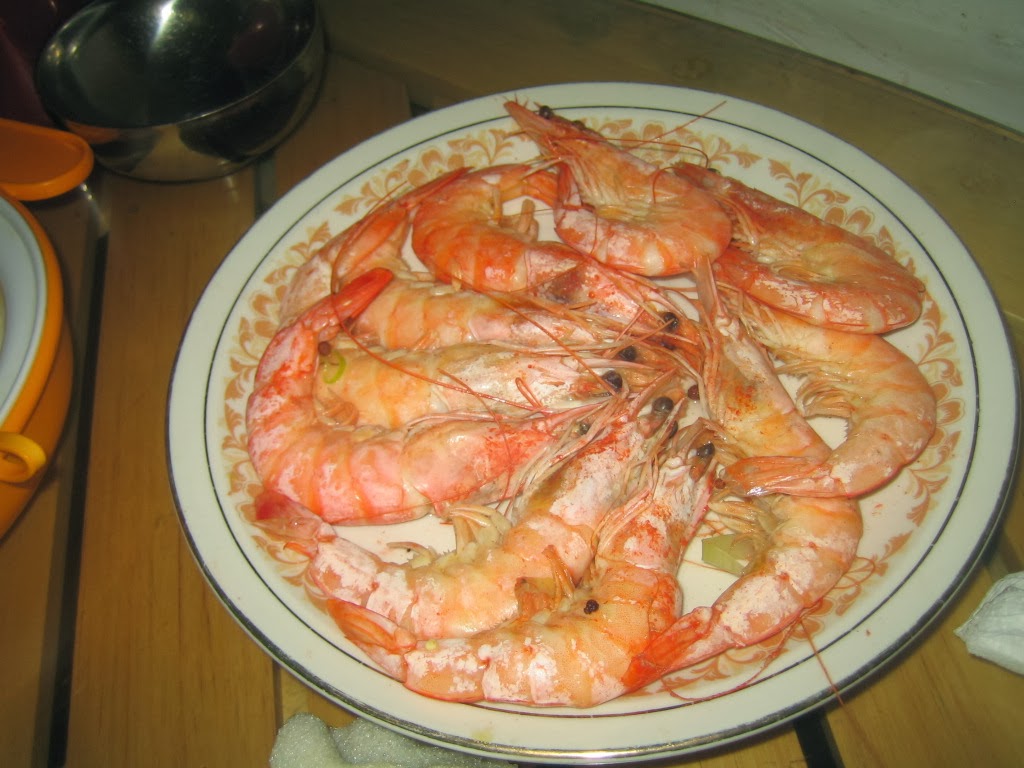 Fresh jumbo shrimp. Even MIL can't fuck this one up. 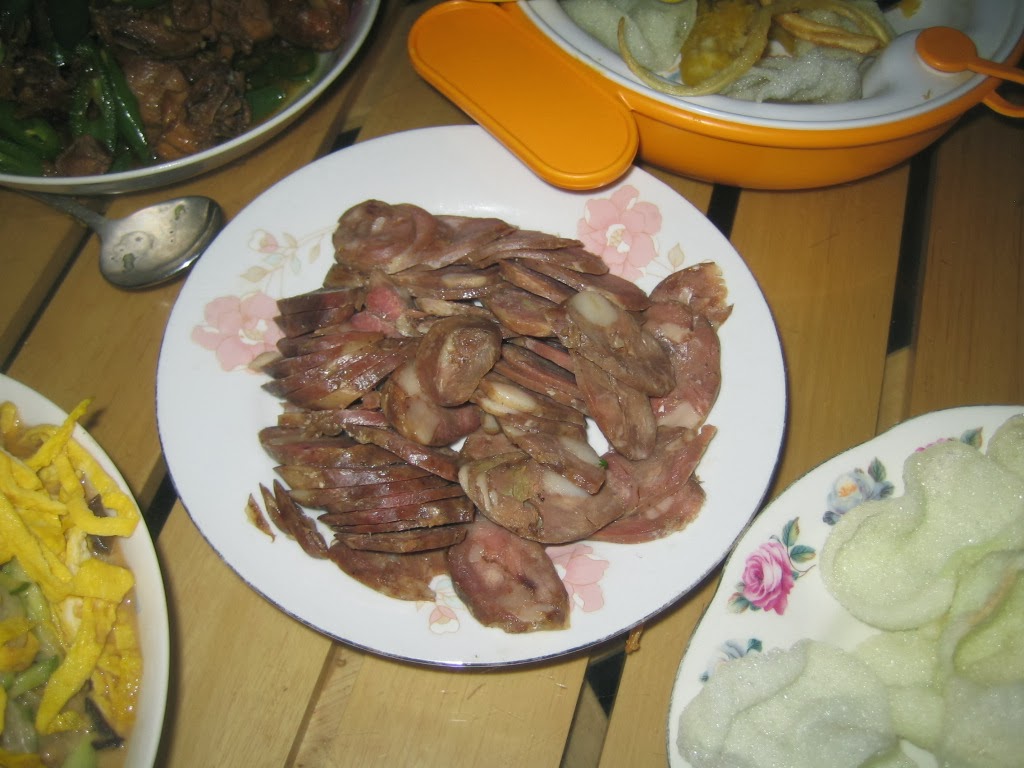 Chinese sausage. Ack. No thanks! 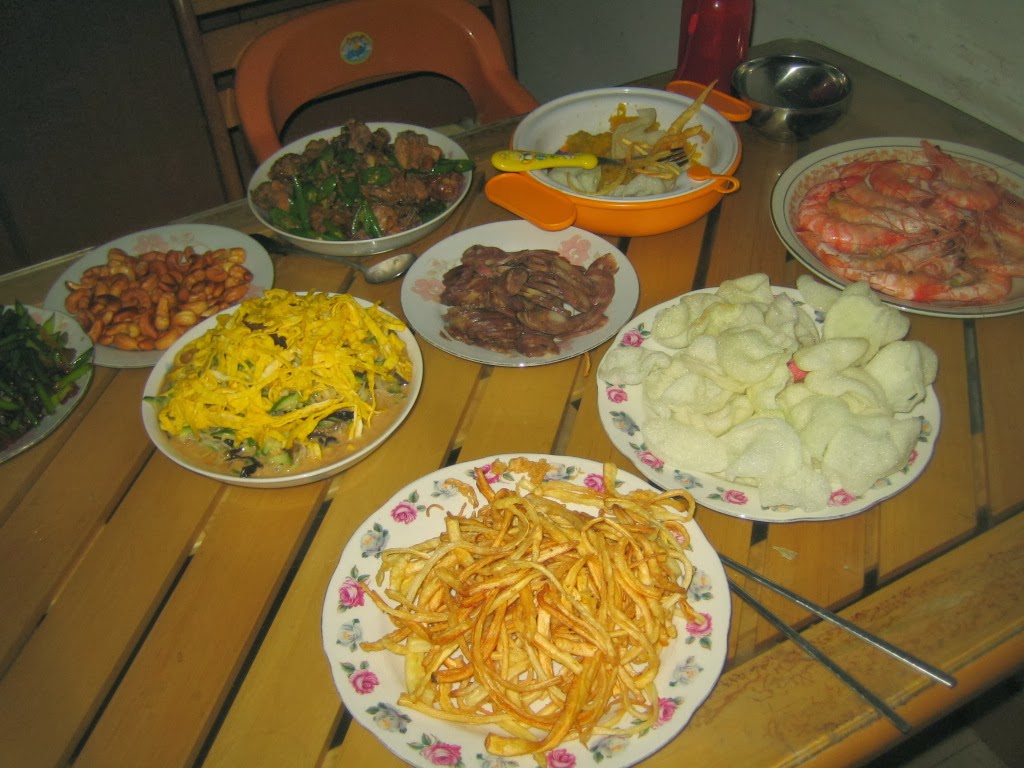 You can see from this shot that the table is starting to fill up fast. But wait! There's more! 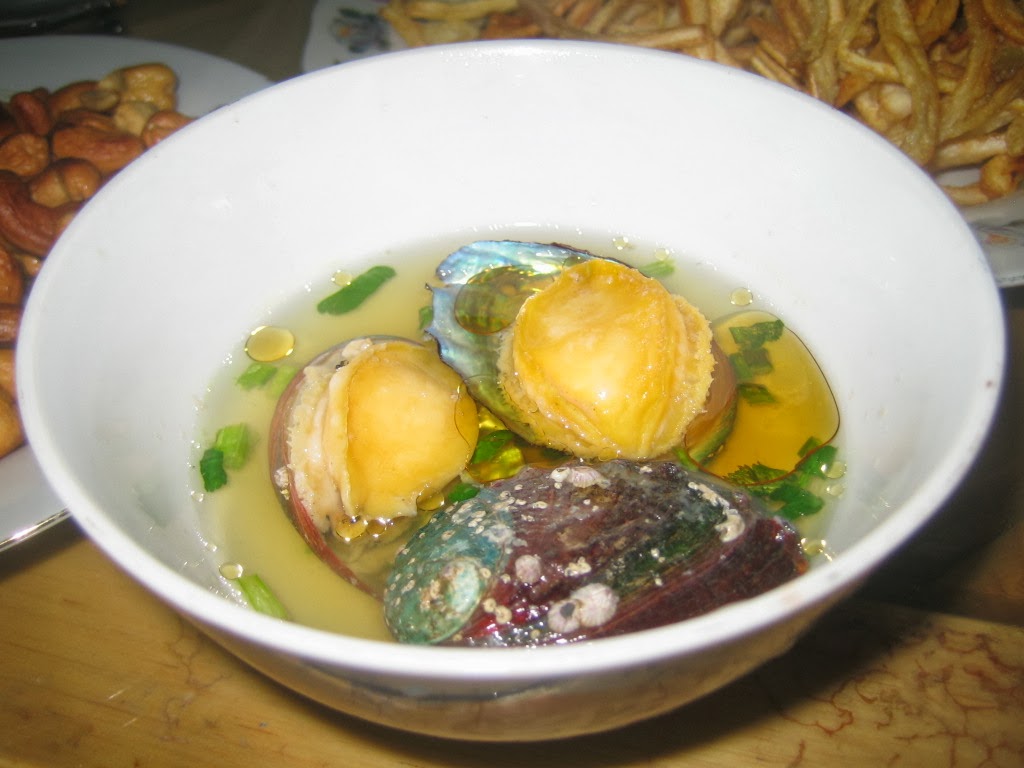 Abalone soup. See what I mean? She goes all out for these holidays. This stuff is not cheap. I usually love abalone, but the flavor of it disagrees with me now. The broth didn't at least and for that I was happy. By the way, this is what was happening in my kitchen. With Jeremy's help, she actually cleaned this whole insane-o mess up. 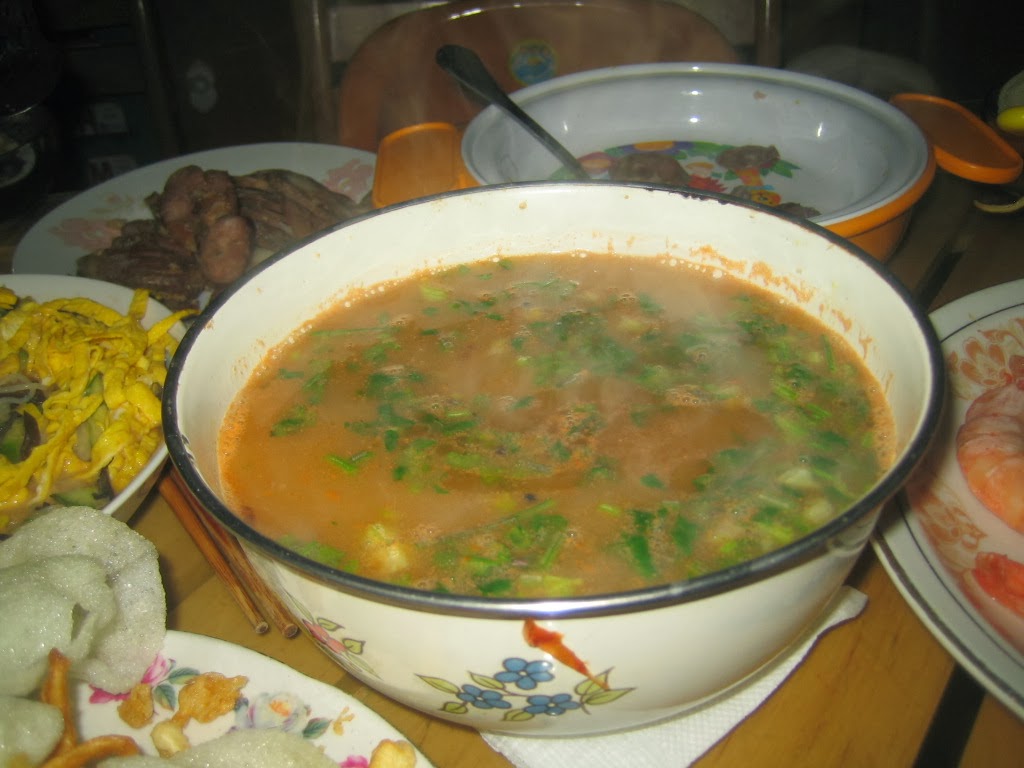 This is actually a big bowl of steamed egg topped with a broth. And it's wonderful. At least I was enjoying it until MIL dumped her leftover broth from her bowl of droppings back into it. And that's when I decided I'd eaten enough of this dish. 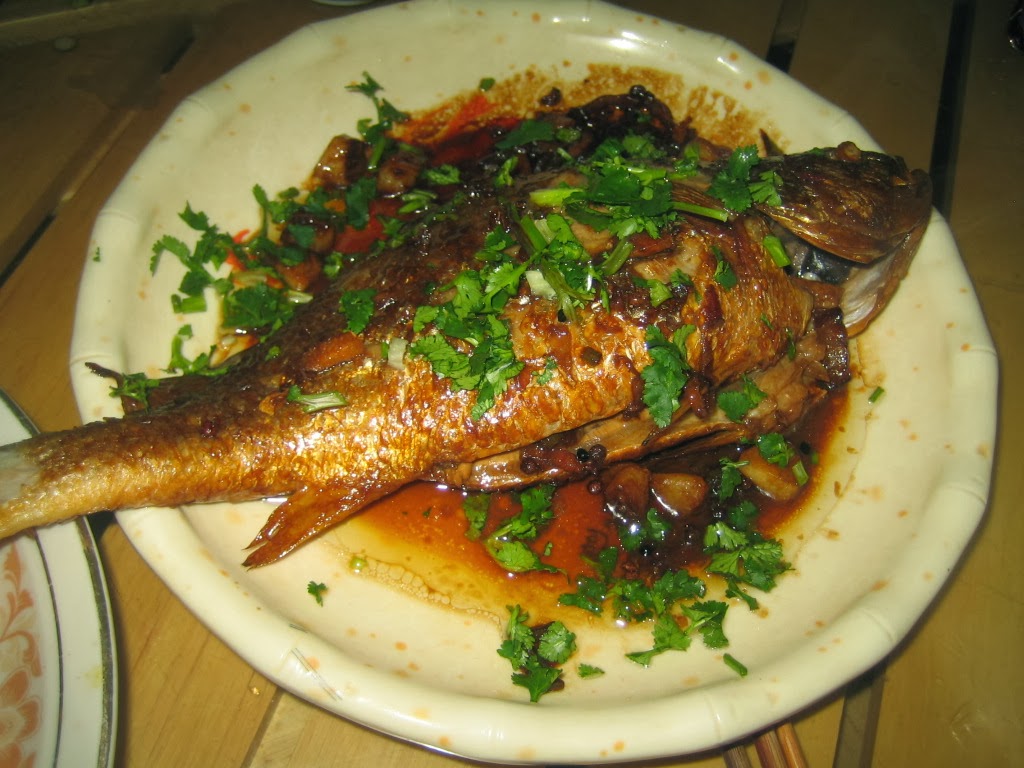 It's MIL's signature steamed fish dish. You can always count on it to be perfect. Nice job, MIL! 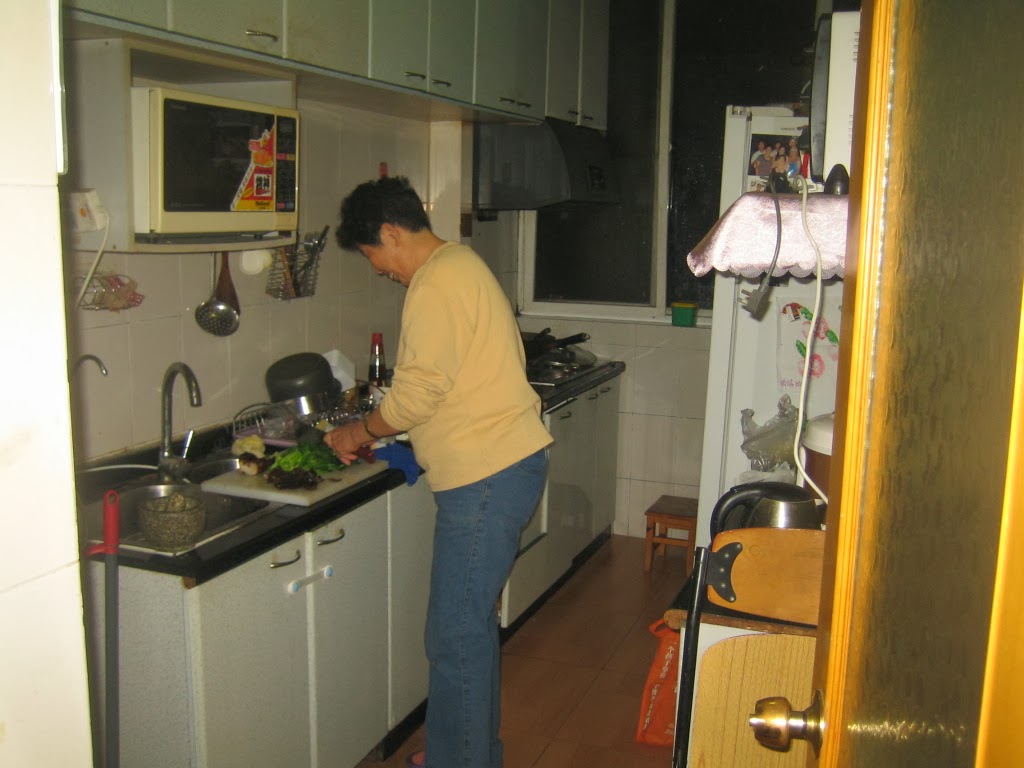 And speaking of MIL, here she is making EVEN MORE FOOD! Yes, really. They know how to do holidays right here. And yes, she's laughing as she's prepping those vegetables because she thinks I'm funny for telling her there is too much food. Unlike dining out though, leftovers will be eaten for the next few days here. At least by Jeremy. I'll grow weary of them after a day. 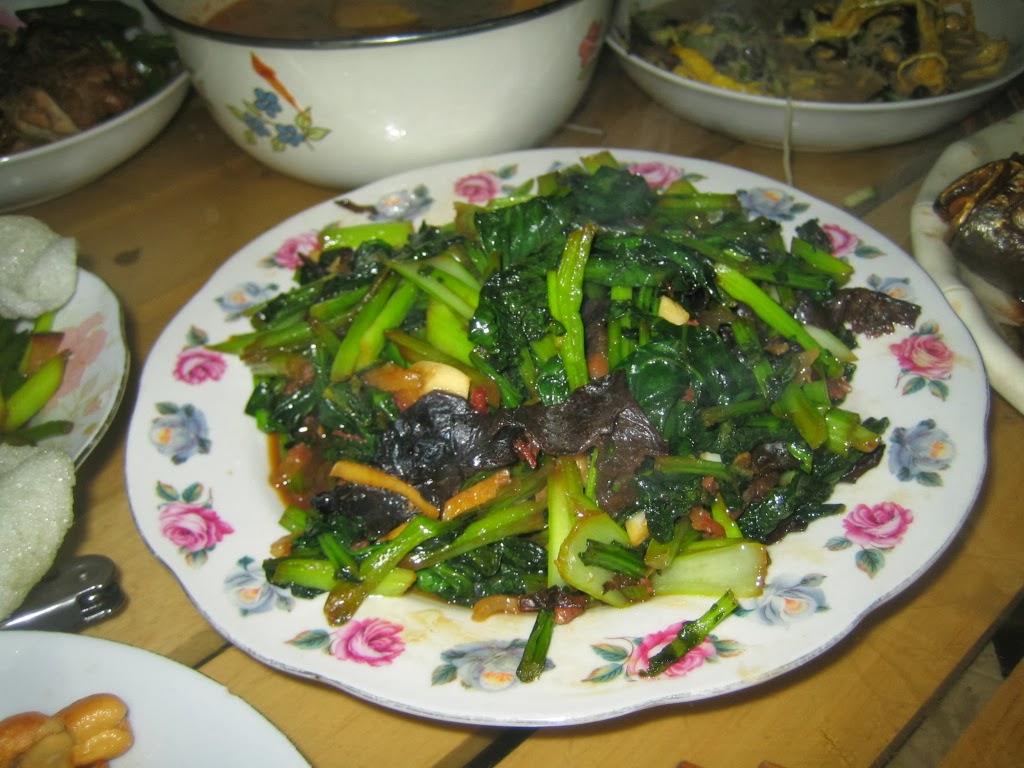 This is what she was cackling away and preparing in the last shot. It's some green Chinese vegetable with a greasy meat. I just couldn't get into it, but since she offered it to me, I had to take a teensy bite in front of her so as not to offend her. 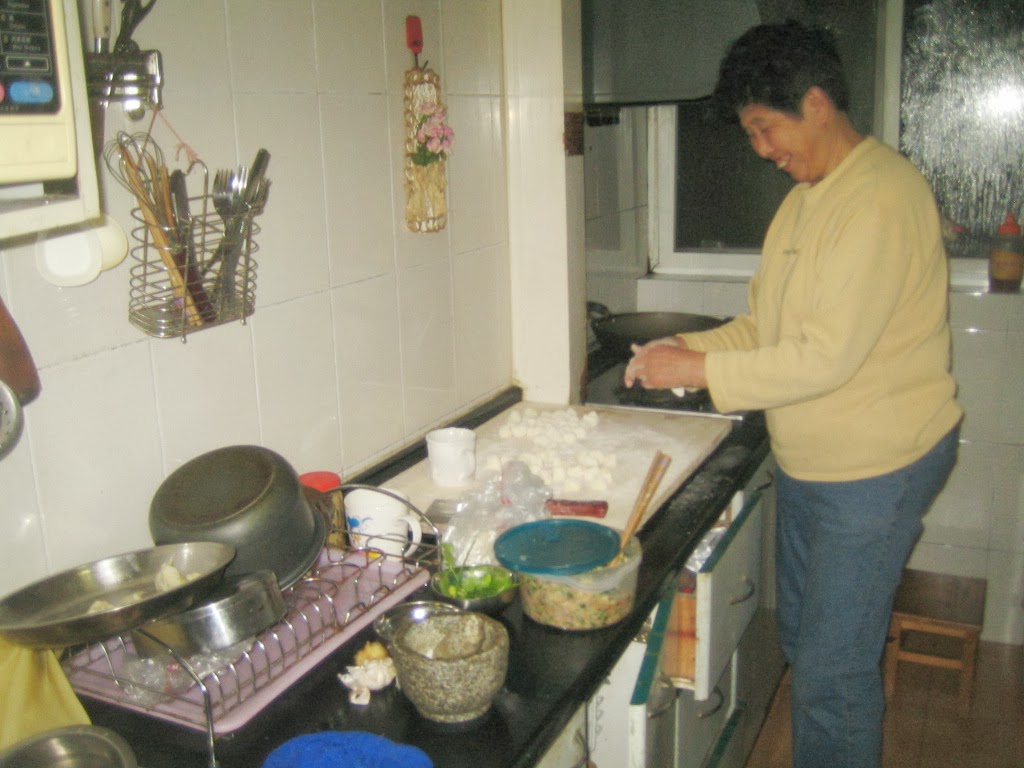 Again, she's making MORE. We're all so full we want to puke. There's still tons of food on the table. And here she is making dumplings. It is tradition and considered good luck so you must have them. And again, she's laughing at me because I've just told her I'm too full. Between the food and this baby, I feel ready to pop. I look about 10 weeks further along than I actually am as I come up on 14 weeks. She tells me we can eat them tomorrow but I suspect I'll still be full then too. Still, just for good luck and to be polite, I ate just one of the dumplings when she finished them. She worked her ass off cooking and cleaning. She's earned a standing ovation for this one today. You know I seldom say things like that about my MIL but she's not all bad. She's annoying and pushy, but when it comes to these kinds of things, she really goes above and beyond to make it rock. Though I must say, she would be so much cooler if I could have gotten drunk. Oh well. Next year!

Someday, when we move away from here, I will absolutely miss the Chinese New Year festivities. Definitely not the fireworks. Or my in-laws. But the rest of it, for sure. It's why finding a community where other Chinese people live is very important to me. Jeremy will be sad if he can't celebrate this holiday, much like I'd be if I couldn't celebrate Christmas. I want to be sure we find a place where we can celebrate the Chinese New Year, both small and big.
Posted by JQ at 5:32 AM