Tomorrow is the official Chinese New Year celebration. But that didn't stop my husband from inviting his parents over this evening. I was a little annoyed since I'd planned to use one of our cans of Thai Choice Panang Curry so we could enjoy a little bit of an exotic meal. I know way too many people that are vacationing in Thailand right now. We might not be able to go ourselves, but at least we can bring Thai food to our table. But Jeremy surprised me...he said to go ahead and make the Thai meal as planned and that his parents were just going to come to see Raelynn.

Fine, I thought. After all, we should celebrate. Sorry to be such a total mom-dork here, but Raelynn finally made a poo in the potty today. She had only done it once before and it must have been a total fluke. Because despite becoming a pro at peeing in the potty and not having any pee-related accidents for over 2 weeks, she kept crapping in her pants. EVERY DAY. We tried everything we could think of and I began to think it was hopeless. If you're a new parent reading this now, just you fucking wait until you have to potty train your kid. It fucking sucks. But they do catch on eventually. I was becoming worried because I can take her to school with me in March IF she can use the potty. Now it looks more and more like she will come to school with me, and less and less like she will stay home with MIL and FIL. It makes me so happy, of course until I think about how I'll have to go through it all again when Baby Qu #2 is born. But we'll worry about that later, I guess.

MIL wanted to make us her lamb soup. It's not too bad, I suppose, but I was in the mood for Thai. So off I went into the kitchen to begin cooking before the in-laws arrived.

Regretfully, I have no photos because my camera battery was charging during this time. So you'll have to endure these internet photos of Chicken Panang and Thai-Style Broccoli. 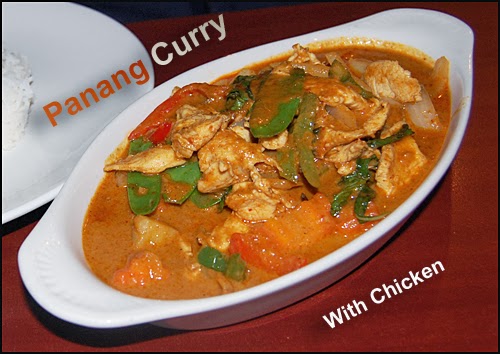 Mine looked better than this. No offense, Internet Picture. 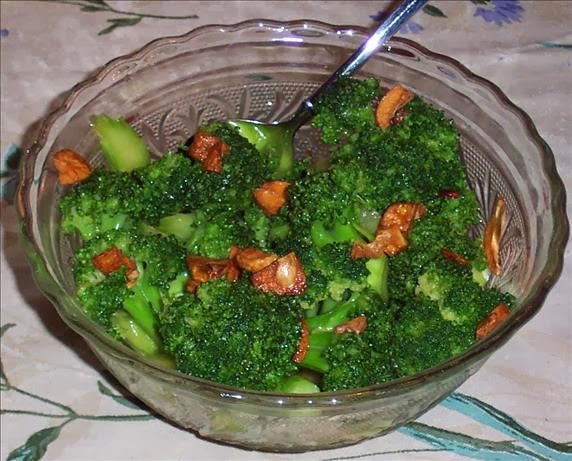 I also made homemade chicken nuggets for Raelynn because, even though Panang is a more mild curry, it is still too spicy for her.

And I made rice. Which was kind of funny because I was just about done with the Chicken Panang when I noticed I'd forgotten to plug in the rice cooker. I'm usually not that stupid. I blame it on being pregnant.

MIL starts her soup once I'm out of the kitchen. It looks like this photo I found online but without the noodles. 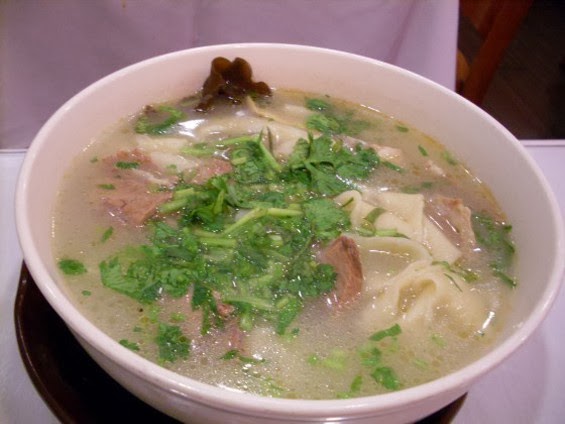 And while that's cooking, we sit down to eat. I offer my in-laws the Thai food. MIL never wants to try new things. But FIL is cool like that. He happily snapped up some chopsticks and dug right in. He raved about the broccoli. And the Chicken Panang? Once that rice was ready, he was pouring the chicken and sauce on top of it. I think we turned him into a fan of Thai food. Maybe he was wishing Chinese food tasted that good. I know that's what I usually wish. 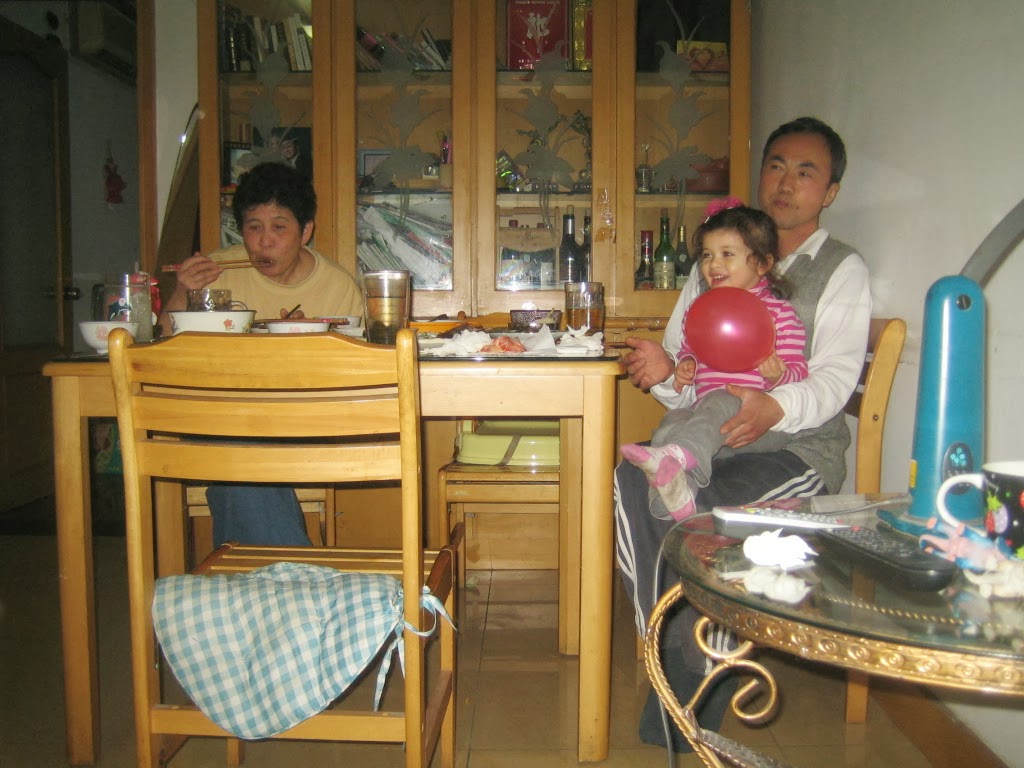 Here's a photo of MIL and FIL as they eat, from the Small Chinese New Year last week. Just so you have a visual of them chewing. Because I have to see it and suffer through it so there.

MIL had to be convinced to try it. But once she did, I could see by the look in her eyes that she really did like it. Stubborn old mule that she is, she acted like it was just ok, but I caught her sneaking a few more spoonfuls of it. She seemed so surprised that I ate a whole plate of rice. She's never seen me do this in all the time she's known me. That's because I NEVER DO THAT. Not unless I have any Thai sauce to top it with. FIL had to agree. He scarfed down his plate of rice more quickly than I've ever seen him eat anything. Jeremy went on to explain to his parents how we love Thai food. His mom had a look on her face I've never seen. Not a bad look. Just a look that said she was learning something about her own son that she didn't know about him before. An interested look, but one that seemed to realize there is more to him than she expected.

It must be strange for her. She raises a son who grows up in China. And goes off to college in another part of China. And he travels throughout China, playing on his soccer team and grows up, realizing he wants to see more of the world. He up and moves to Seoul, South Korea, where he doesn't even know how to say "hello" when he first arrives and studies there for 4 years, earning a Master Degree. It doesn't make him any less Chinese of course, but Jeremy, through his travels abroad and through his foreign wife (that's me) and foreign friends has absorbed all these other things into his life. He's tried food his parents would never sample. Well, FIL would give it a try on his own. But MIL needs some prodding to give it a whirl. I kind of feel sorry for her now. I'm so lucky that I didn't grow up just eating burgers and pizza and other typical American fare. I learned, thanks to my father, how to enjoy food from around the world. I cannot even imagine what it must be like to eat the same things every day and never even once venture out to try something from another land.

Today, it was really interesting to give that experience to my in-laws. I hope maybe it gives them a new perspective as we move into the Year of the Horse tomorrow. Maybe it will inspire MIL's cooking for the better. We can only hope!
Posted by JQ at 5:23 AM