The Schlumpy Female Newscasters Of Qingdao

Yesterday, Jeremy, Raelynn and I had to go to my in-laws' unfabulous house for what is known as the small Chinese New Year celebration. The actual Chinese New Year starts on February 12th, but Chinese people just can't wait to celebrate. This is one thing about their culture that I absolutely adore. It's about being as happy as possible, FIL had told me (translated by my husband of course) and I think that really IS something special to celebrate indeed.

I was disappointed that we had to go there though since I'd made dinner plans with my friend Christine. Raelynn and I were going to meet her for Italian food. Jeremy didn't even realize the date so he didn't care initially. He was supposed to meet a client. But then, he realized that it was the date of the small Chinese New Year celebration. He canceled his meeting but he told me Raelynn and I could go meet my friend still. I sighed heavily. He wasn't going to tell me no, but I knew if I didn't reschedule my plans with her, it would embarrass him and possibly upset his family. On any other random night, I wouldn't care. But I think I am obligated as Jeremy's wife to attend family dinners on special holidays. Fortunately, Christine is a sweet and understanding person and now our dinner has turned into lunch on Thursday. Oooh! A ladies' lunch! Fabulous!

Anyway, back to last night's dinner. I actually don't mind MIL's cooking for these holidays because she cooks good Chinese dishes. For the new year, she always makes her very best dishes. I wish she would remember to cook these things during the rest of the year. Maybe she forgets they exist. When I first came to visit Qingdao while I was still living in Seoul, I came during the harvest holiday at the end of September. She made so many delicious things that she had me fooled. I thought she was a good cook! She's not, sad to say. She gave it her best yesterday though. She served toasted cashews (afuckinggain! She must have gotten a deal on a ton of them or something because she has been serving these with the dinners we've been to over there for WEEKS!), cucumbers in garlic with shrimp (she serves cucumbers in garlic ALL the time too but she fancied it up with shrimp. This is not a bad dish but it gets annoying to eat it so often), steamed clams (good!), whole steamed fish in some sauce of deliciousness (another one she does well) and eggplant attempted in Beijing style but failing. The eggplant wasn't bad, but it wasn't Beijing style. I'll give her an A for effort though at least. Oh! And how could I forget? It is always tradition on this holiday to serve dumplings. And these she makes VERY well.

I needed something to keep me busy before we got to eating. And to keep me from going crazy while inside their home. I noticed that the TV was on and I smiled deviously as I sipped my Tsingtao beer. The last time we'd been there, I'd forgotten my camera on my desk and I was angry with myself because I was missing documenting the truly unfashionable way people here present themselves on TV. I just want to say that the following was done with my wonderful friend Aaron Gordon in my mind. Because if he could teleport over and sit on that wood couch from hell drinking beer with me, I think our laughter would have drowned out all the fireworks.

Next time you watch the news in the states, look at how the newscasters, particularly the women, are dressed. Impeccably, right? Their hair is perfect. Make-up too. And the clothes are fashionable and flattering. Well, for Qingdao's local station, allow me to show you what these people look like: 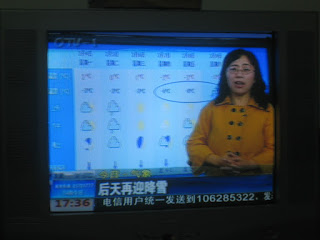 The hair! My God! What is that? A washed out perm? It's just horrible. Boring glasses. I don't even see any make-up. And that shirt/jacket/whateverthefuck it is...it looks like a bad uniform in a shitty Chinese restaurant. It's so amorphous and blobby. Ugh. Poor weather lady! 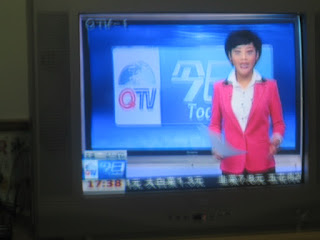 Next, this lady. She's probably the least hideous of the newswomen on the local channel. But this pink blazer is just a hair too tight and I just feel like they've taken extra pains to cover her up. They are so prude here, it's just unreal. While I hate boy-short hair on most women (so few can pull it off), this style isn't too awful, all things considered. Here, it is very common for women to cut off their hair like this. Only this woman actually has hers styled. Most of the women out there cut their hair short, like MIL, cutting it in an especially incongruous, utilitarian way that doesn't even look very good on the little boys here. No, this woman's hair isn't too bad. But the next woman... 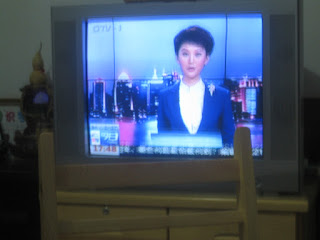 See what I mean?!?!? Who fucking cut her hair? I want to make sure that person NEVER comes near my hair. Good Lord! That just does not look good. At all. Again with the too-tight blazer. AND what in the world is on her shoulder? It looks like a bird shat up some sequined thing on there. And just like the last reporter, her white shirt under the blazer goes all the way up to her neck. Prudes. Ugh. 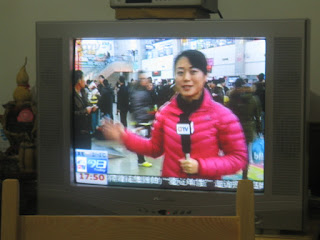 Live on the scene at what I think is the bus station, we've got this woman. She looks like she fell asleep at the news station, was thrown into the news van and just threw herself together in 5 minutes or less to go on camera. At least she blends in with the other people behind her. The only way you'd be able to tell she was a reporter is by the microphone. Back home, I've seen reporters in the middle of a hurricane looking more put together! 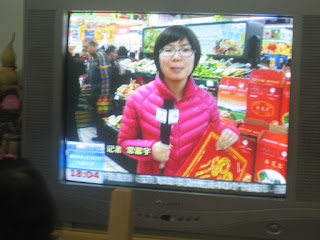 And here's another reporter on the scene. She's at one of the Carrefour stores though I can't tell which location. This is one of those little Chinese boy haircuts. Glasses that do nothing for her face. And the same Stay Puft pink jacket as the last lady! Did the other woman give her this jacket before she went live? I wouldn't be surprised. Blah.

Yes, these are just some of the women newscasters that Qingdao's local news puts on TV. Like this. They may as well just grab some of the women peddling vegetables on the street. In Shanghai and Beijing though, you would never see such slovenly crap flapping their gums at you on the news. No way. To give you a good contrast, this next photo is from the international news channel. Meaning, if you are outside of China and want a Chinese news channel, this is it. The station for the international channel is located in Beijing. Take a look... 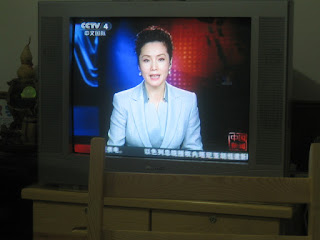 HUGE difference, right? Her hair is slicked up in a complimentary way. Her suit is quite stylish. The make-up! The earrings! Qingdao News, please take notes. This news anchor looks professional and credible. She does not look like she sleeps in a gutted-out building or deigns to eat street food like the local news folks do. Oh Qingdao! Why can't you be more like Beijing? Well, don't be like it in pollution. Or rude people. But be like it with food. And style. Or be like Shanghai. That should be your goal. It's so awesome there.