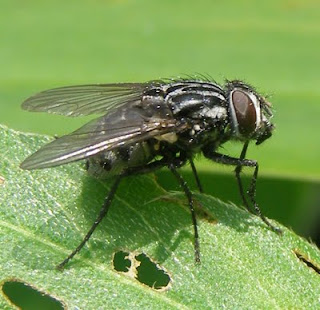 While most of the flies I've killed today are smaller than this one, I had several large mammojammas like this one here. Eek!


Early this morning, my husband left for the city of Jinan. It's in our same province (Shandong) and it takes about 3 hours to get there by bus. He'd hoped I would come along and I know his troll mother would have jumped at the chance to continue making the mess she was making from yesterday and hog the baby all to herself. Not so fast, Trollzilla. I didn't have enough breast milk stashed in our freezer so there was no way I could go anywhere without the baby. As a lovely kind gesture even more delicious than the chocolate donuts he brought me yesterday, Xiaolong asked his mother not to come over today. It's Mommy/Daughter day in the Qu household! But while she naps and rests up for our adventures (which include rocking her while I watch satellite TV, playing with her toys, tummy time, imitating the faces Mommy makes and just watching me do whatever it is I do), I have become...THE FLYSTALKER.

I noticed some flies in here last night while we were eating dinner. I figured they followed the smell of unwashed human wafting off my MIL when she visited yesterday. Or it could have been from my FIL who came to fix our bed frame (yeah, yeah...I know what you're all thinking and you'd THINK this stupid bed would've collapsed while we were doing something else. Likely, it's what caused it to START to break but it was my husband's flopping down onto it while I was holding the baby that caused the actual collapse). FIL was pretty sweaty when he got here. Or...it could have been MIL's sister. At any rate, I have no earthly idea how these little bastards got in here. It's been too hot not to run the A/C and any time we've opened the windows, we've used the screens. There are just too many of them to have snuck in. But now, I, The Flystalker, am trying to get to the bottom of this caper, whilst murdering flies left and right.

If you've ever had the pleasure of dining with me outside, you know my utter disdain for all bug things. Of course, roaches, spiders, wasps and bees are the absolute worst and will have me shaking in a corner somewhere if I see them. But flies just piss me off. They buzz around trying to land on your food or they fall into your wine and you have to pick their little nasty corpses out of your glass. I HATE THEM. I swat frantically and after a while of them trying to penetrate my food or drink, I start cursing and swearing while flailing my arms, looking a bit like a person with Tourette's.

Last night, Xiaolong and I were much like cats pouncing on our prey. We clobbered a few of them between us and neither of us noticed any more intruders. However, today is a different story as I am left to defend myself and the baby from these rude uninvited guests. After my husband left this morning, and after I'd made sure Raelynn was fed and changed, I went into the kitchen to make my breakfast. And that's when they all came out of seemingly thin air. What the fuck?!? I swatted and swore, using my sandals as weapons. I couldn't tell where they all came from but I was jumped by at least 50 assailants. Now I've been trying to get them to take their house party elsewhere. I shooed some out the windows. But as you may have guessed, flies are rather stupid beings and even when I was trying to help them, they kept flying into the window panes.

Next, I went full force on their asses with a flyswatter. And I thought I'd eliminated all of them. Oh boy was I wrong! I'd gone to handle Raelynn right after breakfast because she'd begun to cry. So I'd left my dishes in the sink. Now that I'd gotten her to take her next nap after eating and play time, I thought I'd go clean those and make myself another cup of coffee. As I grabbed the rubber gloves off the towel rack, a crew (as my husband would say) of them launched after me! They came from behind the little rag that I use to wipe the kitchen counters with. I should have known that dumb woman better when I saw her with it in her hands yesterday. Every time, I have to tell her THAT rag is just to wipe up the counters with. Not for dishes. Not for big messes. Just to wipe the water off the counters along with some cleanser. She must have put it in something else though I cannot figure what because these little fuckers were all over it! I promptly tossed it out the door, but not before these damn things went all over the place. I tried to kill as many as I could and then went looking to make sure I'd found the source. But nothing else seemed to be attracting them, not even the garbage or the cabinets where she always sticks vegetables instead of the refrigerator (I was relieved to find just coffee in that cabinet today). Even the watermelon ripening on our counter was fly-free. They wanted THAT rag. It is STILL bothering me as to WHY they wanted it. But it's gone now, and hopefully, they are too. The Flystalker has tracked them throughout our whole home. I've smacked them with the flyswatter. I've crushed them with my shoes. I've thwacked them with books and the rubber kitchen gloves. I even sprayed them to death with kitchen cleaner (we don't have any bug spray).

Now it is eerily quiet and I wonder if I can change from The Flystalker back into Mommy. I love that Raelynn has slept through almost all of this chaos. I hope that I've gotten them all and that we can enjoy our Mommy/Daughter day together without any annoying visitors of the bug or family kind!

UPDATE!
Well, I spoke too soon. I changed the caption on the photo at the top because when I first posted this, I had just been fighting off smaller flies. But I've since encountered 4 large ones like the one pictured at the top of this post. Ugh. My war was far from over. I thought I'd pinned them to the rag but after I killed off what I thought was the last of them, there was another round hiding out. Damn these guys are good! I venture to say now that I have eliminated the enemy, breaking the flyswatter in the process. And if any happen to still be alive after my brutal assault, well, my husband will be home shortly and it will be his turn to go to battle with these pesky little shits.
Posted by JQ at 10:33 PM