The New Nastiest Bathroom In Qingdao

What's your biggest fear? Sharks? Plane crashes? My MIL and her cooking? How about having to go to the bathroom while you're out and about? And no, I don't mean #1.

Have you ever been walking around somewhere and suddenly, your stomach decides with an evil cackle of glee that it's going to drop and you realize that you HAVE TO go to the bathroom NOW? Hear me now, dear friends for I swear to you all that I will NEVER EVER EVER complain about any public bathroom in the US again. My worst fear right now is having to take a dump while out somewhere in China. There is a HUGE difference, believe me.

We went out to Taidong today to do some shopping for Raelynn's upcoming birthday. We went to the Babies, Women's and Children's store which has hundreds of vendors and lots of good deals. We'd noticed last weekend that Raelynn had outgrown her nice dress shoes so we thought buying her a new pretty pair would cheer her up. As we walked around through the different stores, I felt my stomach pitch. Crap, I thought. I'll try to hold it. But I realized that was going to be impossible. I turn to the guy manning the shop we were in and ask him where the bathroom is. He kindly points as he tells me to go left and then straight.

As it turns out, I could have found it based on smell alone. Chinese public bathrooms smell like death warmed over, rotten urine and low tide at the pier, and that's on a good day. Jeremy urges me to wait. "I can't," I tell him. I know I'm not going to walk into the Ritz or anything. I know it's not going to be pretty. I know it's going to be like one of these nasty bathrooms I've seen before. But honestly, I wasn't expecting it to be even worse than the worst ones I've seen.

I feel like I'm going to explode as I round the corner, Seoul curiously staring up at me from the carrier. "Sorry, girl," I tell her as we further immerse ourselves into the stench that had wafted into the corridor to welcome us to the bathroom. And suddenly, I stop short. There's a woman standing and waiting and as I line up behind her, I see the most horrifying thing a gal who needs to take a shit could possibly see in a public bathroom...NO DOORS ON THE STALLS. Not on any of them! 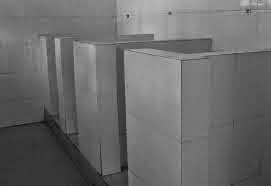 I found this photo here, from someone who apparently had a similar reaction to finding a bathroom like this. I didn't have my camera with me and even if I did, I had more pressing issues like trying to poop without being watched.

In the bathroom I encountered, the stalls were taller at least but there were no doors. If it were a matter of having to pee, I'd have held it. It was either poop here or poop in my pants. I scurried to the last stall because there was no stall across from it. A shred more privacy than the others, I thought. But as I hurried to do what I'd come to do, some of the others doing their business had spotted me and my darling baby come through and I could hear their commentary. Oh what a pretty baby! Look at that baby! All the while, I'm thinking, NO! DON'T look over here! I'm trying to poop in peace! Yeesh! GO AWAY!

I guess I should be grateful that there were stalls at all. A friend of mine here had once told me about how she and her husband had been on a bus in a rural part of China and when the bus made a pit stop, she desperately needed to pee. She followed the other women to the bathroom and discovered the bathroom was no more than a room with holes in the ground. The other women all crouched down and pooped, talking to each other as they did. THAT would be the only thing more disturbing than what I experienced today.