I Can't Believe It

You're not going to believe this. I can't believe it myself. And I cannot even believe I'm about to say this but I must rescind what I said about MIL being the worst cook ever. She's not. She's now officially the 2nd worst cook. 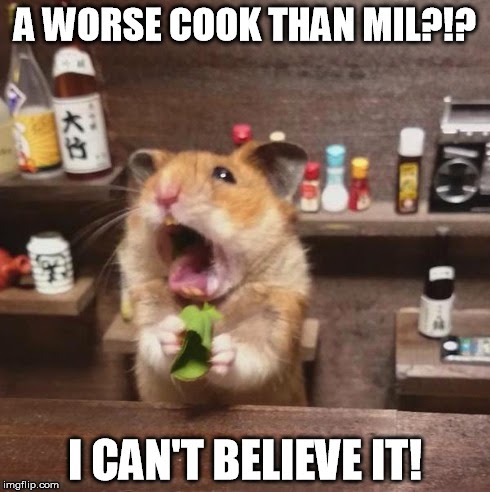 I know. I KNOW. And just so we're clear, I'm not saying MIL is suddenly some 5-star chef. I'm simply saying that there is someone who is a much worse cook than her. Now that is truly tough to beat, isn't it?

So how did we find a worse cook than MIL? Gather around, my children and I will tell you the tale...

It all went down this weekend. Some friends of Jeremy's invited us to their home for lunch. They're a nice married couple with a new baby boy that's about 2 or 3 months older than Seoul (and incidentally, their baby is gigantic). The wife told us she wanted to make us dumplings and asked if we could come on Saturday, but we had plans to attend the big ISQ Christmas Fair that day so we told her we'd love to if it could happen on Sunday. So Sunday lunch it was.

But when we got there, there was an old Chinese woman just like MIL cooking away. It turned out to be her mom. The mom was cooking for us, not her. Regretfully, I did not take any photos. I was busy with Seoul who was fussy from not napping sufficiently enough prior to our arrival, but let me just tell you that they almost made MIL's bowl of barf look like a culinary masterpiece.

The dumplings looked even worse than MIL's. The casing was thick and floury like MIL's but what made them by and large far worse was that there wasn't much filling inside them. And the filling was gross on top of that. She made some other thing that looked like rubbery pig feet, something I wouldn't even eat on a good day. And she also made some cabbage salad, which honestly was the only slightly palatable option. The husband had picked up 2 dishes from a restaurant - sweet and sour pork, and some eggplant with squid dish. Clearly, the restaurant he chose these items from was sub-par. But the worst thing of all on the table was a large, whole fish. MIL makes one and I have mentioned in other posts that it is one of the few things she does rather well (click on this post and scroll down until you see the fish if you want a gander). This woman did not do this well. It looked dry, like someone had put it on to cook and somehow set it to cremate. It looked so dry that it might shatter with the touch of your chopsticks.

I thought maybe I was just being picky so I politely ate some of the food (but slowly so it looked like I was eating more than I was). Except for that fish. No way was I eating that thing. When some space opened on my plate after forcing myself to eat 5 dumplings, the mom piled more of them on my plate. Nooooooooooooo!

When we had sat down to eat, the wife had brought this weird sugary yogurty drink that Chinese and Korean people alike love to give to kids. As a teacher here, I've been given them before too. They are SO nasty. I'm not a fan of them. Raelynn likes them enough but never begs for them. If they're offered, she'll accept. Jeremy told this woman not to give it to Raelynn, but she insisted. Raelynn drank it and then ate a few dumplings. She picked at her food which is unlike her when dumplings are around.

I should have known something was wrong when the wife offered Raelynn a piece of cheesecake from a nearby bakery. Raelynn refused it. Raelynn loves cake, especially cheesecake. She went and sat on their floor to play and then she threw up all over the play mat and herself. The good news was she felt much better after vomiting. The bad news was that it was everywhere. I began cleaning it up and the wife helped me, which was really nice of her. I hoped she didn't hear Raelynn tell me that she threw up because she didn't like the food.

If I didn't have much of an appetite before the barfing, I surely had none after. I just drank my beer politely and prayed we would go home soon before I was made to eat more of this truly vile food. I noticed Jeremy wasn't eating very much either. I would later learn that he too felt the food was gross. So at least MIL doesn't cook as badly as this woman does. Though their house was cleaner. The mom of this woman lives there with them and the baby. You know I would have run away and never come back if I had to live under the same roof as MIL, right?

Honestly, their house was nicer than ours. From the stairwell to the flooring to the layout and decor. We did the best we could with what we were given though and if you have seen my earlier posts, you know what we had to deal with. What I don't understand is how their house is cleaner but as Jeremy pointed out, they knew we were coming. He said the wife probably made sure everything was cleaned up first and that the mom probably makes as much a mess as his own mother does.

By the way, let me tell you about their giant baby. Jeremy and I were stunned that this baby is as fat as he is. And she's breastfeeding him! But apparently, not exclusively. That sugary yogurty drink? She gives that to her son. And she feeds him food too. Not in a beginning solids kind of way either. She asked me a ton of questions about breastfeeding and foods and such and I told her everything I know. How did I learn all of this? By researching it. But people here don't do stuff like that. This girl, and the hoards of others like her, just do what they are told. Don't question anything. I'm seriously amazed this culture has endured for over 5,000 years. How is that even possible? She seemed to be very interested in the process of properly introducing solids, yet a short while later, she brought out watermelon slices and tried to feed that to the mammoth baby. Then her mother was giving him apple which she was scraping off onto a spoon. Oy.

In any event, fat babies and terrible food aside, it wasn't a completely awful experience. But the next time we meet up, I pray we will be at our house or a good restaurant instead.
Posted by JQ at 6:09 AM