Have you ever seen Extreme Cheapskates on TLC? I tease Jeremy sometimes for being cheap but in all honesty, he's mostly just frugal with an occasional WTF cheap-freakout. He's good at saving money but also has no problems spending it. Except on batteries for the baby's vibrating chair for example.

Anyway, one night, we were watching TLC and Extreme Cheapskates came on. It was the episode with this guy: 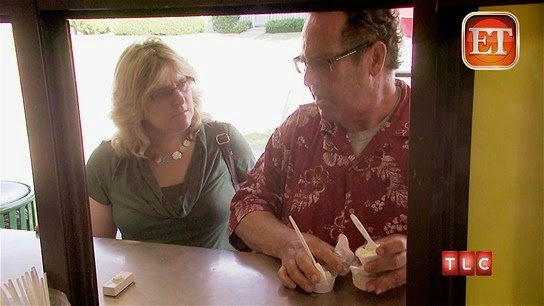 His name is Ron Hayes and we'll never forget him because he took his wife out for ice cream, except that he asked for about 12 different samples and then ran off with them. I feel sorry for her. That is so super embarrassing. Cheapskate! 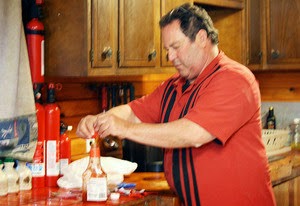 Here he is again, squeezing ketchup packets he got from somewhere into his ketchup bottle at home. So he doesn't have to buy ketchup.

Jeremy was making fun of him. He called him "Cheapskate Face" and we all know how hilarious my husband's nicknames for people are (remember when he called Seoul "Grandpa Face?"). He went on and on about how this guy had a cheap face and made fun of the shirt too. God, we laughed so hard.

Today, we went to Metro to get some groceries. Since Christmas is this week, I needed some things so I could make us an awesome Christmas dinner. My husband didn't pull any typical wallet-tightening moves this time. He told me to pick out anything I wanted for whatever I was going to make. But before we could even park the car, we encountered a real live extreme cheapskate!

I should mention that there seems to be a lot of stingy people here in China. Some of that is largely due to older generations still not being used to more plentiful resources. People here will travel places and bring instant noodles with them rather than buy the food. I think I mentioned that in the post about the idiots on the airplanes.

Somewhere between 4 and 6 months ago, the Metro installed a parking card system. You have to take a card and then wait for the electronic arm to lift and in you go. But as long as you are out before 2 hours are up, it's free. Even when we've dragged our feet around there, it's never taken us 2 hours to shop for groceries.

So as we pull in to park in the lot, there is a car in front of us. It stops, and an older woman gets out. Not geriatric old but older. And she leans in the window and talks to the driver. I can tell what's happening. These buttholes don't want to pay for parking. Heaven forbid! They're taking a long time discussing this so Jeremy beeps at them. She looks at us and then continues talking. So he beeps longer. Then she bitches at us and Jeremy bitches right back. I also add my own 2 cents, rolling down the window and shouting at them in English to move their asses and quit being such cheap turds.

My Chinese might suck but I know exactly what they're saying to each other. Jeremy's trying to tell them to go in - that there is no charge for parking for 2 whole hours. But they're such cheap assholes. The woman walks her dumb ass through the gate meanwhile her husband snarls at us to back up so he can turn around. Now other cars have joined us and are also honking at the cheapskate who won't park in the Metro parking lot. Free for 2 hours. Just so you know, even if you DID shop for over 2 hours, do you know how much it costs per hour after 2 hours? 4 rmb. Yes. 4 measly rmb.

Finally, the Parking Lot Cheapskate turns around and gets out of our way. As Jeremy fumes away while we park, I bug him, "How do you say 'cheapskate' in Chinese? Is it 'pianyi ren'?" 'Pianyi ren' would translate to ' cheap person.' But Jeremy tells me no as we walk into the store.

"Xiao qi gui," he says after he's brought us a cart. It literally translates to 'stingy ghost' and is not something someone wants to be called here. I wanted to say it to that woman if we saw her inside the store. Which we did. But fearing she'd be some psycho, I simply pointed and said, "Hey! It's the Cheapskate Lady!" To which we laughed hysterically. It makes me wonder how many other people turn around at the sight of the parking gate when they go to park at the Metro. Next time, I'll see if Jeremy will ask the parking guard in the name of research!
Posted by JQ at 6:38 AM