Yesterday, I mentioned that I was baking a gluten-free chocolate cake. I bet you're all hanging on the edge of your seats wondering how that hot mess turned out. Yeah, right. Well, for the 2 of you that were actually wondering (and I'm guessing one of those people is Kimmy who actually bought us the gluten-free cake mix), here you go:

I must say that I was really skeptical about how this cake would turn out. For one, the package of the mix had called for a tablespoon of lemon juice which I found highly unusual for a chocolate cake. Still, I followed the recipe precisely. I took a taste of the batter. It was weird, almost like when I used to bake special brownies way back when in my foolish days of yore. But not quite that weird and certainly not with any hallucinogenic effects.

I tried to make some cupcakes but I don't have a muffin tin so they came out looking a bit wonky. Hey, don't laugh. I should have known better but I read a tip on Pinterest that suggested you could make cupcakes take any shape of whatever pan they were in if you grouped them together. Yeah, that doesn't work. Or at least it didn't for me. I'll be bugging my husband for a muffin tin, but until then, go ahead and laugh at these wonktacular things: 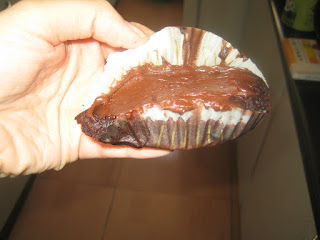 So, I came up with a plan B, and that was to actually just make a whole cake. And that came out much more attractively: 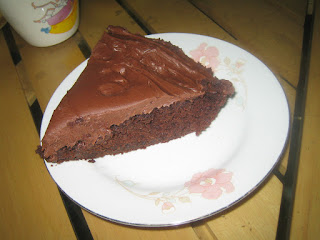 So how did it taste? I have to say, I was pleasantly surprised. Despite the odd taste of the batter, the cake itself baked into an extremely scrumptious dessert. If I didn't know it was gluten-free, I'd be shocked if someone told me after I took a bite of it. It's moist and chocolatey. I'm impressed. And so is Raelynn. I'll end with a picture of her and her chocolate-crusted face, which you'd have to be made of stone to not "SQUEEEE!" when you see her. Enjoy! 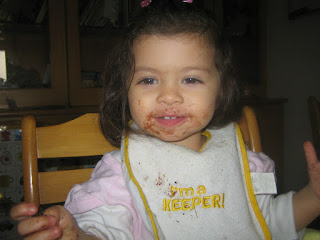