And Now, For Something I Love About China...

I know I do a lot of complaining about China. It IS a difficult place to live in, and I'm saying that as I reside in a large metropolis. At least I'm not out in the sticks somewhere. I don't think I could handle that. AT ALL. There are definitely things that make me nuts about living here, and about the culture too. But there are also quite a few things I find to be wonderful here. One of those things is the excitement and fun of the Chinese New Year holidays. Especially the buzzy feeling just before.

My husband's boss invited us for dinner with some of the other coworkers at a Chinese restaurant near our home. This restaurant is probably one of my favorite Chinese restaurants here in Qingdao. Bei Da Huang Ren. It's a hotel restaurant...the kind of hotel Chinese people are happy to stay at but foreigners like us probably wouldn't be comfortable there. The restaurant is awesome though and it is always packed. But because Chinese New Year is almost here, it was even more busy than usual. Normally, that would annoy the crap out of me, but because of the approaching holiday, it seemed to add to the ambiance. 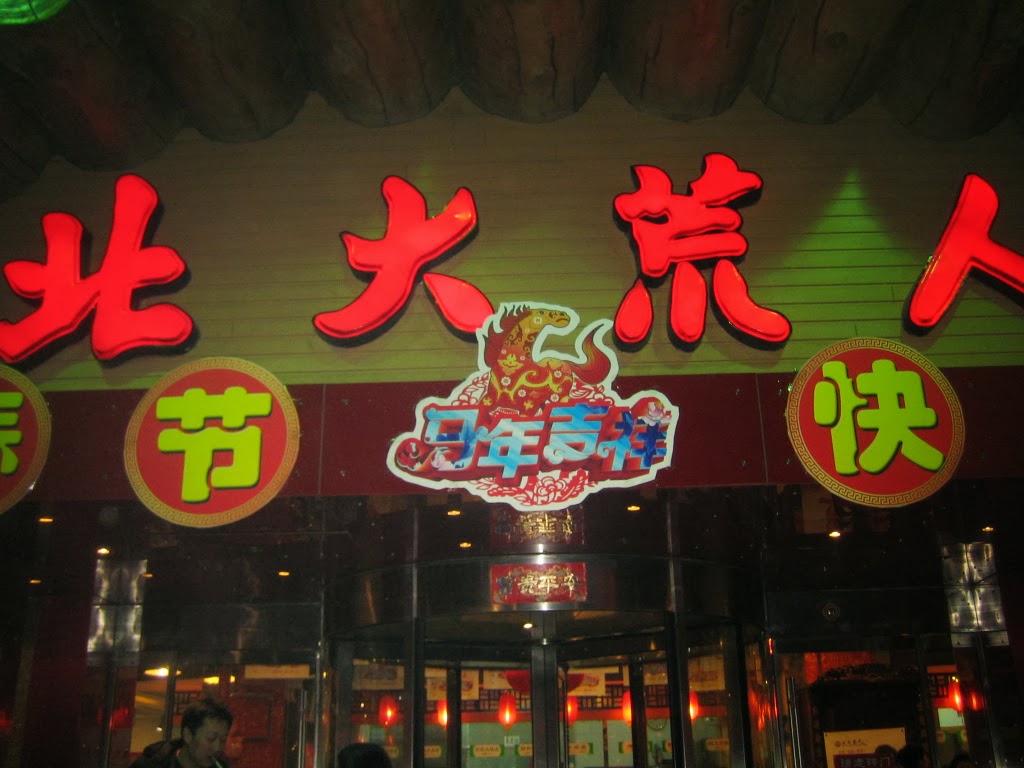 The food at this restaurant makes me happy to eat Chinese food. I was a little worried this time though since, being invited as someone's guests, we were at their mercy for whatever they ordered. They did a great job though, mostly. While I was bummed that no one ordered their fall-off-the-bone ribs or this other thing I like that comes with thin pancakes and meat and green onions to stuff it in, I was still quite content. 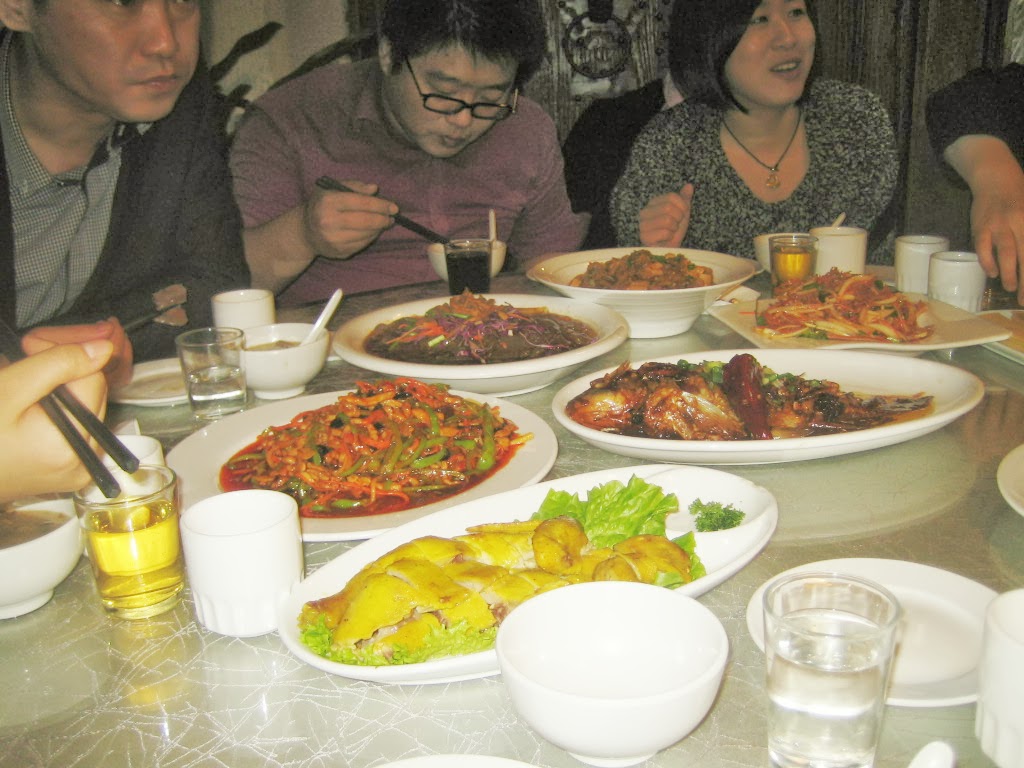 There are 5 dishes on the table. THIS is why Chinese meals can be lots of fun, provided the food, and company is good. That's a scary chicken closest to me, complete with head. It soon got moved away from me, thankfully. Behind it to the left is a pork dish I like. I am always forgetting the name of it. As a matter of fact, I just had to ask Jeremy AGAIN what it's called. He responded with narrowed eyes and a heavy sigh and impatiently told me: yu xiang rou si. Aha! Of course! Watch, I'll forget again. It's just how I roll.

Behind that is la pi, one of my favorites. I was surprised to see it here. We've had it at this restaurant before but what surprised me is that it is typically served in the summer. In the back, there is a bowl of some gloppy thing that I was happy stayed on the other side of the table. Next to that, there's a bright and happy-looking dish. I wanted to try it, until I took a closer look. Do you know what it is? It's fried fish spines. No fucking joke, and no fucking thank you. And finally, a big whole steamed fish, with spine intact. 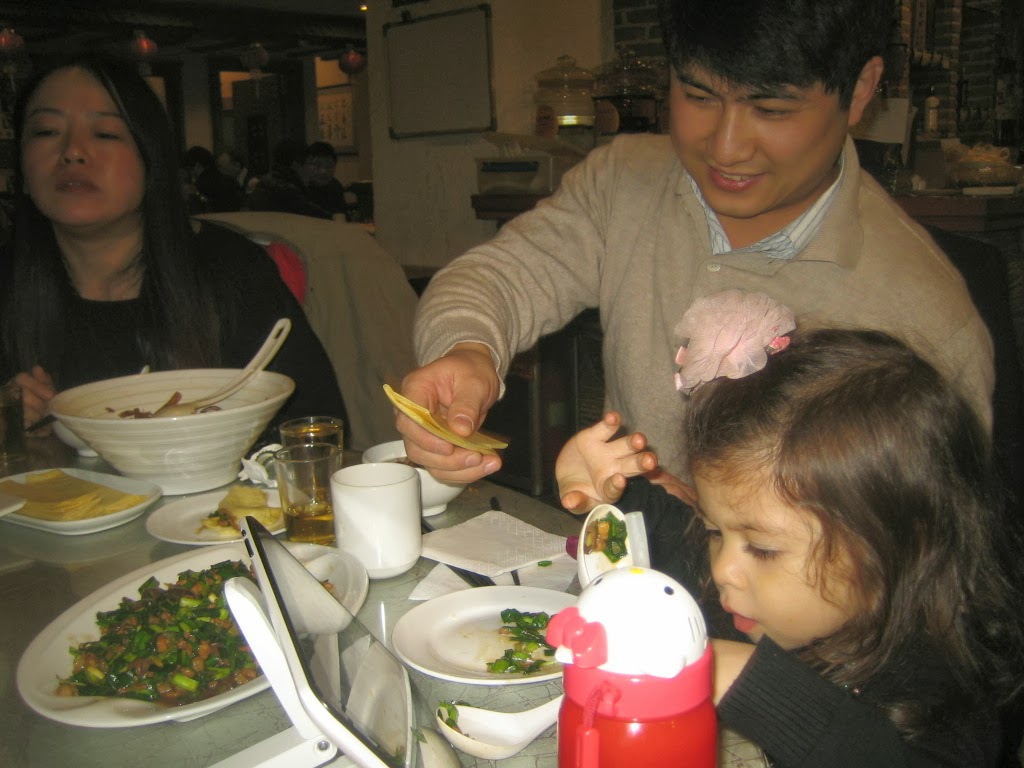 Jeremy serves Raelynn a pancake thing which they ordered with that green dish you see in front of her. I would have been all about that, except for the meat in the dish was stomach and intestine parts. Gak! 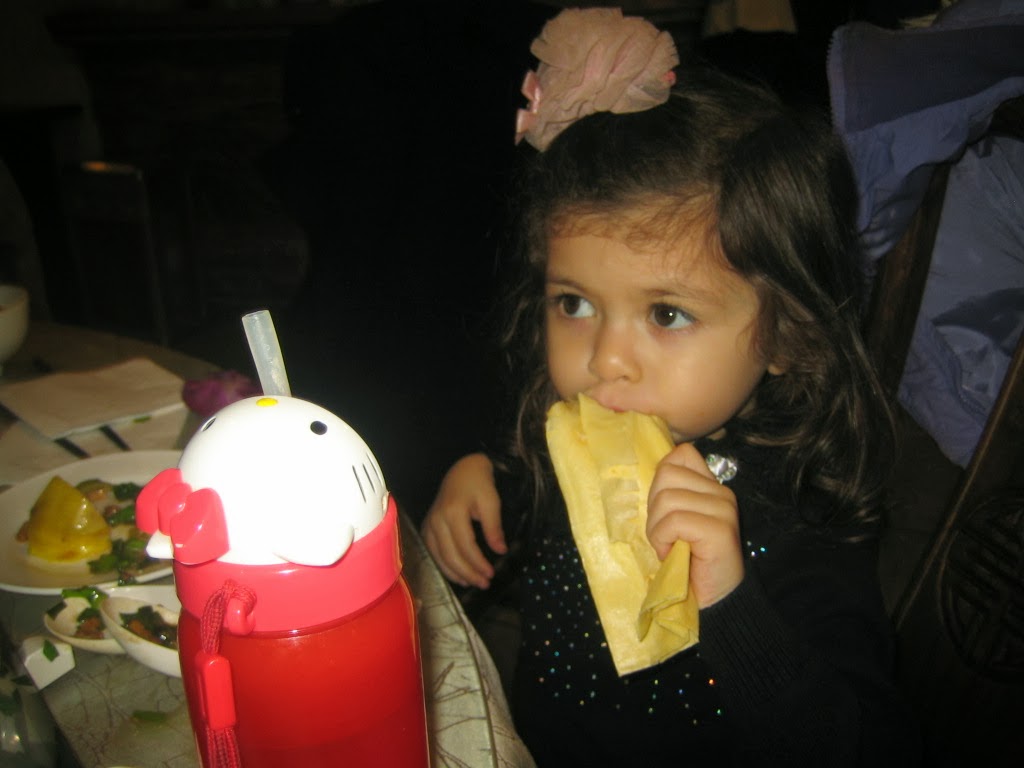 We brought the iPad to keep her busy. I was so worried because normally, we get a table in a private room so we don't have to worry about her running off from the table. But she was such a good girl during this meal! 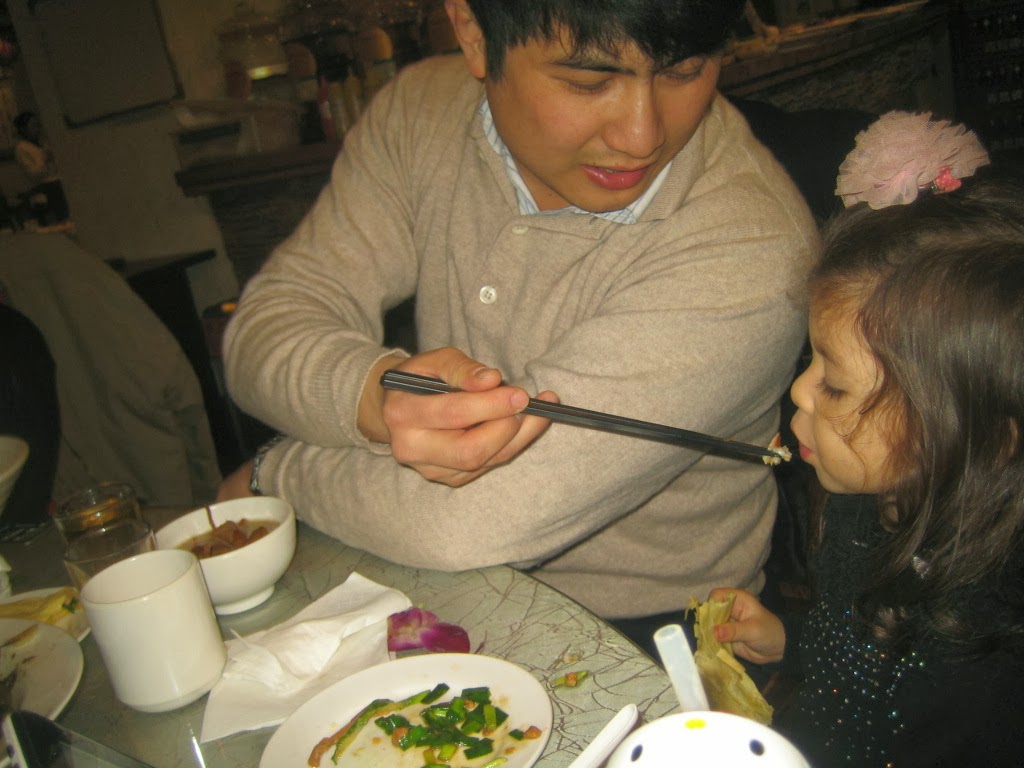 Jeremy serves Raelynn some fish. He loves fish and so does she. I do too, but my husband is quite skilled at making sure to remove all bones before letting our daughter have a bite. He will soon be VERY busy when this next baby starts eating solids! 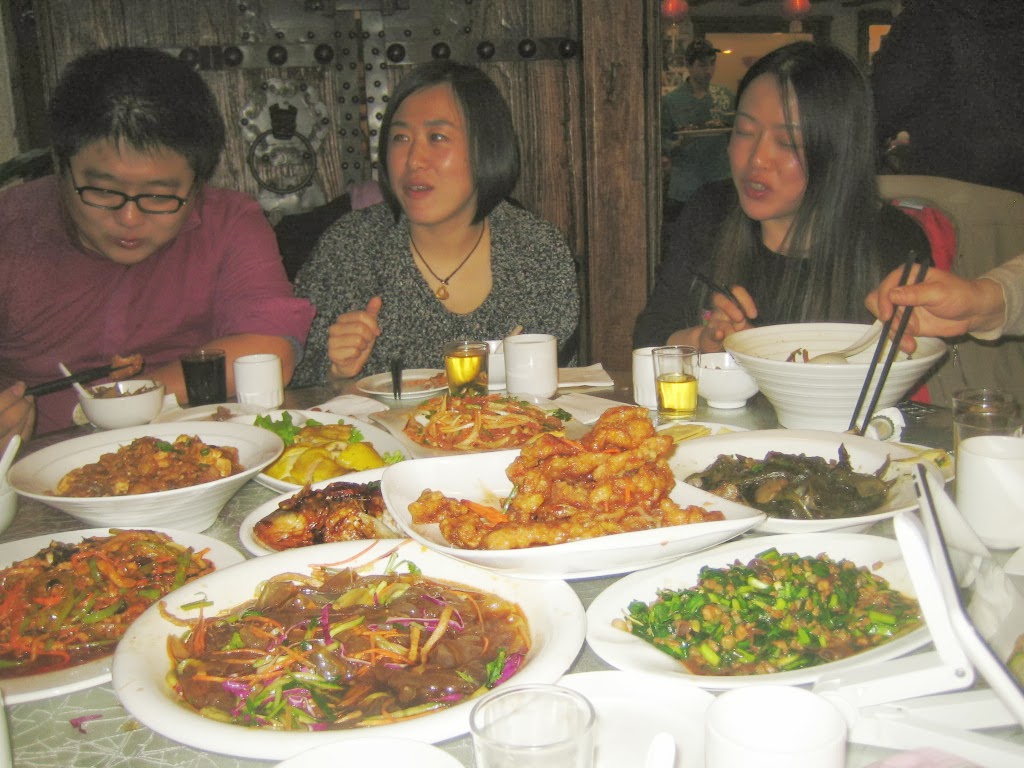 Here are some of Jeremy's coworkers, surrounded by MORE food. Yes, there is even more food on the table now. They've moved the la pi closer to me (it's a cold noodle dish, incidentally, and if you ever have the chance to try it, do so!). There is a crispy honey fried pork in the center that was fantastic. Many restaurants here serve this kind of dish but so few do it so well. Closest to the woman on the right is a big bowl of some sort of beef soup. She offered it to me and I had to smile and say OK because in Chinese culture, when someone offers you a taste of a dish, unless you are deathly allergic, you should not refuse it because it would be considered rude. I made sure to take a few slurps but I didn't finish my bowl of it. It wasn't horrible, but it wasn't what I wanted either. In front of that is some weird mushy thing. I asked Jeremy what it was and he told me "kidneys." Um, no. Thank you. He then said it was a vegetable. So either he's got his words mixed up again or there's something gross there. I just couldn't bring myself to try it. Hey, remember, I get a pass on that kind of shit now since I'm pregnant. 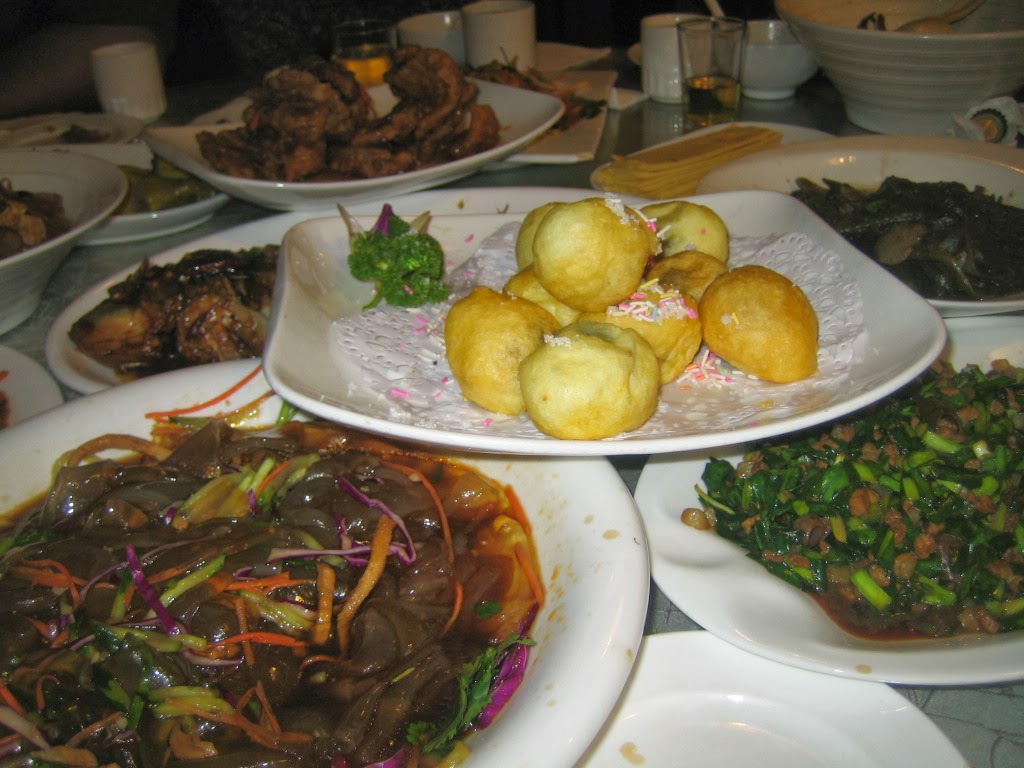 And yes, even more food has arrived on our table! I've officially lost count of the dishes. This fried ball thing with sprinkles is filled with red bean paste. Which I don't usually mind, but it's not as sweet as Americans typically like. Still, they offered it to me so I had to smile and try it. And these were awesome. They had ordered them for Raeynn. She ate 5 of them herself! 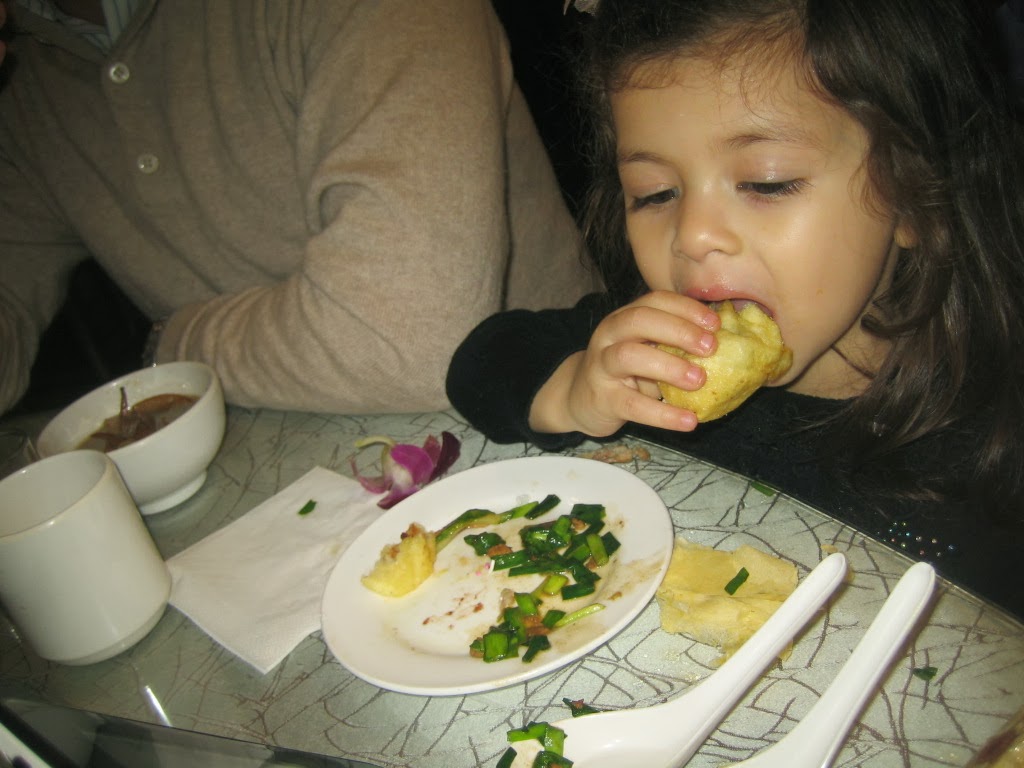 Here she is, watching Dora while biting into another fried red bean paste ball. 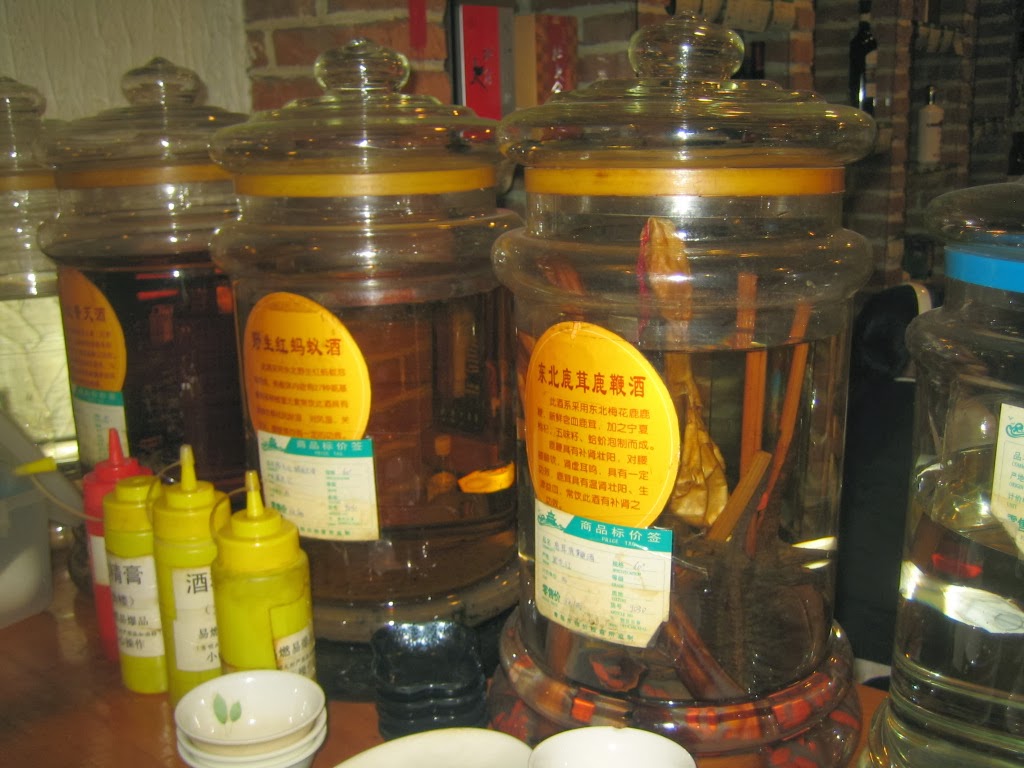 Near our table, these large jars on the bar caught my eye. I figured they were some kind of alcohol, and I apparently guessed right. But there is much more to this than meets the eye. There's something inside these containers. What is it, you ask? Well, here is what Jeremy told me...

Are you ready for this?
You sure?
They put lots of bai jiu, the Chinese liquor, inside big containers like these along with lizards or snakes. Apparently in Chinese medicine, it is believed that drinking bai jiu that has had one of these creatures marinating in there with it will restore bad health, and for men, will correct erectile dysfunction. Take that, Viagra! So yeah, you're looking at dead reptilians floating in a sea of bai jiu. Please add this to my list of things I will not be trying while in China. 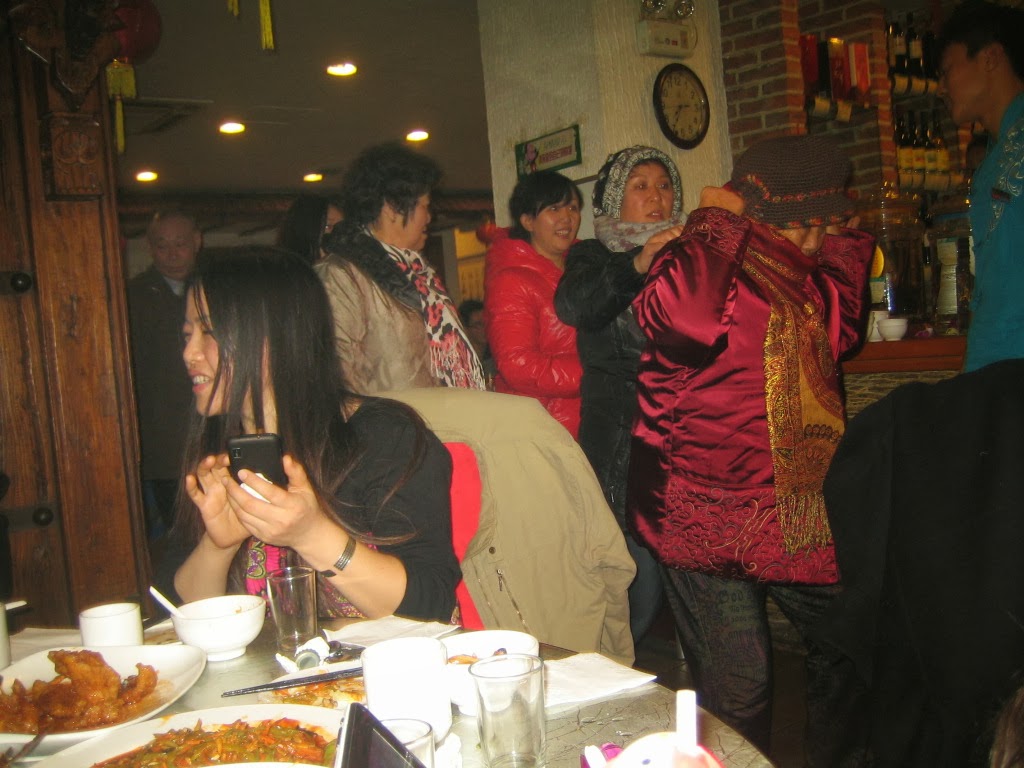 Jeremy's coworker has just used her phone to snap some photos of Raelynn being cute and I'm using the opportunity to capture the herd of older people leaving the restaurant. Check out the scarves on them! Incidentally, none of my husband's coworkers or his boss' girlfriend had on an old lady floral print scarf. No one in the restaurant did, as far as I could tell, but there were plenty of fashion victims, as usual. 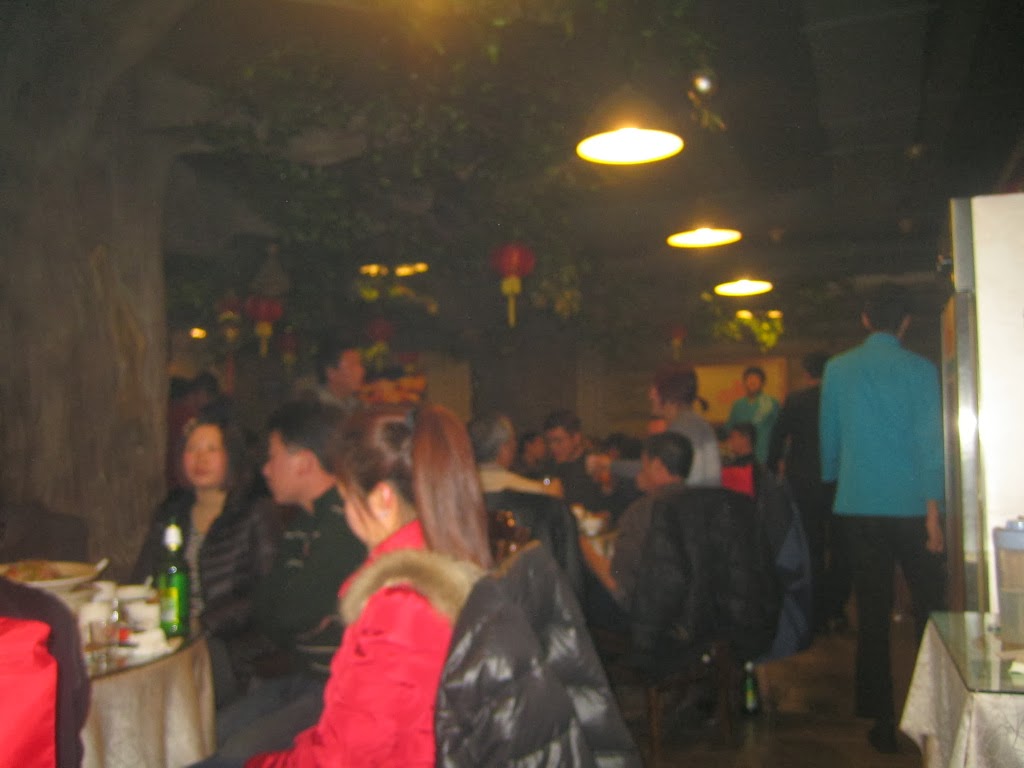 Speaking of the people in the restaurant, this is just behind our table. This restaurant is huge. It has 2 floors and we were seated on the bottom floor where most of the private rooms are. There was a huge one right by our table and we could hear tons of happy revelers in there, dining and toasting. In fact, all these people here in this photo were cheering, drinking and clinking their glasses at a constant rate. And THIS is another reason I do love this time of year here. It is so festive, so happy and so fun. It made me a little wistful that I couldn't be chugging beers with everyone. I took a tiny sip of beer though and it tasted awful to me. Oddly, Jeremy's boss doesn't like drinking. It's unusual for a Chinese man, especially one that smokes. He was drinking Sprite so I happily joined him with that.

And that's another thing...I found my husband's boss to be extremely considerate. He's a smoker, and the whole damn restaurant is filled with people smoking. On the way to the bathroom, I passed a table where a man was holding a child no more than one year old and smoking while doing so! But Jeremy's boss did not light up once at our table. It's extremely uncommon. I've had to ask people we've been dining with to please not smoke in the same room as our child, so it was a breathe of fresh air, pardon the pun. 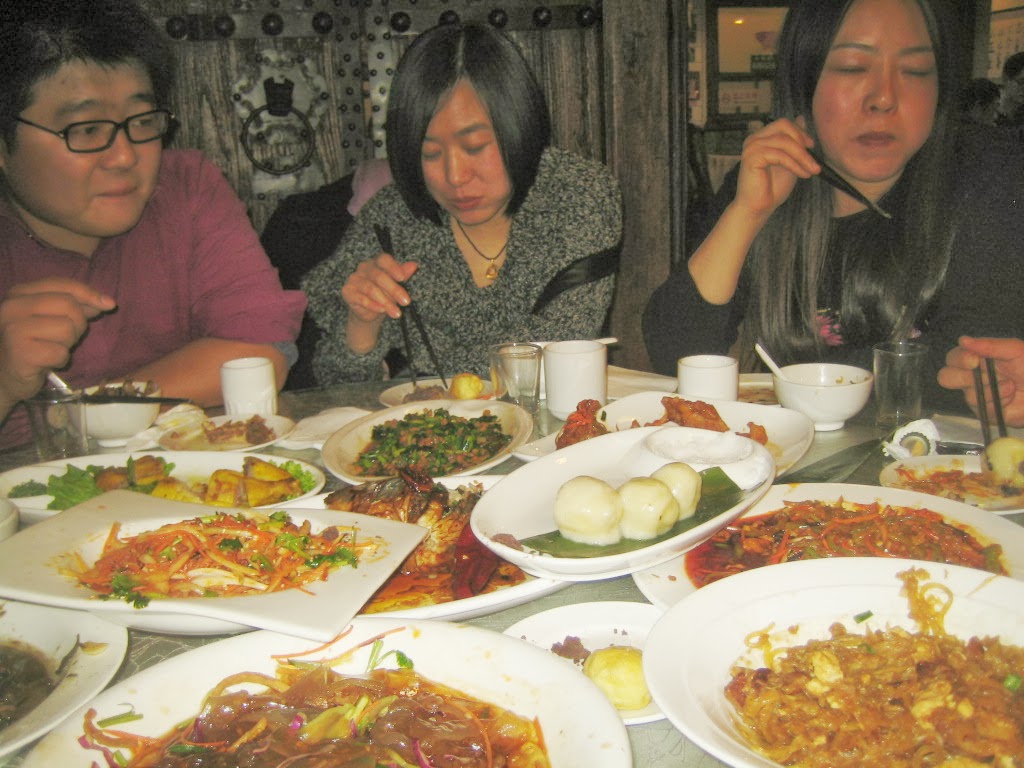 I had stopped eating eons ago, but these 2 ladies ordered one final thing for the table. Here are red bean paste balls, not fried. With a side of sugar for dipping. I was asked by one of the coworkers to try one but it was not even close to as good as the fried ones. Do you see how much food is still on the table? This is very typical when dining with Chinese people. Most of the time, they will not take anything home either. Jeremy once explained it to me that because the people of China had been poor for many years, now that there has been so much growth, people order more and more to show they CAN afford lots of food and do not have to starve. It's interesting given my American culture, where we go out to eat and happily take home the leftovers. No one thinks anything of you for doing so. But here in China, Jeremy says people are afraid to take home leftovers because they don't want people to think they are poor and can't afford more food. What a weird way to look at it!

Jeremy has learned to be less worried about that, now that he's married to that American perspective. It seems sillier to me to waste good food because you fear what a room full of strangers might think of you for taking it home.

OK, so maybe that last bit was a complaint, but it sure is nice to talk about something that makes living in China seem very charming. Here's to our upcoming Year of the Horse and all the festivities it will bring!