Sexism And The City

There are just 2 days until it's my second blogiversary. It was a great day to start my blog because it was Mom's birthday (not to confuse you too horribly, but I have 2 moms - one that gave birth to me and I was lucky to know for 9 years and another that came into our lives when I was a surly teenager and loved me anyway - and right now, I am speaking of my first mom). If she were alive today, she might not be happy with some of the things I'd write but I'm quite sure she'd respect my right to write them. This post that follows is for her, and my other mom too. Because both of them would definitely back me up on this.

On the way to work the other day, I noticed that outside the Shine City Mall (isn't that the best fucking name for a mall???) by our house, they had draped a large banner over the side, advertising for a place called Be You World. What is that, you ask? It's a play park for children where they can try out different careers, much like that Wannado City at the Sawgrass Mills Mall back home that apparently closed. That sucks. I remember when my friend Aaron and I were at the Sawgrass Mills Mall and wanted to go in there and they wouldn't let us. They said we needed to have a child with us and we were SO disappointed and briefly contemplated borrowing someone's snotty sticky-apple-juice-hands kid. But anyway, there's something like that here now and I will likely get to go check it out in the next semester when we take the children for a field trip. Aaron is jealous as he's reading this...I just know it!

But the more I look at this giant banner strapped down to the side of the mall, the more annoyed I become. Take a look: 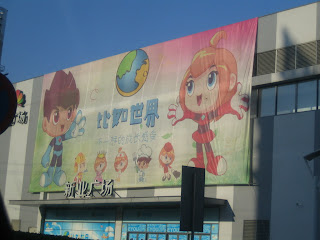 The first thing that bothered me was that these 2 cartoon character children HAVE NO NOSES. I repeat: they have no noses! Second, in the smaller pictures, the graphic artist who designed this continues on a trend of laziness after leaving off noses to use the very same pose of the girl with the major cowlick for 2 of the 3 pictures of her.

But as irksome as those things are, there's one very large issue lurking on the side of this mall here: the issue of sexism. Now, if you know me, you know I'm not a feminist. And I'm not against feminists either. I'm quite grateful for the many women who stood up (and continue to stand up) for our rights. And I'm also not against women who would rather stay home and do what some people classify pathetically as "women's work" because that IS work and it's hard work. But I think women should have a choice on the matter. If you want to stay home and take care of the kids and the house and your family won't starve on one income, by all means, go for it. And if you want to be out in the work force earning your fair share and being compensated properly for it, you go girl too.

And thus, I come to my point. Aside from the stupid space-kid outfits the larger versions of the boy and girl don, look at what the girl is wearing in the smaller pictures. A stewardess uniform. A nurse's uniform. AND A FUCKING PRINCESS. Don't get me wrong on this either - if girls want to play "princess" I think it's beautiful and wonderful, even though I'm quite sure princesses don't do the things we suppose they do like sit around waiting in the tallest tower for the handsome prince to come and kiss her for a happily ever after. I mean, look at that Princess of Monaco. Come to think of it, she never really looks very happy, does she? Anyway, I find it appalling that this is a so-called career choice at this facility. Why, instead of using this experience to be a teacher, a doctor, a pilot, a police officer or any other actual career, you can just have your child dress up as a princess and stand around. I think for Disney World, that's perfect. It's the place fairy tales are made from. But if the whole point of this Be You World experience is to try out different careers, then I think that having "princess" as an option is missing the boat entirely.

There is nothing wrong with being a nurse or a stewardess, but I find it insulting that the girl character is shown doing these things. The boy is dressed as a firefighter and a chef. How typical! But what about this girl? She can't be a doctor or the pilot of the plane if she wishes? I remember very well when I was in first grade. My teacher had asked us what we all wanted to be when we grew up. Back then, I changed my career choice every other day. I had wanted to be a vet. Then a matador (which I practiced using a red towel on our dachshund, Snoopy). I think maybe I wanted to be Iron Maiden's mascot, or in Iron Maiden itself. Or was it Van Halen? I don't remember. But anyway, I do remember that at this point in time, I wanted to be a doctor, just like my daddy. And I told my teacher so. I will never forget what she said to me. Ever. "You can't be a doctor. You're a girl. You have to be a nurse." No fucking joke. She said this to me. Naturally, I repeated this crap to my mom when I got home and she gave the teacher a piece of her mind. I remember Mom telling me to forget what my teacher had said because it wasn't true. She (and my dad and brother, and my other mom too once she came onto the scene) always told me I could be anything I wanted to be.

The thing about that is that you CAN be anything you want to be, most of the time. But there's still the old white boys club mentality out there. It was alive and well at my old advertising job. America claims to be a free country yet there are so many inequalities, it's ridiculous. Women have rights but we're paid less than men on the same level as us. And if a woman breastfeeds in public in America, bring out the stones. Seriously, sometimes I am actually relieved I live in crazy China.

China is not a free country. Le duh. But here, you do see some women doing what would be classified all over as "men's work." Many families are poor so they take what they can get, even if it's a hard construction job. There are plenty of women bus drivers and taxi drivers too. And the whole staff that helped me deliver Raelynn? Women. But yet, our society and China's too, are very similar in that we (and they), despite having no restrictions on what jobs you can do as a male or female, have these antiquated portrayals of what roles we SHOULD serve in this world.