In my last post, I mentioned that I'd suffered over 5 hours of being bored shitless at my in-laws' house for New Year's Day. See, New Year's Day is also my father-in-law's birthday. My husband and I offered to take Baba out for lunch. I was happy to pay for whatever he would want to eat. I was even willing to bake a cake. Oh but no. The most boring people alive wanted to stay in their crusty home with the outhouse-esque bathroom and eat there. Oh boy!

There was no need for us to bring a cake. I tried but was shut down. My FIL's old company sent him a cake. A Chinese cake. And to me at least, it's not really cake. Chinese people should just stop making cakes. Stick to the little pastries they make and dan tat (see my husband's first and second attempt at making dan tat here and here) and quit ruining cakes. Chinese cake LOOKS like a normal cake. Only it tastes like they forgot to put sugar in it. So it's an absolute waste of calories. Lane's parents are indeed odd as they served the cake first. They tried to give some to the baby and thankfully, my husband ordered them not to. Raelynn will have cake alright. On her first birthday. And a real cake that Mommy bakes just for her. Not some vile lump of flour with bland frosting on top. Not for my little princess!

Next up, an array of food that was just ok. I was forced to eat it to be polite. Thankfully, Lane didn't force me to eat things I cannot stand. I stuck with things that I like but even those were hard to eat because things that should have been served hot, or warm at the very least, were cold. And so began my torture. Thankfully, there was beer. But drinking a lot of it meant visiting their deplorable bathroom. Take a look: 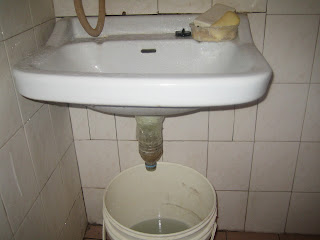 This is the bathroom sink. Check out the plumbing if you will. That's right. What you see is an old plastic bottle of some kind serving as a half pipe that drops all the water from the sink into the bucket below it. I want to remind all of you that my in-laws are not poor. They aren't the wealthiest people either but they CAN easily afford to fix this. Hell, I might have my husband send someone over just because this is so wrong. I can understand being frugal and not going out to eat all the time (or never, which is what they do) but this is insane. And they spend money on stupid things too, like overpriced and ugly jewelry for the baby but they won't spend money when it's necessary to fix something. 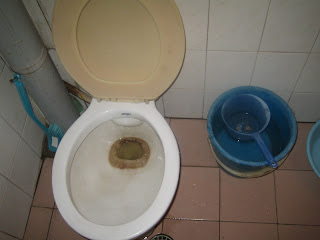 I am willing to bet that this toilet, if you can even call it one, has never seen a cleaning product. Not even once. It doesn't even flush either. There is no flusher. There is no tank! You can see that for yourself in the next photo. See the bucket of water with the scooper in it? Yeah, you take some water and throw it down the toilet to flush it. It truly is one step up from an outhouse, isn't it? 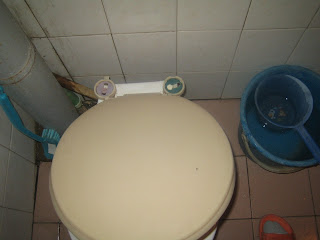 Here, you can plainly see there is no tank for the toilet, or flusher for that matter. I have no earthly idea why anyone would be so cheap regarding something so important, but there you have it. I find it unsanitary and disgusting. I don't like my in-laws, as you probably well know, but I don't even think they deserve to live in this sort of condition. And the kicker is THEY DON'T HAVE TO! They have plenty of money to fix this hot mess. MIL will BRAG to Lane and ask him to tell me that the lamb she's serving me is 1,000 yuan (which is VERY expensive to most Chinese people) because it is specially cared for up on the Laoshan Mountain. I'm betting this poor lamb was just hit by someone's truck and they saw a fool when they met MIL. I've had much cheaper lamb that was much better and not chewy, thankyouverymuch. She'll brag about the ugly clothes she overpaid dearly for that she bought our daughter (wait until you see the latest crap...that will be coming in the next post very soon) but she won't even fathom the thought of spending the money to make her bathroom work right and it would cost LESS than all those things I just mentioned! AUGH!

Anyway, trying to suppress the urge to strangle MIL with my bare hands was definitely difficult. Say something nice. Something nice something nice something nice. Oh! I know! She did get the baby to nap. So there you go. Well, while my husband felt it necessary to prolong my agony, I needed to do something to keep from completely losing what is left of my mind at present. So I diverted my attention to the howling from the television. Lane and I have satellite which provides us with many quality channels. Otherwise, we'd always be subjected to the kind of boring crap we're forced to watch when we go to his parents' home. Even my husband will tell you that Chinese television is incredibly boring stuff. Watching it makes you feel like you've fallen into a time capsule. It is so antiquated that it would be fascinating, and on some levels it is, if not for how annoying it is.

If you need an example, please check out the following photos I snapped of the TV while my in-laws had it tuned to some ghastly New Year's extravaganza. It looks like a dinner party on a senior citizens' cruise. I was surprised to find out this was for New Year's since I can swear to you, they have shitty programming like this craptacular hell on ALL the time here. No fucking joke. Here we go: 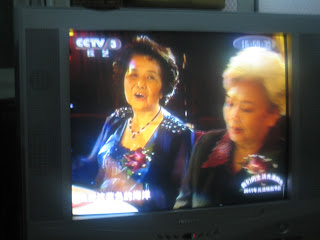 Check out these audience members watching this grand spectacle! Dare I say they look like a spectacle themselves? The hair! The clothes! It's like the Grand Ole Opry was swallowed into a sink hole and came out erupting through some Chinese nursing home. 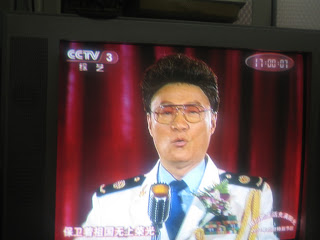 Wow. Just. WOW. Look at that crazy suit! He definitely looks like he's supposed to freshen your towels on the cruise to hell all the while singing and serenading your grandma. Look at that hair too. Or maybe he's a cast-off from another round of let's-remake-The-Love-Boat-again and is the token Asian person. Maybe! 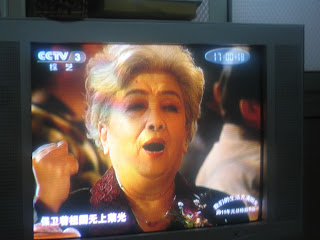 This crazy old lady must be screaming for more of that Asian Love Boat reject! 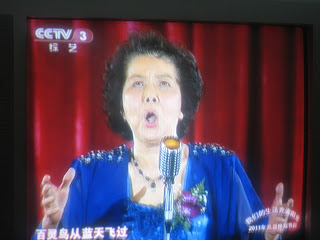 Her singing was just awful. What could be worse? MIL sang along to it and her singing is like listening to a medley of lobsters being boiled alive coupled with innocent animals being skinned and slaughtered. I jammed my fingers into my ears. If only you could switch on and off your hearing like with hearing aids! 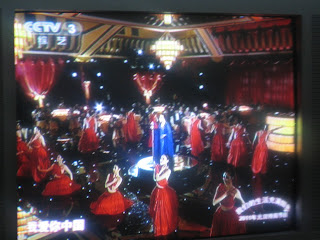 A wide shot of this insanity. 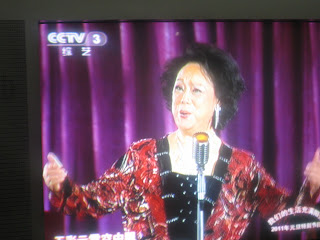 Another fashion victim who should have been gagged before coming onto stage. Again, MIL sang along too and it was like what I imagine hell must be. 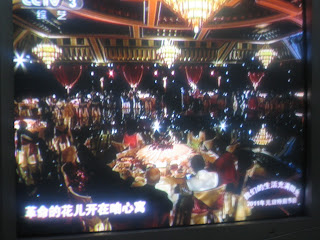 See? It has that whole cruise ship dinner ambience to it. 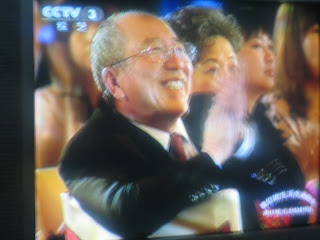 This guy is loving his cheesy dinner and a show. 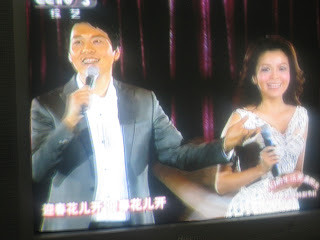 These two weren't too terrible. But like a wolf to the moon, MIL began causing my eardrums to overload and implode. Ugh. 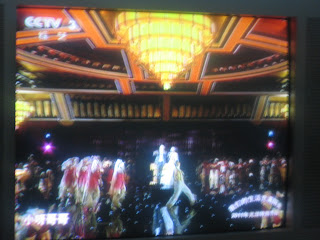 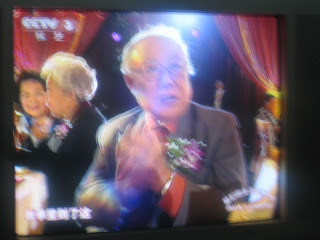 I think this is the same audience member from the other shot. Maybe he's someone important? I don't know. He is just so beyond excited to be at this crapfest. Good for him! 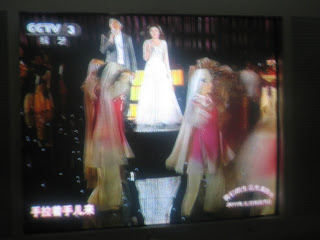 Here are some dancers on the stage to go with this duet. 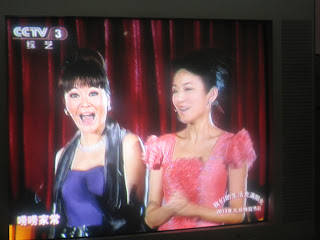 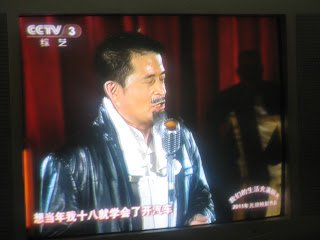 And then, there's this guy. Check him out. His mustache and goatee are fake! In a few photos, you'll see he's removed them. I should also add that he was sweating so profusely, they had someone come mop up his face with a towel! 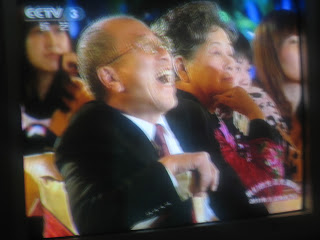 And here is the sweaty guy who removed his fake mustache and goatee. I don't know if it was part of his act or due to his excessive sweating but whatever the case, it was my only source of entertainment while trapped at my in-laws' home on the outskirts of hell.
Posted by JQ at 10:03 PM