Happy New Year! How did you spend your New Year's Eve and New Year's Day? Hopefully, you enjoyed yours more than I did. I spent the eve putting a fussy baby to sleep and barely even finished my beer before nodding off while feeding Raelynn. Then she awoke just before midnight too and wouldn't go back to sleep again. And I spent the day stuck at my in-laws' house because it is my father-in-law's birthday as well. The sheer torture I endured for over 5 hours of my life is not wished upon a soul. But that story is for another time and I promise I will write about that very soon.

This post is about things that made my 2011 special. Here's a look back at the best things that happened to me: 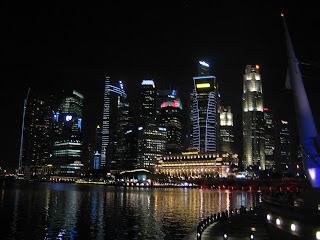 In January of 2011, I went to Singapore to visit my brother, his awesome girlfriend Kimmy, and our parents who had also flown over. I loved Singapore. It was beautiful and it was easy to get around. The weather sucks though. I truly hated that, perhaps even more so because I was 7 months pregnant at the time and my ankles swelled up so much they didn't reappear until I'd been back in Qingdao for 3 days. My parents had brought so much stuff for the baby that Phillip and Kimmy had to ship it to me. I had asked them if they found my ankles to please throw those into the box as well. I also got to see an old friend from high school who happens to live out there with his wife and children. The other sucky thing besides the weather was that Lane couldn't get his visa for Singapore in time so I had to go without him. I had an amazing time, but it would have been even better with him! 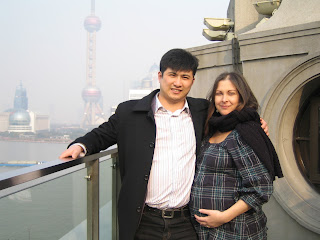 Enormously pregnant me and Lane stand on the Bund with all the famous Shanghai buildings in the skyline behind us.

In February of 2011, my husband took me on a mini-honeymoon. We only married at the US Embassy in Seoul. We have not yet had a big ceremony or taken beautiful professional photos which we would love to do. We still want to do those things AND have a real honeymoon, but our mini one to Shanghai was an outstanding way to have one last trip together before we had our baby. 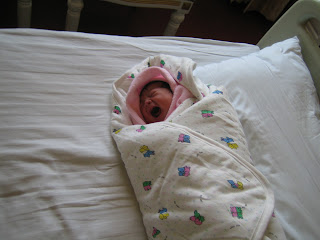 The first photo ever taken of Raelynn very shortly after she was born on April 16, 2011 at 11:28am.
In April of 2011, the absolute highlight of our year of course was the birth of our beautiful daughter, Raelynn. This is without a doubt the most priceless memory of the year, if not my whole life. And then, at the end of the month and into early May, my brother came to visit me here and meet his little niece for the very first time. I needed him to be here. I was so happy to have someone from my side of the family around to help me keep sane. Thanks again, Phillip! I love you! 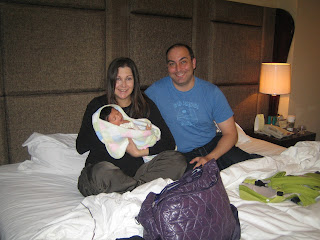 My big brother Phillip is happy to be an uncle! 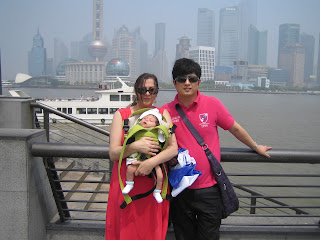 Back in Shanghai again, this time with Raelynn outside of my uterus.

In May of 2011, just after my brother went back to Singapore, Lane and I took Raelynn to Shanghai to register her as a US Citizen. It took FOREVER for that passport to come out. We are so thankful to our friend Cherie for letting us stay with her. Thank you, Cherie! We also thoroughly enjoyed getting a chance to see Shanghai again. 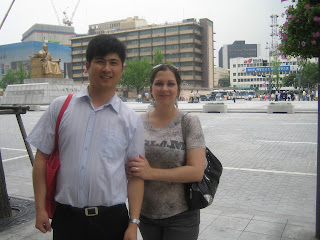 Lane and I in Seoul, standing in front of the US Embassy, where we got married in September of 2010.

In June of 2011, at the end of the month, my husband and I had to fly to Seoul. All I'd wanted to do since we moved to China was go back to Korea. But because China is a big meanie, they wouldn't let us take Raelynn in and out of the country, we had to leave her with the village idiots which made the trip quite difficult for me. Plus, it was my 35th birthday. It was nice to see some old friends though while we validated our marriage certificate. At least China accepts our marriage now. 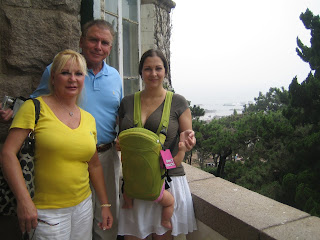 Mom, Dad, Raelynn and me at a castle by the sea in horribly humid summer weather.
In August of 2011, my parents came to visit us. It was their first time meeting Lane and the first time meeting their first grandchild. It was one of my favorite moments of 2011. I love you Mom and Dad! I can't wait until you come back!

August was also the same month I started teaching kindergarten at the Korean school. I have to say I've mostly found it to be a rewarding experience, despite that the school can be a little disorganized at times. It was an especially enriching experience just a few days ago at the end of December when my class graduated. I'd been forced to make them perform a song and dance. It was really challenging to teach them to sing AND dance while instructing them in English. Some of them just don't understand directions, no matter how simple (and no matter which language you use). But they managed to pull it together and did it perfectly on graduation day. They did so well that my boss complimented me on it. And with that final moment, I realized this year indeed was a happy and successful one. Here is hoping that 2012 brings us even more joy and accomplishment! 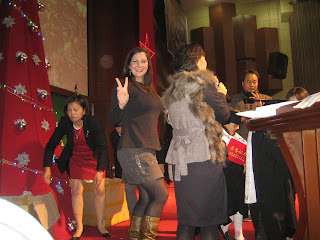 Announcing for my kindergarteners on stage at graduation. It was really special to be part of that moment for them. 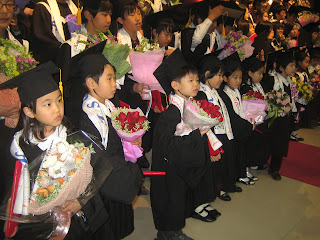 My little graduates! Congratulations guys!
Posted by JQ at 5:37 PM