Buffoon At The Buffet 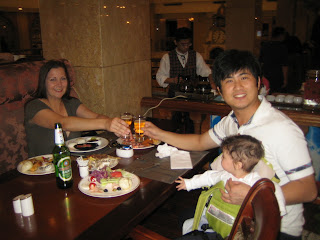 Our little family celebrates a wonderful week off. As we clink our glasses, I hope the free beer keeps coming to help erase the  memory of what I just saw. Keep reading to find out what that was.

Thanks to yet another Chinese holiday, which is definitely the plus-side of living here, I've had off work all week long. It's been absolutely fantastic. This whole week, I have savored every second of time with Lane and the baby. And no MIL! Lane had told her not to come this week so I could spend all my time with Raelynn without interruption or annoyance.

It's not always easy in these parts to get out and do things with a baby that will be turning 6 months old next week (can you even believe it?!?). Our activities are limited to brief trips to restaurants, shopping malls and parks, and those sort of things. Still, we can't always sit in the house. Raelynn needs to see the world outside these walls and it's up to us to show her. Even Lane won't allow his mother to take Raelynn out anywhere. Because he knows as well as I do that she won't even think of stopping other village people like her from touching the baby with their filthy fingers.

Lane had offered to take us on a trip, but I know him. No matter how much money we could possibly get coming in, he never thinks it is enough and he complains that we must save more. I love my husband dearly, but I'm not a fan of the "save money" speech. So I told him that I'd rather us stay here in Qingdao for the holiday, even though it would have been awesome to go check out Beijing or another city. I figured we've got plenty of time for that. Besides, taking Raelynn on a trip is a trip in itself. We already took her to Shanghai and that was before she could roll over. Now we're on high alert, waiting for her to begin crawling. Until she does, we're plenty busy keeping her from rolling off of things and stopping her from eating socks, toys, blankets, chairs and anything that isn't nailed down.

And so, we filled our week off with drinking beer by the sea, eating squid on a stick, shopping, playing in the park, sleeping in until 7am instead of 6am, going to coffeehouses, meeting a friend for lunch and dining out at restaurants instead of cooking at home. One such restaurant was the buffet restaurant in the Grand Regency hotel. It's a nice hotel. My brother stayed there when Raelynn was first born. But it is not as nice as the Shangri-La. Nothing is. I am a fan of buffets. That is, until I think about all the other buffoons dining there. People who don't wash their hands after using the toilets. People who have a cold or the flu touching the same serving utensils as me. People I don't know touching food I'm about to consume. This bothered me a great deal in America if I thought about it too much.

Now, I began to think about it too much HERE. Oh. Dear. GOD! Can I bring my own utensils? Not wanting to spoil the night or upset my husband since the cost wasn't cheap, I scanned the offerings for things that would be less likely to have been defiled with germs by the general masses. True that the price of the buffet would keep out dirty folks like the sort we'd see at the market, just as in America, however, a higher price doesn't mean that people will wash their hands. I was relieved to see that a sashimi station was set up with an employee wearing sanitary plastic gloves slicing the fish right in the open. Score for me since I adore sashimi. Then I turned my attention to the other large tables surrounding the dining area. Some things seemed safe and others made me a little afraid.

But nothing could prepare me for the scary soup encounter. As I started heading back to our table, I noticed 4 cauldrons of soup. I moved closer to read the labels and see if perhaps it was something I'd deem delicious. Before I could even read those labels though, all the soup was ruined for me. What I saw was so alarming and may have just frightened me away from buffets forever. I saw a very hideous middle-aged Chinese man, likely drunk, TASTING the soup with the SERVING SPOON! Let me repeat: he was using the serving spoon that everyone is to use to ladle soup into their bowls to taste the soup!!! Oh wo de tian ne (that's "oh my God" in Chinese)!

Quickly, I retreated to the table where Lane was having a time of trying to get Raelynn to sit still. I gladly took our fussy-faced date from him and recounted the horrifying tale of the man sipping from the soup serving spoon. For the rest of our meal, my husband was kind enough to bring back food for me. Plying me with free beer, it was better this way, lest I see some other atrocity. I stuck with the sashimi, eating an amount that would certainly justify the cost of the buffet. The desserts were also safe too. Chinese people eat very strange things for dessert. They have cakes filled with red bean paste and other chalky items. It's not bad, but, well, it's not like they are known for desserts, now are they? Look at Chinese restaurants in the states. What kind of dessert do you get there? Fortune cookies, which I have yet to actually see here in China, and ice cream. That's how it is in Chinese restaurants in China too. There was a big ice cream freezer and all the Chinese patrons were constantly surrounding it. Even my husband went for the ice cream (which was sorely disappointing, he'd been sad to say, after taking a taste of each flavor). I went for the Western-style desserts which were in abundance because people here think we're crazy for liking these things. They think it's too sweet. I say MORE FOR ME. That's right. Take your weird, tasteless rice crap and shove it. I'll take my chocolate cake with a side of chocolate pie and cream puffs and then top it all off with liquid deliciousness in the form of chocolate from a chocolate fountain. And then, I'll go back for seconds. And thirds. And you know what? Maybe, just maybe, next time I will stick my hands in the chocolate fountain, or better yet, just open my mouth and shove my face in there. Hey, if you can't beat 'em, join 'em.
Posted by JQ at 2:55 AM