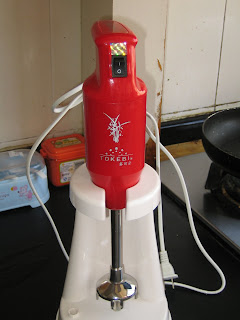 Now presenting the newest member of our family…the stupid stick!  Oh, and you thought we were going to announce the baby! Ha! Not just yet!

We call it the stupid stick because the Korean name for the product is very similar to the Korean word for “stupid” which is pronounced “babo” or “pabo” depending on who you ask. We took to calling it the stupid stick.My husband and I totally had to have this thing when we saw it on one of the Chinese home shopping channels. We were completely mesmerized by the infomercial. He could of course understand every word. As for me, I was just captivated by the demonstrations. Knowing that time will fly after the baby arrives and we’d soon be introducing solids, we figured this would be a wise investment. And really, it truly is, though it took some trials to figure out what we were doing.

I let my husband be in charge of the experiments here. The directions and accompanying complimentary cookbook are all in Chinese so I have to learn how to use it from what my husband tells me to do. We ripped into the packaging and laid out all the accessories. Then my husband lovingly declared he was going to make me juice. We had some tangerines on hand and he grabbed a bunch of them. I should have known this would end badly as we normally devour all tangerines upon entry to our home. But these he’d bought the other day were not at all sweet. In fact, they were downright bitter. Still, maybe they’d make a better juice. My husband peeled about 5 of them and shoved them into the mixing cup. Then he thrust the stupid stick at them and ground them into one thick and pulpy mess, which you can see from the following photos.

He is such a total ham! 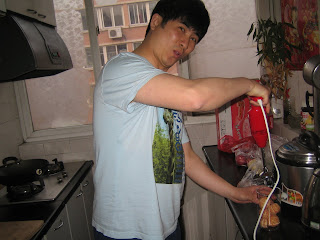 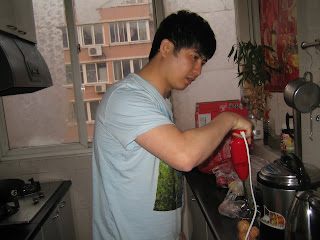 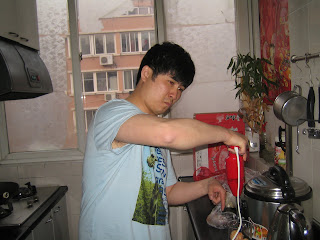 And now, for a close-up of the contents: 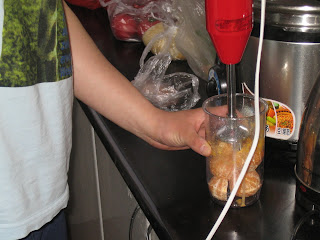 The tangerines are now being pulverized... 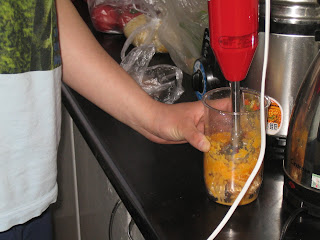 That doesn't look too tasty though, does it? 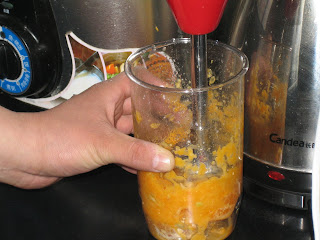 And now, for a taste of this fruity goodness... 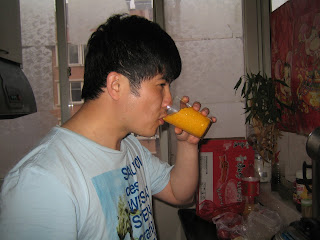 My personal favorite is this one right here, after the first taste: 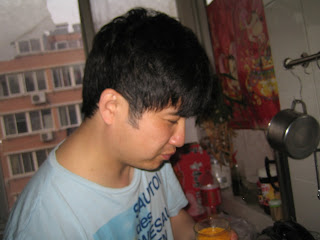 Priceless! The face says it all! Total juice fail! My poor husband!

Over the rest of the weekend, Xiaolong experimented some more. He made tomato juice which was a bit thick but very good. Apple juice, which was more like apple sauce but still, the taste was good. Some sweet spicy Korean meat dish from the recipe in the book that came with this appliance. And a yellow bean soup, also from the complimentary cookbook. By Sunday night, my husband was working it like a pro.  And ever since, we’ve been enjoying the fruits of our labor, mostly in the form of fresh juice.
Posted by JQ at 11:39 PM