Hurricane season just ended in my home state of Florida, but that doesn't mean I'm immune to Category 5 disasters right here in Qingdao. I cannot even begin to stress to you all just how happy I will be when my kitchen no longer winds up looking like this: 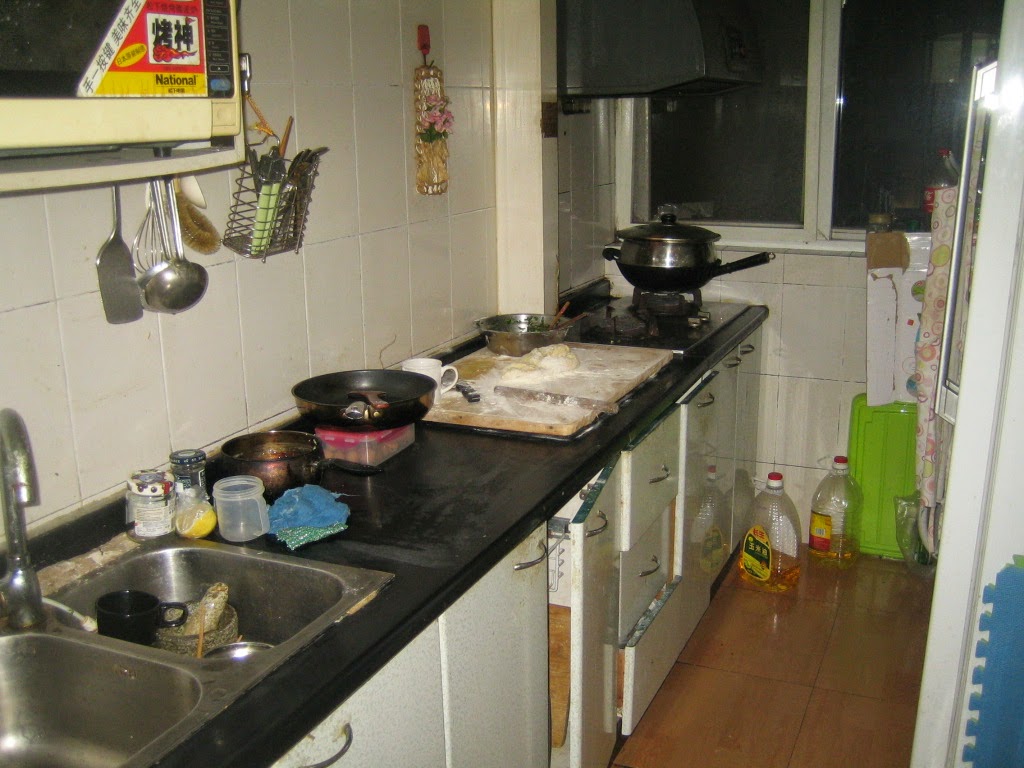 Or when we live in a place with a whole different kitchen. One that doesn't suck. One that isn't constantly being invaded by people who do THIS to it.

Please note that the above photo was taken AFTER she did some cleaning. Yes, AFTER. I had tried to snap a photo before but got caught up with the baby. She must be catching on that when I say, "What the fuck is this shit?!?" I'm talking about the unholy messes she's created.

Let's discuss this mess, shall we? She's piled a ton of cookery on the stove. She's left 2 giant containers of oil out. She left an assortment of dishes on the counter, next to her jumbo board she uses for rolling out dough for dumplings and that sort of shit. And that dirty rolling pin...memo to myself: go check the fucking drawer of kitchen utensils because you know old batshitcrazy MIL has probably thrown it in there without washing it. Oh and dig the dirty oily rag on the counter. I was just discussing that with an avid reader of my blog in the comments on another post. No matter how quickly Jeremy and I snatch up dirty rags and throw them in the wash, she will even more quickly grease up and grungify another one. If we didn't do that, I shudder to think how long she would go without washing a rag. Hang on. I almost threw up thinking about that. I think that will be what I use when I feel myself overdoing it on sweets. I'll think of the rag and I'll gag. And then I won't want to eat anything. Hmmm...it's just crazy enough to work! Goodbye, last bit of baby weight! 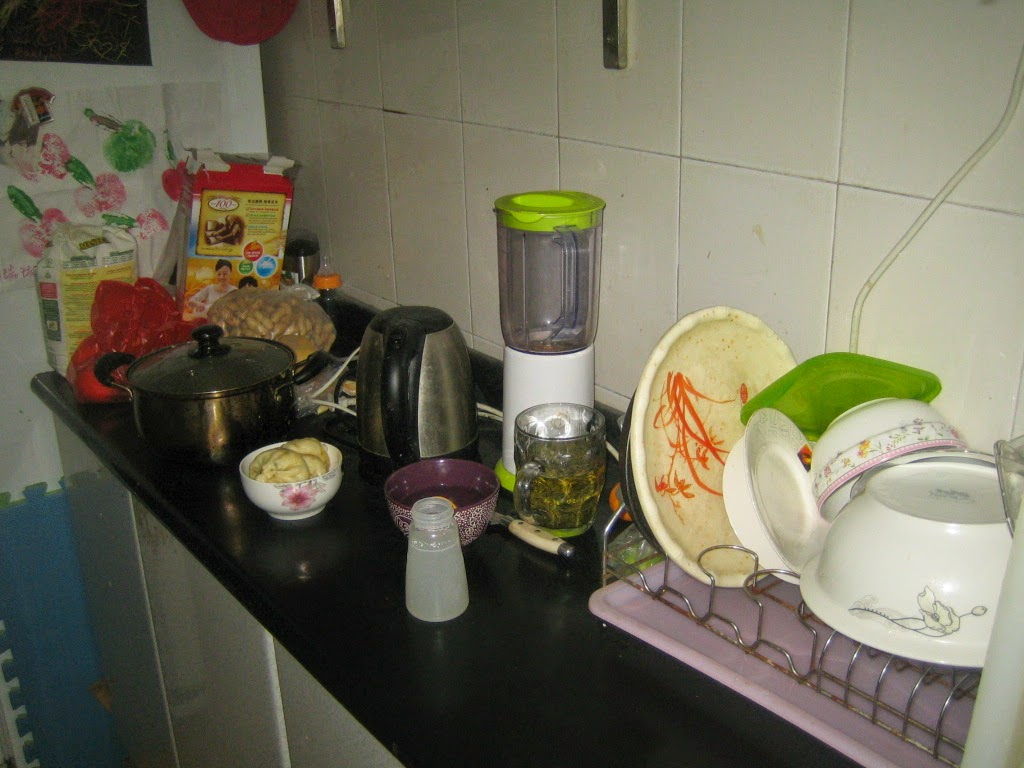 Anyway, just look at this shit. She never puts anything away. A bag of flour. A bag of peanuts. A pot filled with some meat dish. She served it to Jeremy but didn't even think to serve it to me. Pity, because it actually looked and smelled decent. No, no, no. Better serve Jennifer the baozi I know she hates. Baozi and cucumber sticks. Yes, my lovely daughter-in-law won't lob them at my big, fat lopsided head. NOT. You can see some of the baozi (those are steamed, stuffed buns by the way, in case this is your first time here) in that bowl by the electric kettle. And hey, by the blender, dig the beer mug FULL of green tea leaves. No joke. 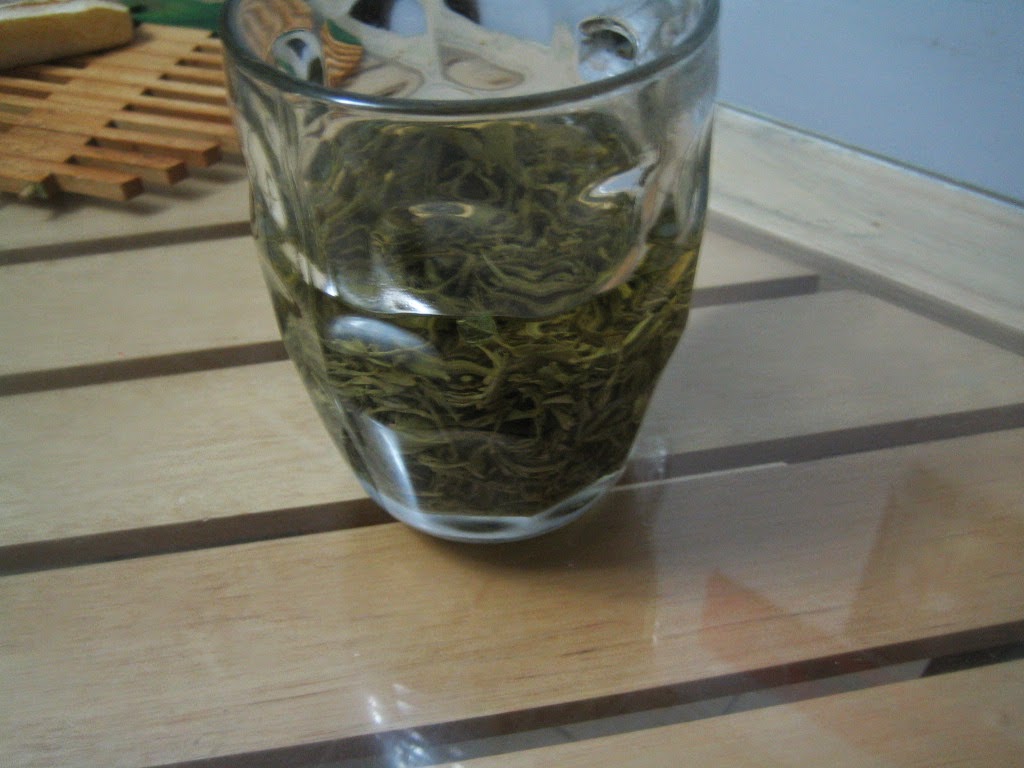 I moved it to the kitchen table to take better photos and show my husband. Lest anyone ever complain about the price of tea again. Or have any questions about who is wasting it. I'll give you a clue...MIL! 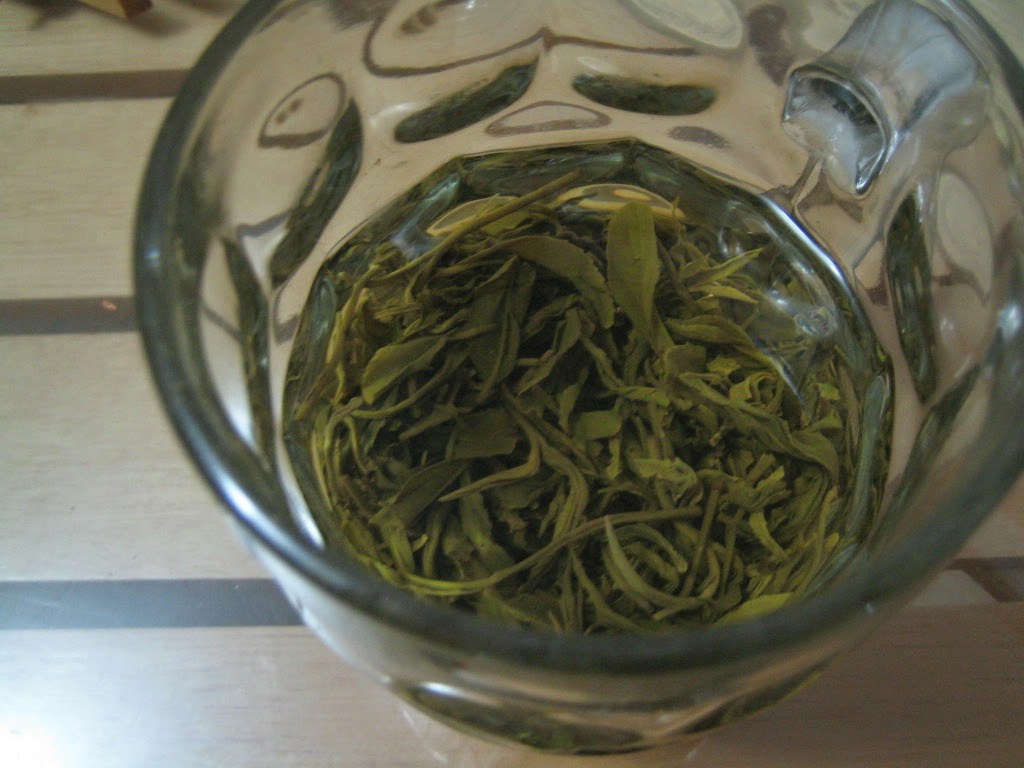 Just look how much tea is in there! Sweet Lord! And why are you using our beer mugs?!? My in-laws are so bizarre. Instead of using the countless coffee mugs we have, they use beer mugs or a glass I'd use for cold water to make their tea. 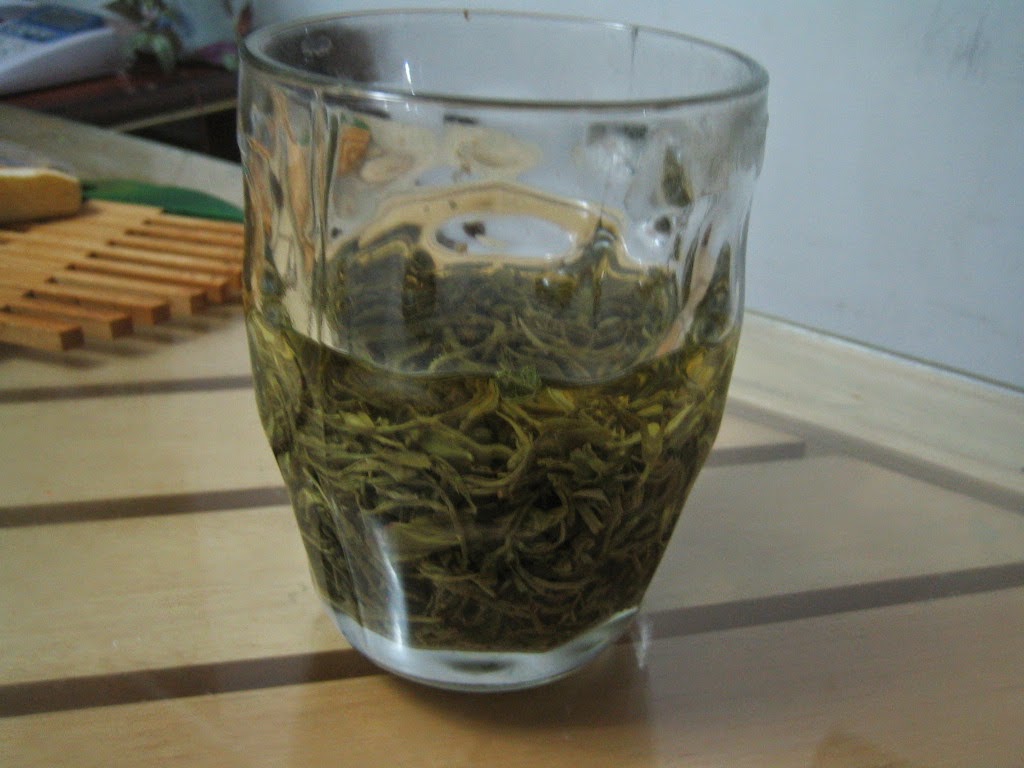 Half of that beer mug is filled with tea leaves! Gah! I give up. I'm going to throw in the towel. Or in this case, the oily rag.
Posted by JQ at 4:41 AM