Almost Had Me Fooled

This week, I promised myself that I would get around to writing a new blog post over the weekend. I've been extremely busy with work, exercising my ass off and spending time with Raelynn. And this whole time, I was surprised to find that MIL was actually being helpful and useful. I was going to write about that. I really, truly was. 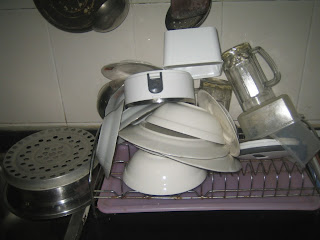 For a moment, I actually started to believe that MIL and I could peacefully coexist with one another.

Silly me!
I was so fucking wrong.
She seriously almost had me fooled. Until yesterday.

This weekend, Jeremy and I are celebrating 3 years of marriage. The beautiful day when we walked into the US Embassy in Seoul and officially got married. Even though our anniversary is on Sunday, we decided we'd go out to dinner yesterday, which was Friday here, without Raelynn. Her grandparents would already be here watching her while I was at work so it would be easy for them to just stick around, eat dinner and play with her until we came home. On Sunday (tomorrow), we will spend the day with Raelynn since she was there inside of me when we got married.

Yesterday, I rushed home from work. I wanted to have enough time to play with Raelynn and then change into something fabulous and fancy before going to the Shangri-La for a lovely meal. But when I opened the door, the house was dark and silent. No MIL. No FIL. And no Raelynn. It's also a complete and utter pigsty. There are toys everywhere. Food is sitting out in the kitchen. She's even forgotten to switch the gas valve under the stove off, which everyone here does out of safety. I frown and call Jeremy to report this. He's not happy about this either. He clearly told his parents we wanted to see Raelynn before we went to dinner. It was just before 4pm. If they wanted to take her for an outing, they should have done it hours before.

I decide to go ahead and primp and get all dolled up. At 4:45pm, I've finished with make-up, clothing and jewelry and I'm becoming angry as well as worried. Why are they still out with my child? What the hell is wrong with them? The land line rings and I answer it. It's FIL. I can't understand a single thing he's saying except for that he says Raelynn isn't with him! What the fuck?!?

Moments later, my husband arrives home. He calls his father back and finds out that his father has gone off to their hillbilly house out in Laoshan. He tells Jeremy that his wife and Raelynn probably went to the neighborhood park and some nearby yogurt place.

Jeremy is now visibly angry as well. He wants to see his daughter. He shouts a bit and then hangs up. See, when MIL usually takes Raelynn somewhere, FIL is with them. My FIL might not be the brightest guy, but he's got all his wontons. Unlike MIL. He's smart about watching out for bad people. I know no one will get close to Raelynn with him there. Also, FIL carries his cell phone with him at all times. MIL actually has a phone that we bought her and she NEVER fucking uses it. EVER. This is exactly WHY she needs to carry a phone!

We call over to their home but there's no answer. I've gone ahead and downed 2 shots of baijiu to soothe my nerves. It's now after 5pm. Jeremy is worried but feels they are probably just fine. But I point out that it's unlike MIL to not be shoving food down Raelynn's throat if she's around her close to dinner time. We decide to go look for them. Before we hurry out the door, we hear a child squealing. "Raelynn!" Jeremy screams with joy. He rips open our door and we're instantly disappointed. It's not our kid. It's just some ugly, fat Chinese child walking up the stairs. We hurry out the door, hoping that we'll find them at the park. Neither of us wants to go eat now. We just want to know Raelynn is safe and ok.

I wait in the car and look frantically around. I see lots of old, badly dressed ladies out with children. But none of them are that insufferable troll in one of her heinous mismatched outfits and my beautiful daughter. I pray and pray and pray. And thankfully, moments later, my prayers are answered. I hear my sweet Raelynn call out: "Mommy!" Jeremy is holding her now and she's so happy to see us. MIL is following behind, laughing away, as if she has no fucking clue how very serious this all is. Because people are watching us, I resist the urge to beat her to death in the street with my faux crocodile skin clutch.

That stupid fucking brainless knuckle-dragging oaf! I want to ask her what the fuck is wrong with her. She is so lucky Raelynn is safe. I will break her pan-faced troll head open if anything bad ever happens to my daughter in her care. We took them both back to our house. Jeremy and I lectured her about it, he in Chinese, me just rambling away as politely as I could in English. When Raelynn learned we were going to a restaurant without her, she was really upset. Or maybe it was because we were stuck leaving her with that imbecile again. I couldn't tell.

It's a miracle that Raelynn was safe and that we were able to enjoy our anniversary dinner. Plus, when we came home from dinner, MIL had cleaned up most of the mess she'd made (we spent all of today scrubbing the entire house together though). But she of course didn't do diddly shit about getting Raelynn for bed. 9pm and the kid is STILL running around the house. Fantastic. Stupid MIL. Make me all the fucking tortillas you want, bitch, but I am never forgiving or forgetting this shit.
Posted by JQ at 11:48 PM