Donuts...Is There Anything They Can't Do? 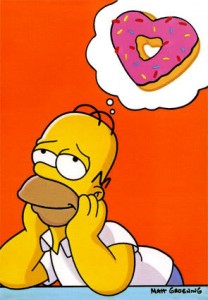 I love donuts. They make the best breakfast, snack or dessert, wouldn't you agree? I probably love them as much as Homer Simpson does. In fact, back when I lived in Florida, and one of the hurricanes was getting ready to plow us with days of rain and weeks of no electricity, I showed up to a friend's house bearing a box of donuts and a case of beer. Upon sight of me, he asked me if by chance Homer Simpson was coming to seek refuge from the hurricane too.

Lately, however, I've been avoiding all things dessert as often as I can in favor of shaping up. I haven't mentioned it very much on here because this blog is not a fitspirational blog. It's not even a motivational blog. Unless you're another poor soul like me living abroad with a spouse from a different culture and wacky in-laws, then it's probably motivating. Anyway, other than my 3-year anniversary dinner with my husband, I've pretty much abstained from chocolatey and/or sugary deliciousness.

That is, until Friday. Yes, Friday the 13th. How appropriate that this would happen to me on that day. See, I had to eat a donut. In fact, that's what I'd said to my buddy and fellow Kindergarten teacher, Jon.

Jon laughs hysterically. "You make it sound like you were held at gun point. I think this qualifies for quote of the day."

"No, really! It saved my life! Allow me to explain!" I plead.

It truly did. Much like the giant Lard Lad donut helps Homer save the say in the Monorail episode, this donut saved my day too. 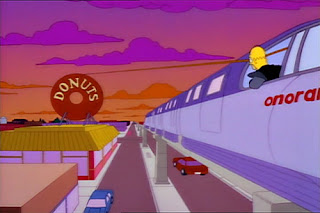 Here's how it went down:
If you think school lunches in the states are bad, they're not all that great over here either. Since I work at a Korean school, I get Korean food every day. I love Korean food, but this is not what I'd consider good Korean food. Once in a while, they surprise you with something good, but most of the time, it looks like this.

Anyway, I had some kimchi toward the end of my meal. If you don't know what that is, it's a fermented spicy cabbage that is actually pretty good. 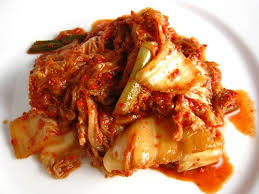 But as I finished my last bite of it, some of the spices got stuck in my throat. Not in a choking to death kind of way, but they stuck about halfway down and wouldn't slide the rest of the way.

So I'm not choking, but suddenly, this burning sensation erupts in my throat and every time I swallow, I feel like I've got a 5-alarm fire ripping through there. Surprisingly, I don't panic. I just head back to my office to drink my tea. The tea stops it from burning repeatedly but it now feels like I'm being stuck with glass in my throat. This is actually an improvement from the burning sensation.

Ok, don't panic, I think to myself. But of course, my stupid brain wants to, perhaps even more so than usual because this week, I'd found out my wonderful friend Ted Mister had passed away. And just like Homer Simpson, I remind my brain to shut up or I'll stab it with a Q-tip.

I have an apple I've brought for a healthy snack and I thought that maybe, just maybe, the apple might help push that stubborn kimchi crap down the rest of my throat. But that didn't work either.

Then, I remembered some very sage advice I was given when I was a kid. Was it Mom that told me? Maybe it was Grandma. Or my dad. It was one of them, that's for sure. The advice in question?
If some food sticks in your throat, eat a piece of bread and it will push it down.

By Jove! OF COURSE! I grab a wad of yuan and run to the school store up in the cafeteria. Now, because of eating healthier and getting back in shape, I have been steering clear of the school store. There are never any healthy offerings. They also stock fresh baked goods from a Korean bakery in town. On this day, I had very few bread choices to work with. There was a chicken sandwich which was out of the question. I tried it once last semester and while it wasn't horrible, I had to remove gobs of mayo from it. There was a package of 4 garlic bread sticks. I didn't want or need that much bread. There were a couple poundcake-looking things. And then, there was one lone chocolate-frosted donut. I decided that if a donut could save Springfield, then a donut could save me too.

And it did. It only took 2 bites of donut to clear my throat. But I kept on eating it until it was gone.
Posted by JQ at 7:12 AM