Back when I was in high school, which seems like yesterday but in actual time was 20 years ago now, it was so uncool to eat in the cafeteria. We either brought our lunches or drove ourselves to one of the nearby establishments such as McDonald's, Arby's, Taco Bell, a fabulous deli called Peter's Road Deli or my personal favorite, Mr. D's, where you could get a pizza bread and Coke for just $2. My friends and I wouldn't have been caught dead in the cafeteria for lunch. The only time we ever went to the cafeteria was to pick up our yearbooks at the end of the year.

My best friend from high school, Lauren (who is still one of my best friends in this world), and I had Spanish class together. Mr. Parsons. Second period. And during that time, we had the morning announcements. Mr. Parsons, for some unknown reason, would delight in reading the school lunch menu. His favorite item to read off was something called "whipped dessert with topping." He would read the whole menu for the day and then, if whipped dessert were on there, he'd pound on the desk right before announcing gaily, "Whipped dessert, with topping!" Lauren and I found this absolutely hilarious. Moreover, we wondered what the fuck whipped dessert was. One day, in the name of research, we went to the cafeteria just to see what it was. It wasn't anything very impressive but it didn't look all bad either. It was almost like a pudding but not quite, topped with a decorative swirl of whipped cream. Now we could sleep at night knowing what it was.

The school I teach at offers only Korean food. There is nothing nearby plus I have to sit and eat with the children so I'm stuck eating what they provide. I love Korean food so you'd think this would be a lovely experience. Somedays, the lunch IS quite tasty, but more often than not, it's not so great. I decided to document a week of my lunch for you fabulous readers so you can see how I am finally losing the rest of the baby weight despite eating cookies from the store to stave off starvation on really disgusting meal days.

Without further ado, here is my analysis of the school lunches from this week...
Monday: 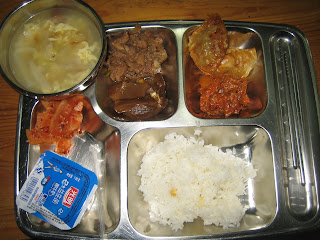 They always give you a massive pile of rice. I can never finish all this rice. There is always some sort of soup too. Most of the time, the soup is good. This one, totally nasty. It had some weird bitter radish and eggs in it. It smelled like old dish water and that's how it seemed to taste too. Not that I habitually drink old dish water but I think you know what I mean. Next to the soup, there is some meat dish which was pretty good, but I couldn't eat the whole thing. See, it's sharing a section with something horrible. That brown jelly thing. See that crap? Do you know what that is? Go on...guess. Give up? It is coagulated cow blood. I am not making this up. Oh it is absolutely one of the most disgusting things ever and it was touching my beef. Ugh! But in the next section, we have some fried dumplings which were rather yummy. Too bad they only gave me 2 of them. Along with them, kimchi. I love kimchi! But this particular style of it tastes horrible. It's something in the sauce that I cannot place. So I couldn't even eat the kimchi shown here. Then we have thinly-sliced radish kimchi-style, which was edible. I was also thankful for the small yogurt. 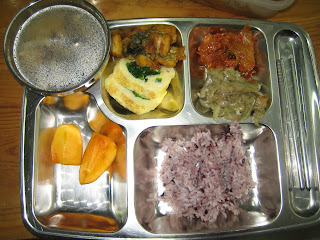 Tuesday's soup was troubling. I stirred it and couldn't really figure out what the contents were. It looked like sticks. Is there a stick soup? The smell was off-putting too. I took a sip of the broth and didn't die but there was no way I would live through a bowl of this. Next to that, you'll see some fried-looking thing. That's fish. Which fish, I couldn't say. It wasn't bad, but it wasn't good either. Then, we have an egg with spinach stuffed inside. Now that was actually very tasty. It was the saving grace of this meal, that's for sure. We also have some eggplant thing which was, sadly, very bland. I love eggplant. It broke my heart to see it cooked in such a lifeless way. It's like something MIL would do to the food. If she wasn't home with my baby all day, I would suspect she was working the line in the cafeteria on some days, honestly. You may have also noticed the gross kimchi has been served to us again. The meal is completed with a massive pile of sticky rice and some strange but good fruit thing. 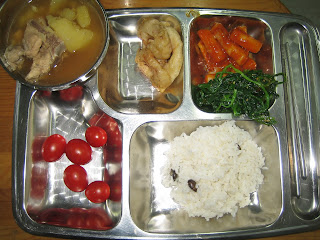 Now THIS is my idea of a good school lunch! Here we have 감자탕 (kamja tang) or pork bone soup. It has pork spine in it which sounds grosser than it actually is and 감자 (kamja) which means potato. It's really quite a wonderful soup, though Korean restaurants make it better than the school cafeteria. Next, we have fried squid, also another yummy item. The red-sauced item that looks like pasta is actually떡볶이 (tteokbokki). What IS it, you ask? It's a soft rice cake cooked in this fantastically spicy sauce. It's something I grew to love when I lived in Seoul. When I first tried it, I couldn't even begin to handle the spice. That was on one of my first dates with Lane, actually. We had gone walking along the Han River and afterward, we stopped at an outdoor street vendor tent, which was my first experience of the sort in Korea. I liked the flavor but the afterburn of spice caused my eyes to water uncontrollably. Both the vendor and Lane laughed hysterically at me. But over the course of my living there, I soon found that my taste buds had adapted to all the spice around me. This tteokbokki would have only been better if topped with cheese, like at my favorite little spot down the street from our old home in Seoul. Then we have some spinach, tomatoes and rice which were all as normal and refreshing as they look. 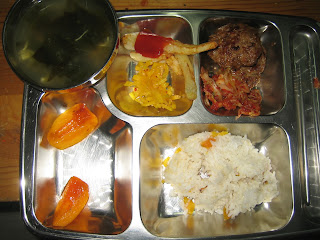 Though not as good as Wednesday's lunch, Thursday's lunch was what I would consider a fairly decent lunch. The seawater-tasting kelp soup, however, was not at all edible in my opinion. But the disfigured French fries with ketchup made up for that. As did the wannabe hamburgers that tasted more like meatballs. There was also some spicy vegetable thing that was rather pleasant plus the good kimchi, rice with some chunks of sweet potato and the same strange but good fruit that we had on Tuesday.


Friday:
Regrettably, I have no photo for Friday. That's because we had our Halloween party and things were just crazy busy. And instead of eating our lunch in the classroom, we had to take the children up to the cafeteria. We never do that because of the big kids but on Friday, lunch was held early to ensure they wouldn't get underfoot of the older children. This decision was made because there would have been no time after eating in our classrooms to clean them up before the parents arrived for the party. Friday's lunch was great though, with a spicy curry stew as the main highlight. I wish I hadn't spaced and forgotten to take a picture. I did solve the mystery as to why some days we get the gross kimchi and others we get the good kind. There is a kimchi bar in the cafeteria! It has about 7 different kinds. I guess when we have lunch in our rooms, they just send down whatever they feel like giving us. Oh well. Here's hoping the upcoming week serves us up more meals of the edible kind.
Posted by JQ at 1:23 AM