Pink Is The New Blue

When you see pink, what do you think of? What about blue? If you said "girls" for pink and "boys" for blue, you're thinking like the majority. Me too. But how did these colors come to be so gender specific anyway? Should it matter what colors our babies wear? Maybe it shouldn't, but it does. I know I will probably catch hell for what I'm about to say, but so be it. Baby boys should not wear pink. There, I said it.

Now I'm not saying a grown man can't choose to dress himself in a lovely light pink dress shirt under his suit. I'm not even saying a little boy can't go pick out a pink shirt to wear when his mom takes him shopping. Babies and beauty are in the eyes of the beholder and for me, Raelynn's got to dress like a little lady. If I chose to dress her in blue, that's my prerogative as well. But what if someone, like my MIL for example, bought blue things for her? Or clothes with cars and trucks on them? Clothes that just scream boy?

Fortunately for me, this is not a problem I ran into with my MIL. Sure, we had other fashion-related problems with her but not like this. One of my many pregnant friends is getting ready for the arrival of her son. And like me, she's married to a Chinese man. But unlike me, she mostly likes her MIL. Though that may change as her hormones begin to go crazy on her, coupled with her MIL buying questionable clothing items for this bouncing baby boy.

She was kind enough to share these with me, so let's have a look... 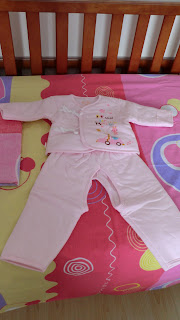 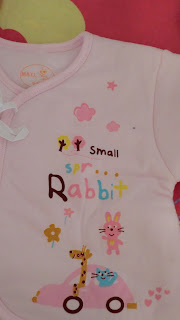 It says "small spr Rabbit" on it, which is delightfully stupid in an Engrish sort of way but no one I know wants that kind of shit on their child. Then there's a lame pink rabbit, and a pink car with what looks like a giraffe and another rabbit, this one blue. The car is emitting little hearts instead of noxious fumes. Or perhaps it's symbolic of love being a poisonous gas of sorts. Who knew that Chinese baby clothes were so deep and meaningful?

My MIL certainly chose some things that were about this ugly, but there was no mistaking that she clearly chose clothes for a girl. She picked out a few things that had similar ties on the front. Maybe it's a Chinese MIL thing. I don't know. What I DO know is that trying to tie a shirt, dress, pants or whathaveyou onto a squirming and possibly crying infant is maddening and is not something I recommend attempting unless you truly want to lose your sanity.

But if you really want to lose your mind, come to a country where people think these split-crotch pants are acceptable attire. Here is a closer look of the pants for the pink track suit... 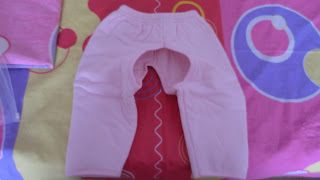 What cracks me up, pardon the pun, is that Chinese people (mostly the women) will nag and pester you about how your child isn't bundled up enough for the weather. Even if your child is dressed in a parka and it's hot outside. They will come from out of nowhere to butt in (again, pardon the pun) and tell you that you should be more careful to dress your kid more warmly. AND YET THEY PUT PANTS LIKE THIS ON THEIR KIDS WITH NO DIAPERS ON UNDERNEATH. So I'm having a hard time understanding this one, as are my other friends here, especially the one who now is scratching her head about this fucking track suit and wondering what the fuck she should do with it. I'm quite sure the thought of strangling her MIL came to mind as a use for this crap. But hopefully, she will be like me and create her very own vortex for ugly clothes and hide this barfy thing where her MIL will never find it or even better, will completely forget about it after a spell. Good luck, girl.

And here's another item given to my friend by her MIL: 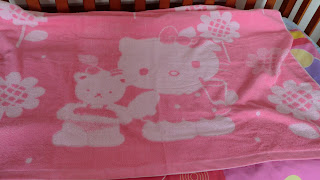 It's a giant Hello Kitty "blanket." I use the term "blanket" loosely as it is made from terry cloth, just like a towel, though here, this kind of material is rather rough, like the sort you'd find at a cheap motel. So it's really a giant Hello Kitty towel. Made from inferior cottons and dyed with toxic chemicals. But I've noticed that in China, people will use towels as blankets which bothers the hell out of me. I caught MIL using our towels as blankets for Raelynn when I came home from work one day. She knows where the blankets are but yet would dig for this nasty-looking giant towel I'd use to throw down on the sand at the beach. So, into the vortex that thing went and it won't come out again until summer when we go to the beach again. But that's neither here nor there. Using a towel as a blanket totally makes me think back on the kind of days where you'd get too shitfaced with your friends, pass out cold on the bathroom floor and someone would toss a towel over you to help keep you warm while you'd drool onto the tiles. Yeah. Thank GOD those days are over.

But back to this Hello Kitty hell. This sort of crap is why Chinese MILs will quickly get on your nerves. I know this feeling all too well. It's the one where you feel like someone else is trying to forcibly exert their taste upon you. It would be like having my MIL come in and redecorate our home with things she thinks are tasteful. And thankfully, the opposite of that happened here in regards to home furnishings. I empathize completely because nothing is more annoying than having someone, especially someone who you experience a massive cultural and generational gap with, do this to you. It's hard enough having a baby. Add to it being a stranger in a strange land. And add to all that a bunch of ugly or stupid items that someone expects you to use on your child. You don't want to be rude, yet it's YOUR child and you want that child to be put in clothing that is easy to put on and take off, not to mention that suits your tastes. Raelynn could fully decide never to wear pink again and beg me to dress her like a boy, like Brad Pitt and Angelina Jolie's little Shiloh. I sure hope not, but as long as it is what she wants. But for now, she wears what Lane and I want to see her in and that is the way it goes. It all starts with simple shit like clothes and blankets and soon, snowballs into a full-on power struggle where the MIL attempts to invade every aspect and every decision about the baby's life. Perhaps we should have created a MIL vortex instead of one for appalling apparel, but I doubt there is a blackhole out there large enough for this sort of disposal. Until then we will smile, say thank you and abruptly shove things like this into an alternate universe.
Posted by JQ at 11:46 PM