And My Husband's New Name Is...

Your first clue is this song:
At home, drawin' pictures
Of mountain tops
With him on top
Lemon yellow sun
Arms raised in a V
Dead lay in pools of maroon below.

If you know which song this is, then you know what the-husband-formerly-known-as-Lane has decided to choose as his new English name. And if you lived in a hole somewhere and have no fucking clue whatsoever, you have no idea who sang the song I'm referring to or what the title to it is for that matter. Plus, you are likely also unaware that my husband recently declared he didn't want to be called "Lane" anymore.

We received quite a few suggestions. Thank you to everyone for your emails and comments. We had some rather amusing ones and my friend Kim Kluge from college and I discussed the possibility of "Foot" being used, which would actually have been fitting since my husband did play soccer back in college. He'd chosen not to go pro despite his capabilities and opted to go to graduate school for his masters degree.

So for the dense people out there who are still scratching their heads as to what name he chose, it is without further ado that I present to you... 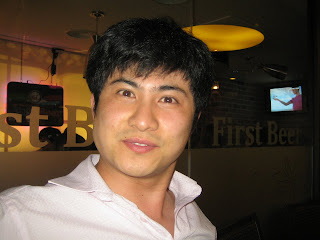 I kind of like it, though to be honest, I keep accidentally calling him "Lane" now. I knew I should have never even indulged him an English name. I should have just stuck to calling him Xiaolong or my other endearing names for him. He chose it himself too and he's quite proud of this. At least he can pronounce it correctly. I would have been mortified if he chose "Dade." Oh well. Too late to change it now. That is, unless he suddenly sits up in bed one day in the future and tells me he really wants to change his English name again.
Posted by JQ at 1:51 AM