Tonight, my already sweet husband did something extra sweet. He ordered me a pizza from Pizza Hut. Yes, we have those here though typically, the service is horrendous. The menu offers 1,000 other things too, some of them rather odd to an American like me, though the pizza is as it should be. You'll find crazy pizza offerings like those with shrimp heads and fish. But they do have a Hawaiian pizza and a plain cheese pizza.

Lane told me I'd been so good with my exercising and eating healthy. I guess he felt badly that the other night, he'd had food poisoning and on top of caring for him (which was on top of my already frazzling taking care of Raelynn duties), I had to forgo eating anything remotely delicious. In any event, despite my pleadings, he ordered a pizza for me. I had wanted a simple cheese pizza. But Lane broke some bad news to me. Not only would they not deliver to us, but they also would not make a plain cheese pizza.

Here's where things get cracked out: they tell him they're changing the menu and they no longer offer a plain cheese pizza. And here's where it gets insane: they tell him they can do bacon and cheese. CAN'T YOU JUST LEAVE THE FUCKING BACON OFF? I mean COME ON! That's less work for them, right? Is it THAT confusing to just put cheese on the pizza and shove it in the fucking oven?

Then, something else occurs to me. Just like in Korea, here in China, they will throw corn on top of a pizza. CORN! I remember ordering a cheese pizza while in Korea and it coming back with corn on top. I wanted to kill them. I have nothing against corn, mind you. I just wanted a simple, plain cheese pizza. NOTHING ELSE. But Asians everywhere are determined to ruin pizza. I ask Lane if he's sure it's just bacon and cheese on the pizza. He says it is.

In no way do I blame my husband for any of this. He did something so kind and selfless. He dashed out into the cold night, caught the number 12 bus to the Pizza Hut closest to us and 30 minutes later, he was back, pizza in hand. Yay! Pizza! Right? 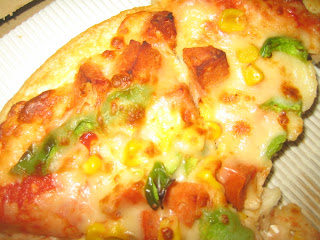 Wrong. Does this look like bacon and cheese to you? No? Me neither. Let's start with this so-called bacon. This is NOT bacon. It is some horrid sausage thing. Now, I love sausage. On pizza in America! I can not even stand sausage from Korea or China. It's gross. They also, for whatever demented reason, have seen fit to include green bell peppers, which, if my brother were eating this, would have caused a gastrointestinal upset for sure. Peppers don't sit very well with me either. I love the taste, they just don't get along well with my internal organs as I'm aging. And look...it's my nemesis...CORN!

FUCKING CORN! Okay, look. I totally get it. You guys like weird shit on your pizza. Good for you. But please don't call it "Western-style" if you are going to stick nasty not-even-hotdog-quality-sausage on a pizza and call it bacon AND THEN sprinkle it with corn. It's not Western-style. It's Asian-style pretending to be Western-style. Let's not sugarcoat it. Or in this case, corn-coat it.
Posted by JQ at 5:14 AM