The Case Of The Mysterious Puddle 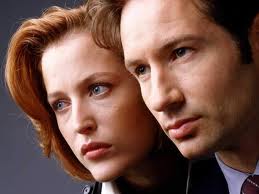 Someone call Agents Mulder and Scully because this is some X-Files shit right here. Ok, maybe not. But still. Call Mulder. He was hot.

So what is the big mystery over here? My husband ran some errands and when he returned, he discovered a puddle of water in the middle of our bedroom. *cue spooky music* Let me just tell you that it was not there before. Jeremy was only gone for a short while. During this time, I gave Raelynn a cracker and let her watch Nickelodeon in the living room. And then, she came to get me, jabbering away. So I went with her. But I shut the door to the bedroom. The puddle was not there when I left the room. As lunch time approached, I went into the kitchen to make us something to eat. Again, the door to the bedroom was still closed. Soon after, we sit down to lunch. While we're eating, Jeremy returns home with some things from the market, including new fish for our tank (we were down to just two and I felt they were lonely). He put the fish into the tank and then went to change. That's when he pointed out the relatively large puddle on our floor. How did it get there?!?

Here are our theories:
1) Raelynn did it.
This one is Jeremy's. He thinks Raelynn did it before I locked her out of the room. But I disagree wholeheartedly here. While she's fully capable of such a thing, there were no cups of water within her reach when she did have access to the room. All cups and bottles were in their original places still. Plus, when I left the room and shut her out of it, I would have had to walk right through the puddle. I definitely would have noticed this.

2) Something leaked from upstairs.
This would make so much sense. Except nothing else was wet. The ceiling has absolutely no signs of dampness. The puddle looked like it had been caused by something dropping down and splattering water.

3) It came from the window.
This is the least likely because there is no rain or snow today. And nothing next to the window was wet either. I went through several moments of severe panic when I first saw the puddle simply because my computer IS by the windows. I inspected the whole area and there was only the lone puddle in the middle of our floor.

4) My husband somehow spilled water from the new bag of fish.
He totally denies this but I think this is the most logical explanation that isn't of supernatural origins. Our fish tank is in the bedroom on the counter that is between it and the living room. My husband had entered the room and walked around though I was busy with Raelynn at the time. I think somehow when he first came into our room, he must have sloshed some water out of the bag with the new fish.

Email ThisBlogThis!Share to TwitterShare to FacebookShare to Pinterest
Labels: WTF