With a title like that, you probably think I'll be launching into my next tirade about MIL, but this one's about school. And it's really not that much of a rant. Just a bit of whining.

See, for the last few years, ever since I started this job, I used play money in my classroom. The idea was to use it to reward my students for good behavior and completing tasks and to punish them for breaking the rules. It also had the added benefit of teaching the children to keep track of their money and having them learn how to take pride in saving it. By the end of each school year, none of my children ever spoke Korean during lessons. And every single one of them could count all their money by themselves. Not one parent ever complained to me or the school about it.

When I came back from maternity leave, I'd found that my Korean teacher and kindergarten director, Christina, had told the substitute not to use my play money system. Long story short, I was told that now my class size was 16, down from 20, and that 2 of the students left because of my system. I highly doubted that was true and my Western boss, Patrick, had the same feeling. But he's a fair guy so he had me send home a letter to the parents asking them to rate the play money system and write any comments they had. Patrick said if it was only a few parents complaining, we could ignore it, but if not, we'd have to tweak the system a little bit.

Incidentally, I seriously call bullshit on any of those children leaving because of the play money system. One boy left to go to ISQ, the best and most expensive international school here. Two girls and a boy left to go to Chinese school instead which often happens when families plan to stay in China for a while, or if they are half Chinese. One girl left but I was never told the reason. Her English was outstanding and she was well-behaved so she'd won at the end of a couple of months for having more money than the others, so I doubt her mom would have complained about that. And the other child that left was that The Chihuahua and while we're all delighted he's not there, his parents didn't pull him out because of the play money system. By the way, I'm sure you're doing the math and saying that doesn't add up. True that I suck ass at math, my math is not off here. I had 2 new students when I returned, and thankfully, both of them are great kids.

So the letters went home and then they came back. Most of the comments were in Korean so we had them translated. Two comments were written in English and those parents rated my system well. They expressed that they liked the system for its' many benefits and felt it was important to use to help teach the children how to mind their manners, be responsible and keep track of money, among other things. I had a few others saying they also liked the play money system.

And then there were about as many negative comments. But the comments were absolutely ridiculous. I do believe people are entitled to their opinions but, when someone basically tells me "I think you should only use it to reward the children," or "it causes children to tattle" (newsflash - EVERYTHING causes children to tattle!) I think their opinions are stupid. If you dislike the system, so be it, but don't make up idiotic reasons to tear it down. The worst was someone complained their child never won and was always losing money. That was likely someone whose child broke our class rules and didn't do their work. But no, that's all MY fault, isn't it? Couldn't be your child's fault now, could it? They ran down the hall so just blame me because it's not like I don't have "No Running" posted in our classroom or I don't tell them not to run every time they get up from their desks. Nope.

This group of children and their parents are unlike any other group. Their level is the absolute lowest I've had. And it's no wonder - the parents don't hold their children accountable for their behavior and don't have them study anything outside of school. Once they go home, they're overindulged and watch things in Korean. They don't practice anything in English. Yet their parents expect a miracle. I have about 5 students that are doing awesomely because their parents actually push them to. One is Heathen who, as you may recall, has other issues but his English skills aren't one of them. He has a tutor 2 days a week and it shows. He's weird and annoying, but talking to him in English is a treat. Like today on the playground. I see him picking his nose. So I tell him, "Hey Heathen, don't pick your nose. That's gross." And freak that he is, turns to me and says, "But I like picking my nose." Lovely.

Anyway, we decide that we should just change the system and make it simpler because obviously this is too much thinking for these people to do. We change it to marbles. The moms send in clear plastic milk bottles and the school orders me marbles. I tweak my system a bit and send home an updated list of rules, along with a list of what will be rewarded with marbles and what behaviors will cause students to lose their marbles. Christina explains to the children in Korean after I tell them in English.

And the marble system is going great. It looks prettier too and I don't have to make tons of copies of paper money, cut it out, laminate it and cut it out again. Christina also made a sign for it because our Open Class is this week. Tomorrow, actually. And somehow, I'm not nervous, though ask me if that's still true tomorrow. 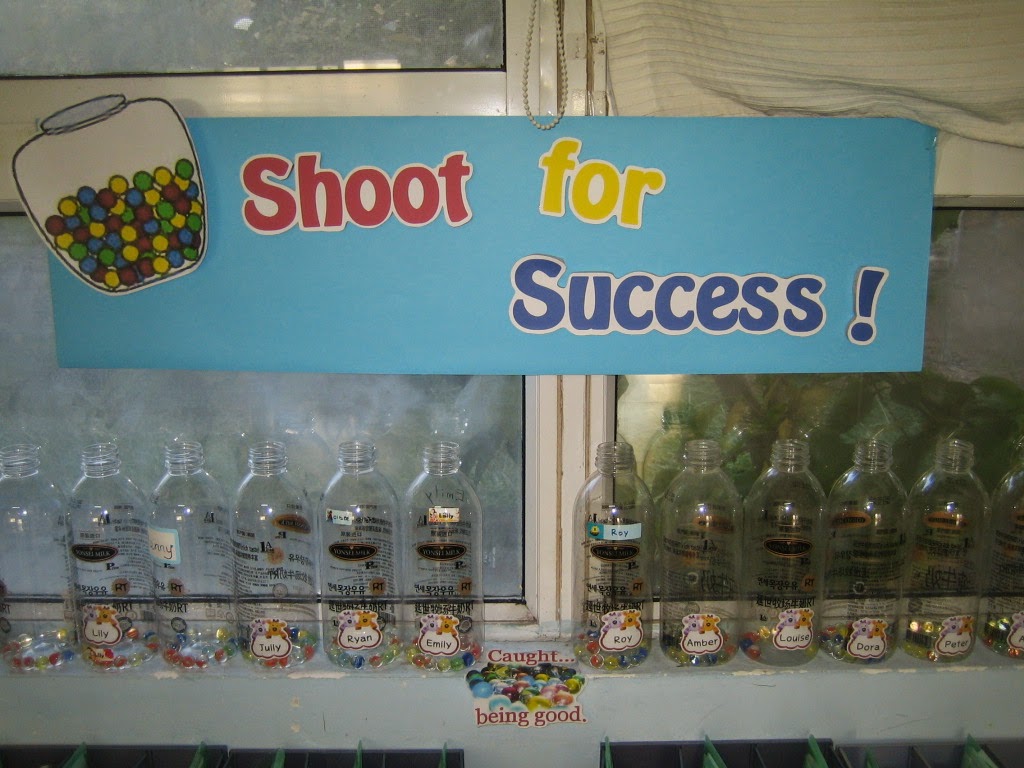 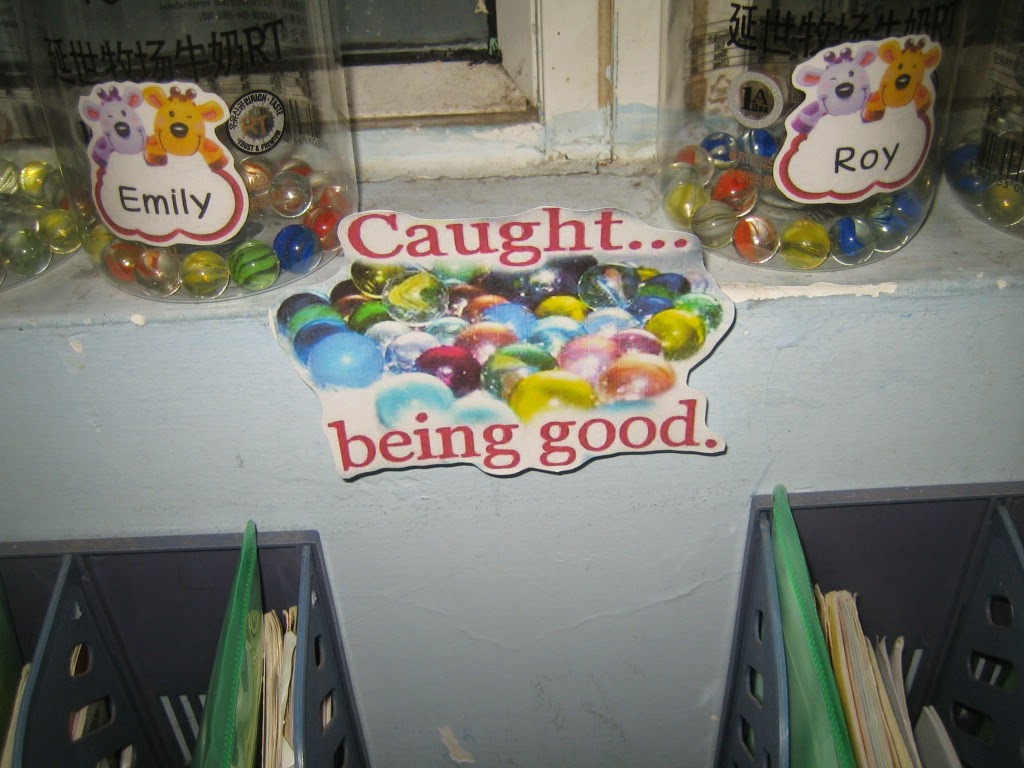 "Caught...being good." Oh and yes, to my best friend Lauren who loves Overboard as much as I do, someone DID give their child the English name of Roy. It brings me great joy every day to picture Kurt Russell saying, "His name is Travis." Ahhhh.

In any event, while I did come up with "Shoot for Success" on the sign (Christina just helped make it pretty because she's awesome like that), I did not sign off on this little thing. Which she mounted on foam board and was all proud of. Oh. God. No.

She originally wanted to put it on the good sign, just to the right of "for" but I told her I didn't like it there. She was so proud of it I couldn't tell her I hated it. And she's one of my bosses so I can't just tell her that her idea is stupid. Oh Christina. I love you to pieces but noooooooooooooo. This is awful.

I relented and suggested putting it where you see it in the above photo. It was my hope that there, it's less noticeable. I know why she did it though.

Because of all these whiny give-my-kid-a-trophy-or-reward-for-everything parents. Christina was just trying to appeal to them. Sure, they get marbles for being good. But they lose marbles for being bad too. I get it. I truly do. But it doesn't mean it doesn't suck. I hate the way the future looks with these kinds of kids in charge of the world. That seriously scares me. And it should scare you too.
Posted by JQ at 5:25 AM