To The Mom In The McDonald's At Wanda Plaza

What a truly shitty weekend this was. All 3 of us got sick. I've been sick since last week with a sore throat that turned into the disappearance of my voice, then morphed into rivers of snot and phlegm and a horrible cough that hurts my head. Jeremy and Raelynn soon followed suit so off to the doctor we went. Being pregnant, I can't do anything about it except drink ginger tea and eat cough drops. And suffer. But at least we could get Raelynn back to feeling better. She was such a trooper, so my husband suggested we stop for donuts at the Wanda Plaza mall, which is close to our home.

I was excited too. Donuts! Korea is totally a donut-loving country. But China? These people seriously need some education on why donuts should be available on every corner. That's why I was so delighted when we discovered a place called Donut Stop in the Wanda Plaza mall. We hurried up to the second floor, across from the McDonald's and stopped cold. Where did it go? Instead, there was some crappy Chinese bakery that, despite looking nice, had stupid Engrish on the front. Things like "fashion-baking." Whatever the fuck that means. We went in and my husband asked about the donut shop. They said it closed down. I stormed out. I don't want your shitty baked goods. I HATE YOU! You destroyed my donut dreams!

Raelynn had also requested ice cream, and took the news of the donut shop's closure much better than I did. Now where the fuck am I supposed to get my donut fix? Stupid Qingdao. I hate this uncultured city. But at least we do have McDonald's. So my husband suggested we get some ice cream from there. Raelynn was on board and I thought what the hell. But ice cream turned into fries and lunch along with it.

I'll admit the ice cream cheered me up a bit but I'm still sad Donut Stop is gone. That place was as close to Dunkin Donuts in taste as we were going to get in this hole. Now I have to wait until we go up to Beijing to find donuts.

But something, aside from salty fries, double cheeseburgers and ice cream, turned my mood around. At the booth across from us was a Chinese family. A mom, dad and their small baby boy, who I would estimate to be between 6 and 9 months. The adults were having ice cream. And the baby? He soon began fussing. I saw the mom fumble with him and I knew what she was trying to do. She was trying to breastfeed him. Unfortunately, she was a bit large so she couldn't situate herself in the booth without hitting her kid in the head on the table so she trotted off to an empty table in the rear. I wanted to tell her to keep being awesome. I didn't want to startle her though. The heat in the restaurant was unbearable, as at this time of year, people are too cheap to turn on the A/C, even big places like McD's. My husband stepped outside because he could no longer wait for Raelynn to finish eating her ice cream at a snail's pace. I wanted him to come back so he could help me tell this woman that I hope she breastfeeds her son until he's ready to wean. That she tells her mom friends to breastfeed. That she never experiences shame when doing something so natural.

It made me happy because many Chinese women are uneducated about breastfeeding. Despite this though, people here are never rude to you for breastfeeding in public. So, in the off chance that mom might read English, I'm sorry you left before I had the chance to tell you to keep up the great work breastfeeding your son. From the American gal with the darling daughter who cried when we finished all the French fries but then stopped when she realized there was ice cream. 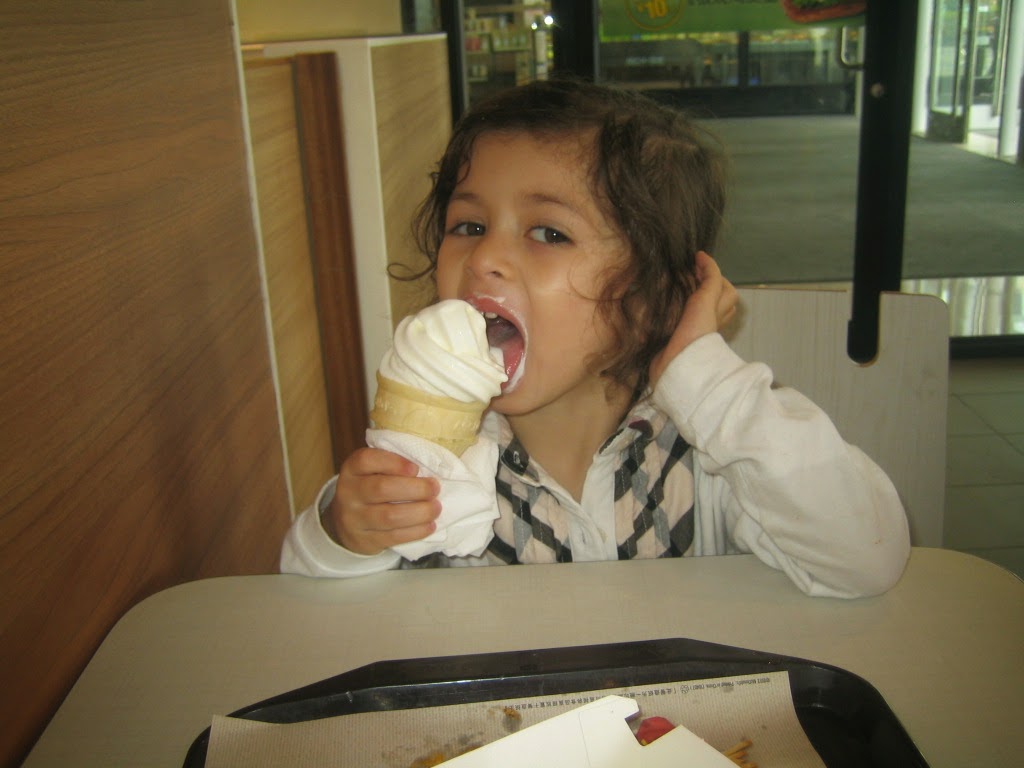