For Americans like me, this upcoming Sunday is Mother's Day. But for the Korean kids I teach, today, May 8th, is Parents Day. The other English teacher and I always did cards for both Mother's Day and Father's Day, but it was decided this year that on Parents Day, English teachers would help the kids make cards and the Korean teachers would help the kids make a craft. Hey, that's one less card for us to deal with.

I made a card with a front/back design. Because of the winter holidays, we're never in school for Valentine's Day, so I thought why not fashion my card to look like a Valentine? I cut red squares out and then cut pink hearts. On the hearts, I wrote "Happy Parents Day" in pencil so my kids could trace them without making mistakes. I'd have my kids glue this heart to one side and use their markers to doodle some hearts or whatever they felt like on the heart. Then, on the other side, they would glue a piece of paper with a message they would write themselves. And by that, I mean they would copy a message I made for them from the board.

Never before have I ever had a problem with my students completing the task in previous years. NEVER. I've had some wonky gluings but no one has ever had trouble copying the message and assembling the card in 40 minutes. EVER.

I swear, I have the most defective class. And I thought this would be easier with The Chihuahua in Korea! Boy was I wrong! With The Chihuahua gone, I had 19 students present today. Out of those 19, only 12 were able to finish the card in 40 minutes. After this class slot, it was break time for me and Chinese class for them. When I returned for our 40 minute-class before lunch, I decided to reward the 12 who finished their work properly with $5 in play money. For the other 7 slowpokes, I rewrote the message for the card on half the board and made them finish the card while I taught a lesson about things you find in town (library, restaurant, movie theater, etc.). I could not even believe it when it was time to get them ready to go to the cafeteria for lunch...2 girls STILL had not finished this simple card!

I lectured them and told the Korean teacher. I was absolutely stunned. After 2 months of school, these kids should be used to copying shit down that I write on the board. I have given them tons of assignments involving this very thing and never had this low of a success rate. When I came back for my last class at the end of the day, Christina the Korean teacher was yelling at the 2 girls who even still had not finished the card. She was packaging up their cards into a nice bag with the craft they made with her so it would look nice when they gave it to their parents. Sarah and Lily, the 2 non-finishers were totally holding up production on this.

Is it unreasonable of me to expect 7 year old children to be able to copy something off the board in a timely fashion? I don't think so. I know I'm not being too harsh because Christina has expected the children to write their own cards with me since I started working there.

Once Sarah and Lily FINALLY finished dragging their asses, I gave the children another writing assignment. I wasn't trying to punish them...it was just what I had coincidentally in my lesson plan for this class period. I gave them a sentence to write:
In the hay by the lake we will eat a lot of cake.

It's from our phonics book. We're studying the long 'a' sound now. I asked the children to write it 5 times and I offered them $10 in play money for completing the task. I've done this with them so many times and I can tell you that most of the time, most of the students have been able to finish. About 5 - 7 usually don't for varied reasons. One is The Chihuahua, and I kind of expect that from him since he's just started learning to write. Another is a boy who seems to have some kind of mental block. He's brilliant but if you ask him to speak on cue, he clams up. His handwriting is beautiful and he knows what he's doing but when I have these sorts of assignments, despite the play money reward, he won't comply. Even though I gave them the same amount of time to finish as I usually do, only 10 of them actually finished the work. The other 9 all blew it. I seriously wanted to bang my head repeatedly onto the desk. I am at a loss for words. I have never seen such a lethargic group of kids.

After I led them out to the school buses, I went into the office and found Raelynn's bag along with a gift for Jeremy and me. For Parents Day! And it was just what I needed after having the thankless task of teaching this batch of students.

Check out what Raelynn made for us! 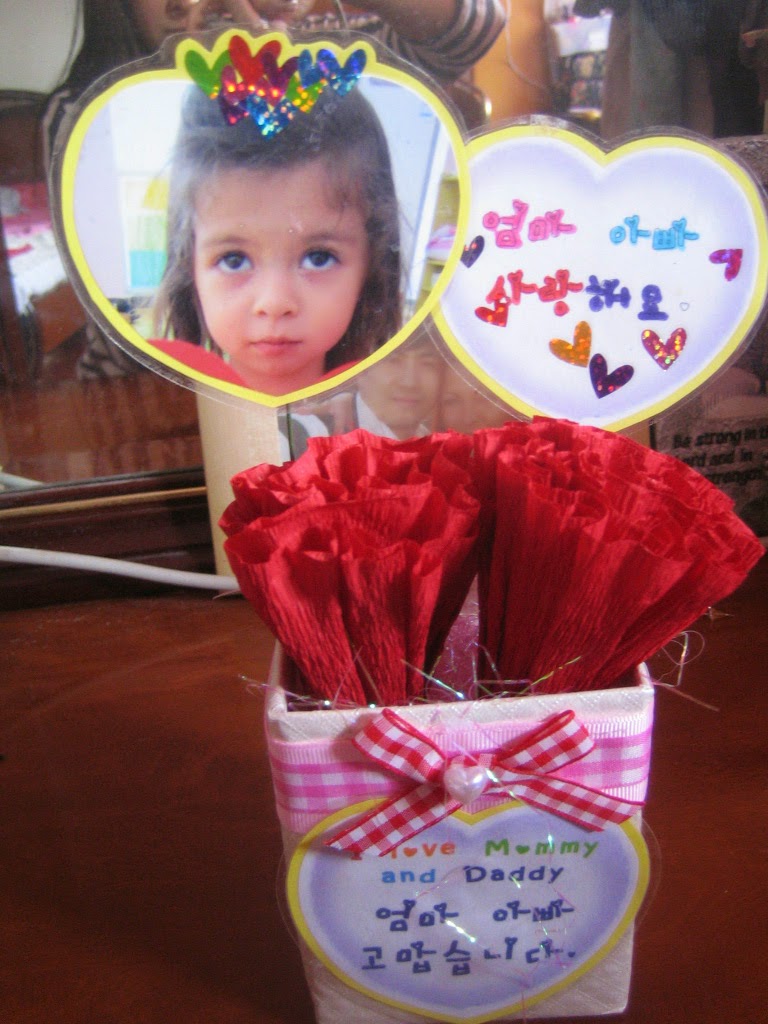 Ok, ok. So she didn't make this on her own of course. I think on this item, Teacher Kelly is responsible. But it's so adorable! It says "Mom Dad I love you" in Korean on the top. And I just love the face she's making in this photo. Here's a closer look... 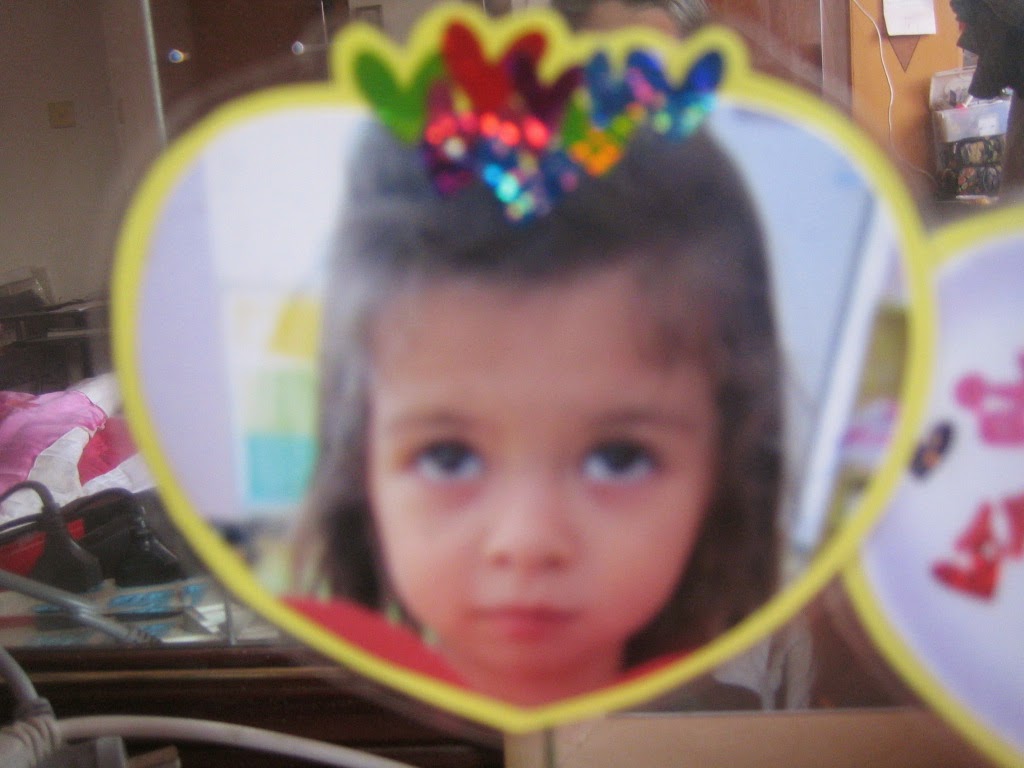 Look at that face! It's like she's giving us that "Please don't be mad at me" look. Seriously, I can't stay mad at anything when I look at this face! 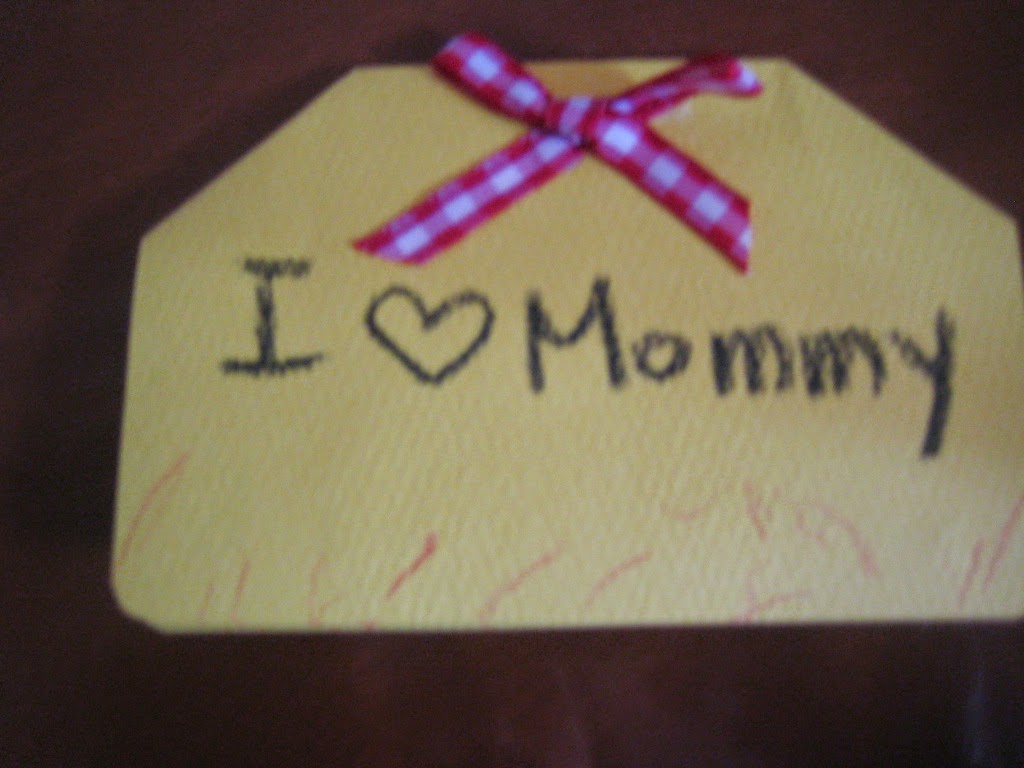 There were also cards. 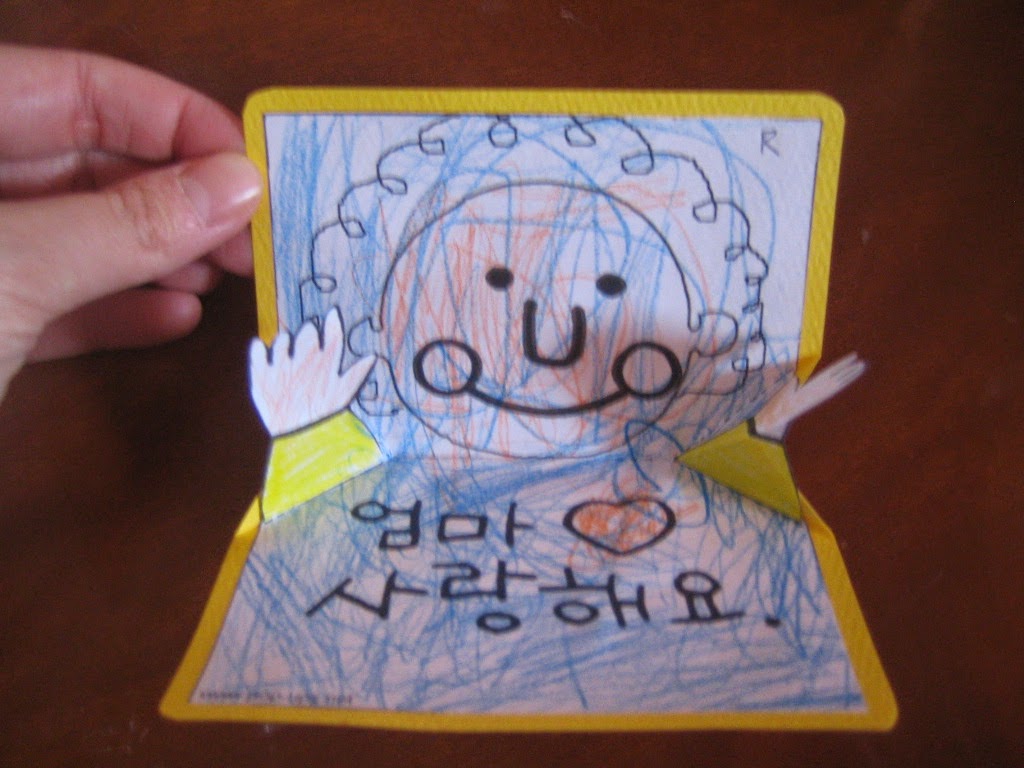 This one is mine. It says "Mom I love you" in Korean (oema saranghaeyo). Raelynn obviously did the coloring. 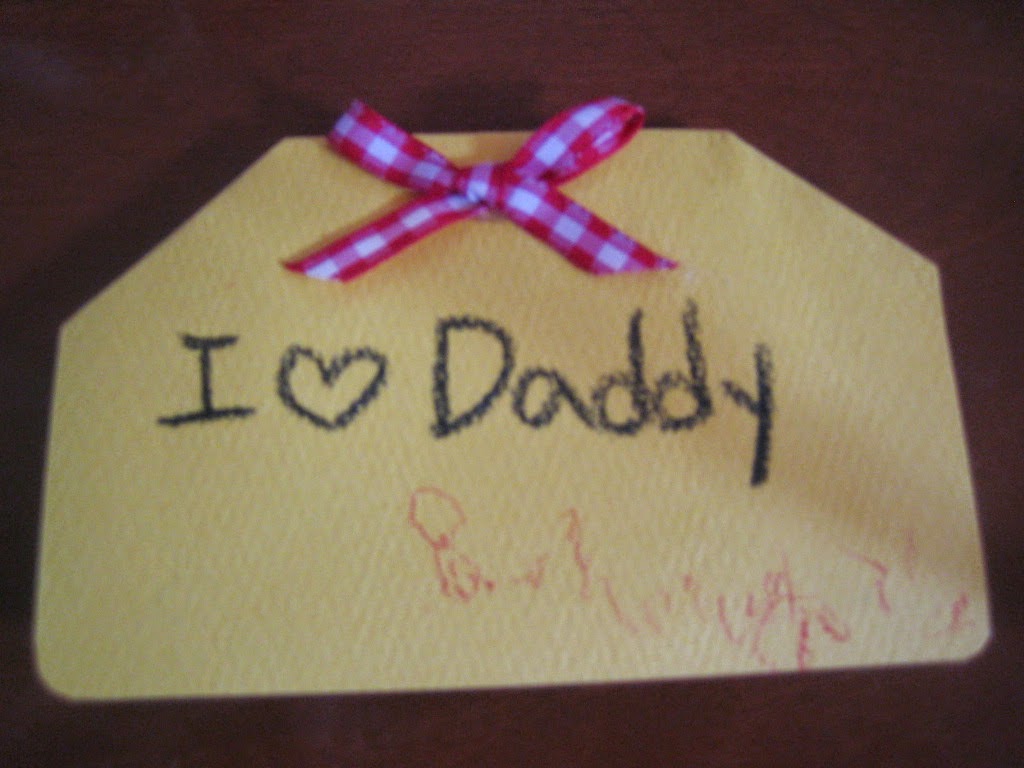 Jeremy got one too. 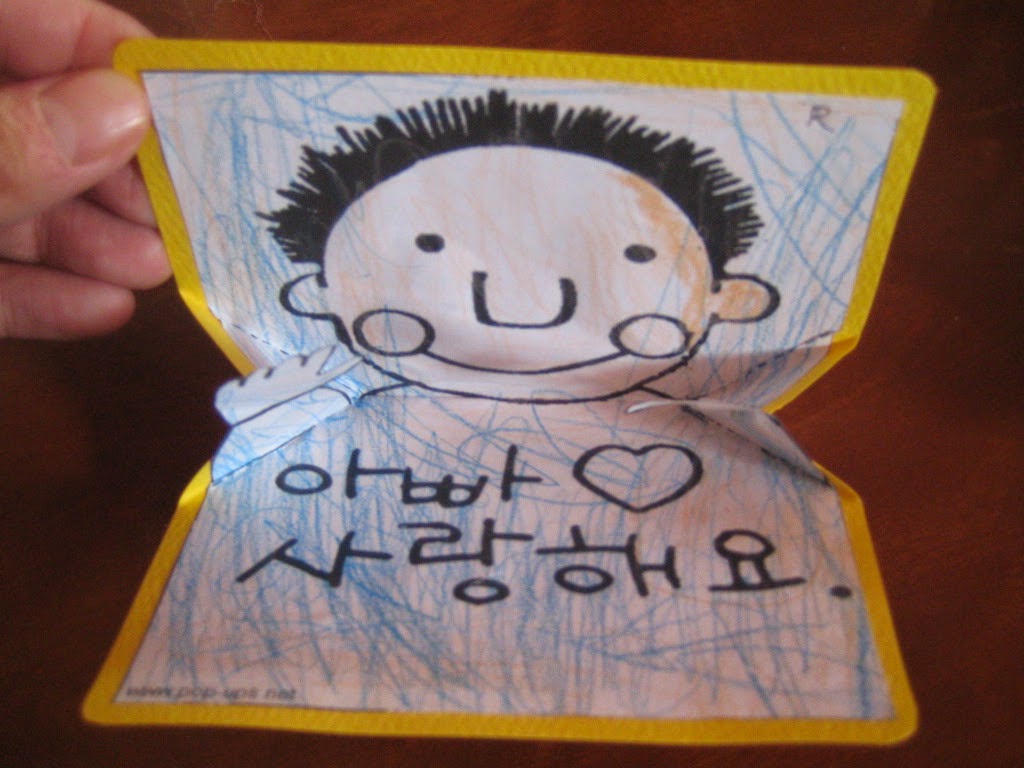 I love it. Even though we don't celebrate Parents Day. Jeremy and I celebrate the American holidays for both Mother's Day and Father's Day. Which means this Sunday, someone should be spoiling me rotten. I can't wait!
Posted by JQ at 6:53 AM