Sorry to disappoint, but the in-laws began to slack on their countdown to Christmas. Then again, we've been too sick to notice. Again, my germy students thwarted my attempts at staying healthy and spread some of their sickly goodness on over to me. Joy! The school nurse informed me that I had a fever on Thursday and recommended I go home and rest. I would have been fine just sleeping in the nurse's office except they chose this week to replace all the heaters in the school and her quarters were freezing. I wound up putting my head down on my laptop until my Korean teacher tapped me on the shoulder and told me to go home and get some real rest.

When I got home, MIL watched Raelynn for me while I rested. And then when I awoke, she said she'd make wontons, which she makes rather well. Only this time, she served them to me floating in some very unsavory seaweed, and I'm a gal who likes her seaweed. I didn't have much of an appetite to begin with either. After all, it was 4:55pm that she was forcing me to eat dinner. For once, I didn't want to be a complete bitch because it was nice of her to help me out when I felt so ill, but I couldn't suppress my laughter about how early it was. I even reminded her that I wasn't an old person in Chinese but she just laughed, thinking I was joking. I told her I wanted to wait for my husband to come home but she poo-pooed that and forced me to eat then.

That night, Raelynn fell asleep in less than 5 minutes. I thought it was too good to be true. Until she woke up an hour later and was acting a bit odd. I should have known it then but hindsight is always 20/20, isn't it? Anyway, she kept me up most of the night between wanting breast milk even more than usual and then, getting out of bed to pull things off the dresser and hit her dad with (which, I must admit, was hilarious). Neither Jeremy nor I slept very well that night.

I managed to make it back to school on Friday, but barely. My fever left me alone all day but made a return visit in the afternoon. Just in time for when I arrived home. My in-laws were planning to have dinner with us anyway to celebrate the winter solstice. Chinese people love to celebrate these kind of things and I have to admit, I think that's really cool. They make jiaozi (that's the Chinese word for "dumplings") for the occasion. I was excited about getting a chance to nap until I found out poor Raelynn had a fever, and suddenly her nutty nighttime behavior made perfect sense. My in-laws and my husband assured me that I should just get my rest and they would give her some medicine.

About that:
One thing that I find absurdly idiotic about China is how they administer medicine to infants and small children. In the states, we have those droppers and nicely-flavored liquids that go down with little fuss or objection from the wee one receiving it. I have a few of those for fever only, thanks to my parents and also Phillip and Kimmy. So when Raelynn has just a fever, or is teething, I can drop in some fruity deliciousness and she doesn't scream and run away from me like someone in a Friday the 13th movie.

The medicine for babies and infants here all smells horribly. No matter what you get or where you get it from, starts as a powder that you must mix with a little hot water to dissolve it. Then, you're supposed to take this concoction by way of spoon and pour it into your child's mouth. If I could describe the smell to you, I'd say it was like burnt dried leaves, that horrid star anise thing, rotten tea and death rolled into one. My in-laws have better success feeding it to Raelynn for several reasons:
1) Many things MIL makes are smelly, perhaps even smellier than any medicine we've had to give Raelynn.
2) MIL never lets Raelynn feed herself even though she can totally do it. Jeremy just bitched at her about that the other day, but she shot him down on that. I would have hollered some but I was too sick to make a sound. Way to drop the ball though, Honey. She has until Raelynn's 2nd birthday to knock that shit off before I knock her off. In any event, perhaps this is why Raelynn doesn't run for the hills when MIL shoves a spoonful of shitty medicine in her face.
3) My husband loses his temper at me for not restraining her properly (because if I don't hold her hands out of the way, she whacks the spoon and goodbye medicine!) and begins his bellowing which, if you know me, I'm not having it. So she associates her daddy's bad temper with the bad medicine.

Now I'm feeling better and it seems Raelynn is improving too, though I have to tell you all, I'm beat. At points during the weekend, she wouldn't go to sleep unless I was holding her so I became a makeshift pillow. Any attempt to lay her down onto the bed was shot down with an instant screech of disapproval from her. My neck and back ache, but I'd do it all again just to have her feel all better.

In fact, my husband said he'd ordered me a crock pot and some measuring cups for Christmas. None of those things have arrived yet (but all the toys we ordered for Raelynn have, thankfully) and it's okay with me, as long as Raelynn is healthy again. It's all this mommy wants for Christmas. Here's hoping Santa will make that happen. 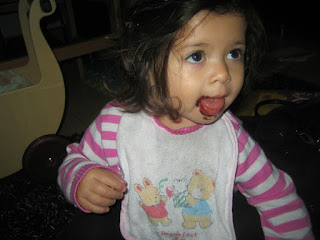 And so we can all feel better, here is a picture of Raelynn licking her face after she had her first taste of chocolate pudding. Awwww!